Commuters in Queenstown may have to get used to taking the bus as the local council tries to solve the resort town's traffic woes.

At peak times, the roads often become gridlocked and that is causing headaches for both locals and tourists alike.

But it is the locals who may have to bear what the council calls painful measures to help fix the problem. 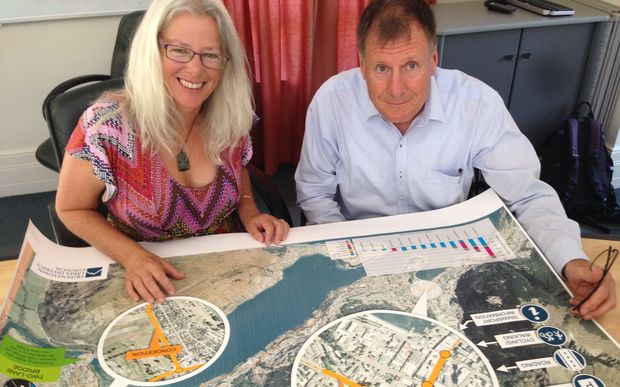 Queenstown District Councillor Alexa Forbes said getting commuters out of their cars wouldn't be easy.

In a draft strategy, released on Monday, the council has outlined an aim to get 20 percent of vehicles off the roads over the next five years.

It would do this by putting up the price of car parking in downtown Queenstown and forcing people to park on the outskirts of town and take the bus.

Those are two scenarios in a raft of measures which aim to alleviate downtown gridlock.

"I think we're gonna see some pain before some gain ... But over a period of time I think they [will] look back and say we have a better scenario," Ms Forbes said.

The strategy proposes a four-pronged approach, addressing: parking costs; whether to build bigger roads; public transport like buses and ferries; and transport information - like real time signage at bus stops, which tells people when the next bus is coming.

The council's principal infrastructure planner, Dennis Mander, said one way to get cars off the roads was to put up the cost of parking in downtown Queenstown and plough that money back into public transport.

"We certainly can use parking to try and foster improvements and we see the opportunity to use parking revenue to improve public transport services and infrastructure," Mr Mander said.

But for workers and shoppers, who liked being able to park close to the town centre, the new measures did not sound appealing.

Many told Radio New Zealand News they liked being able to park close to town and that more parking was what was needed.

However, some conceded if the cost of carparks was greater, they would consider taking the bus instead.

Ms Forbes said one thing that the council would not be doing was building bigger roads and highways to fit more cars.

"We cannot look at that and that sort of engineering solution and expect [it's] going to solve the problem of people getting into this town; the modelling shows it doesn't," she said.

District councillors will be asked to adopt the draft strategy at their meeting on Thursday.

From there, the public will be able to comment on the proposals before the strategy is adopted in June.