Minister of Transport Michael Wood is adamant it's time to get on with building light rail to Auckland's airport - but it's not likely to be finished until the next decade. 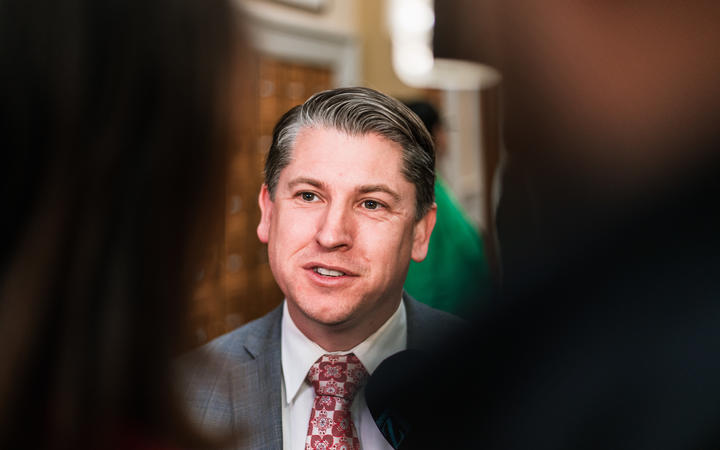 A government working group has presented a new proposal for Auckland Light Rail at billions of dollars more than the original cost and well-behind initial timeframes.

The group came up with three options:

Minister of Transport Michael Wood told Morning Report "this project has talked about for over 10 years by central government and local government and we campaigned on that last election and said would get the process moving.

"We think it's time to move forward with it and there's a clear recommendation from the establishment unit that we should, and Cabinet will make its decisions before the end of the year."

The cost had blown out but Wood said the establishment unit had identified that "yes, it is a significant investment, but the benefits stack up and there are more benefits than costs.

"Ultimately, with these kinds of investments, there's no free lunch … we should have been investing in this sort of infrastructure decades ago in Auckland and our bigger cities we didn't, and I don't think we should keep kicking."

While the Crown would likely foot a lot of the bill, the government was in discussion with Auckland Council, Wood said.

"We've also identified that there is a significant opportunity for what's known as value capture, which is for those property owners who benefit economically from this project to also contribute towards it, and possibly about $2 billion to $3b of the cost could be brought in through that mechanism.

"That will potentially defray some of the costs and ensure that those who benefit are also contributing to it, so we have been working through these issues."

The preferred option has a combination of tunnel and some over ground elements.

The preferred option, this is the one that has some tunnel, some tunnelling in some over grounds.

The establishment unit had identified that option would support higher level of urban growth from 50 to 60,000 additional houses over and above what we would not get with the investment.

"But all of the options stick out. The disruption (caused by the current City Rail Link works) is an important point that is something that we've heard clearly.

"We've engaged with people through this process and obviously through CRL, so we're sending in a really clear message that from day one of this project there will be appropriate support, including financial support for those who experienced significant disruption and we'll look to work through the details and then at the next stage." 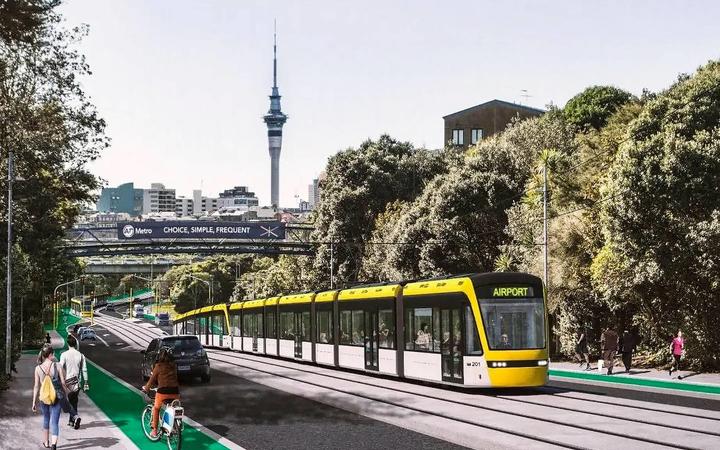 An artist's impression of light rail in Auckland. Photo: Supplied

The project would likely not be completed until the 2030s

"The estimate for the project is that once you get to the point of full-on construction, it's around about a six- to eight-year process until you complete the project. That's why we should get on with it."

Wood welcomed bipartisan support for the project given the likelihood it would span across different governments.

"I will always welcome that and will always be open to conversations with colleagues across the House about these sorts of significant intergenerational projects.

"Ultimately though, the lack of that can't hold us back in my view, we campaigned on this. We received a clear mandate for the last election. For decades we've had under investment and high quality public transport. And we need to get that up a full network for Auckland as well, which is about how we also get rapid transit to the North Shore in the northwest as stage one of the broader plan.

"So I'd love to get broad support for that."

However, there had been a lot of talk and a lot of planning - and it was time to get on with it, he said.

Travel time to the airport on the new system would depend on the option used.

Full tunnelled would be the fastest, Wood said.

"It offers a central city to airport journey time of around about 30 minutes and then it's a bit longer if you go to the other options.

"One really important point I would make (is) a relatively small proportion of the journeys on this project will be about giving from the central city to the Airport.

"The vast majority will be people getting to work, going, shopping, visiting people, moving around their communities."

It would be one of the largest infrastructure projects in New Zealand history, Wood said.

"It is very, very significant."

Funding would need to come from a range of investments.

"The main way that we intend to fund the sort of long-term infrastructure is through long-term funding.

"That's an appropriate and prudent thing for the Crown to do, but we are, as I said before, exploring the value capture option for this, whereby if people get particular economic benefits through their property values rising, we look to bring in some of that value.

"There is no doubt that the investment is large."

Dominion Road Business Association manager Gary Holmes told Morning Report the cost was eyewatering but he supported the value capture approach being proposed whereby those who would benefit from the work would help fund it - through higher rates, for example.

Holmes feared that the area may never be the same again if it lost is unique ethnic restaurants if it were hit hard by construction disrupting business.

"If we were faced with (a six to eight year) construction period and the sort of impact that would have, many of our businesses have simply said it would not survive...

"Because our livelihoods are at stake we are not giving up until light rail along Dominion Road is off the table once and for all, and we are prepared to throw everything at it to avoid that happening."