A government working group has presented a new proposal for Auckland Light Rail billions of dollars more than the original cost and well-behind initial timeframes. 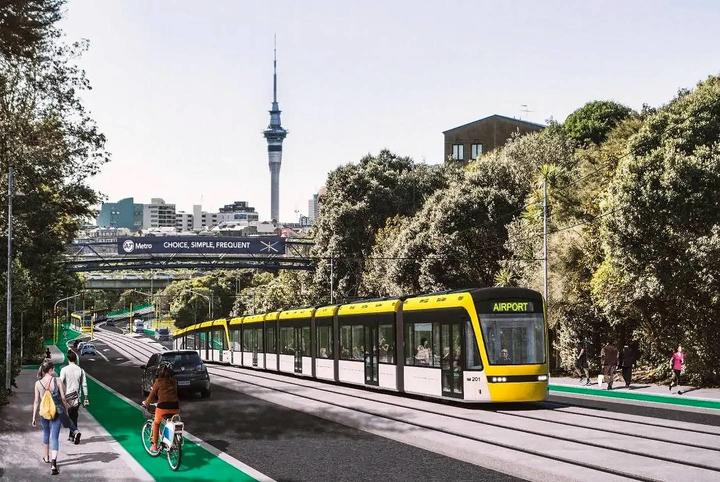 The Prime Minister Jacinda Ardern promised to build light rail from downtown Auckland to the airport within a decade ahead of the 2017 general election.

Progress on the major transport project was slow-going and then completely stalled last year when Labour's coalition partner New Zealand First refused to support it.

Transport Minister Michael Wood sent light rail back to the drawing board in March, tasking a group of experts to develop a business case to revive the project.

That group has come back with three options, ranging from a Melbourne-style tram to a London-style underground metro, that each pack a larger cost and timeframe.

The first option 'Light Rail' would be a modern tram that runs on the surface of the city's streets, separate from traffic but following the motorway.

This is the cheapest of the three, coming in at an estimated $9 billion.

The second option 'Light Metro' would travel through an underground a tunnel under densely populated areas and on the ground's surface through non-urban areas.

This option has the greatest transport capacity but also comes with the highest price tag, sitting at an estimated $16.3b.

The third option 'Tunnelled Light Rail' would see a modern tram running through an underground tunnel from Wynyard Quarter to Mt Roskill before coming up to street level in the direction of the airport.

This option is essentially a hybrid of the first two options, priced at $14.6b, and came out as the working group's preferred option.

Although the economic analysis favours the Light Metro option, the group found it delivered fewer benefits than the other options and might restrict long-term transport options.

Light Rail will likely require partial and full road closures for period of three to five years and disrupt central areas, like Queen Street and Dominion Road, for several years.

Light Metro and Tunnelled Light Rail have reduced surface impacts but both require tunnelling under many areas that will likely experience significant disruption.

The group found all three options have a cost-to-benefit ratio of more than one and recommended the project be developed by the Crown, Auckland Council and Mana Whenua.

It said significant investment would be required by both central and local government; the Crown expected to fund most of the project's capital costs.

Cabinet will make final decisions on the route, mode and delivery by the end of the year with a view to start planning and design work in early 2022.

A new delivery entity will be set up either within Waka Kotahi or as a completely new company to take the project construction.

The working group recommended further investigation into its preferred Tunnelled Light Rail option to sure up scheme design, costs and schedule.