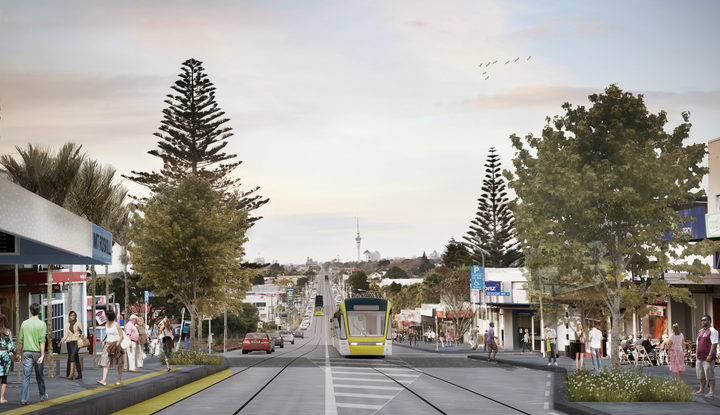 At a public meeting last night, the Public Transport Users Association and NZ Transport 2050 said the government had got it wrong.

In April the government and Auckland Council released the details of a $30 billion plan for transport in the city. It allocated an initial $1.8bn for a light rail network for trams connecting the city and Auckland Airport.

The Transport Agency, which is leading the development of the light rail, said the route and total cost will be released later this year.

Paul Miller of NZ Transport 2050 said the trams should be ditched in favour of trains to and from the airport.

Mr Miller said Auckland desperately needed to focus on building infrastructure that would grow with a fast-growing city.

"Anyone that's been down the south western motorway near the airport in Wiri would know that it's pretty much all grassland between there and the actual airport itself - a distance of about six and a half kilometres.

"We're saying that that should be a track with heavy rail tracks and linked up to the main line," Mr Miller said.

The exact route for the airport to city link is yet to be confirmed, however NZTA has said it will connect Queen Street with Dominion Road, Mount Roskill, Onehunga and Mangere.

Niall Robertson has been living near Dominion Road since 1984 and said the light rail line would ruin it.

"It's an iconic Auckland road, if you let these people loose down here God knows what they've got planned other than this," Mr Robertson said.

"I think Dominion Road has always had a special character that Auckland's always been very proud of and I believe a light rail network down the centre will destroy Dominion Road and destroy the character," Ms Cooke said.

"We aren't saying we've got the solution, what we're trying to do is reignite the debate publicly about what is best for the airport."

Mr Reeves said they had approached the Transport Minister Phil Twyford with their proposal, but did not receive a response.