Prime Minister Jacinda Ardern says the border security guard who had not been tested since last November lied to his employer First Security about the tests he was supposed to have had. 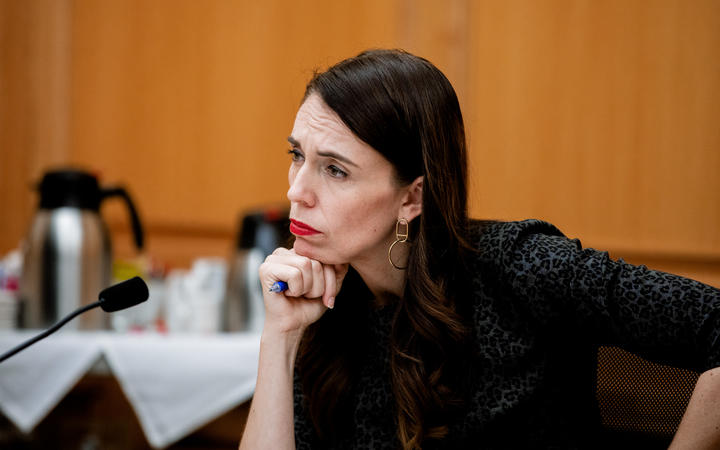 Health officials also had to call in the police, to help with contract tracing after the guard tested positive last week.

The guard is Case B in the most recent cluster, and was last tested six months ago - despite a requirement to be tested fortnightly.

MBIE chief executive Carolyn Tremain made the startling revelation at a health select committee hearing at Parliament this morning.

First Security says it has "current proof of up-to-date Covid-19 testing from all guards working at MIQ facilities and [is] keeping independent records to government-provided registers and tools".

The hearing was also notable for Labour MPs actively stonewalling opposition questions about the security guard and the broader testing and reporting system.

Under questioning from National MP Chris Bishop, she confirmed the guard should have been tested every two weeks but there were "inconsistencies" in the testing records and her officials were still checking the data.

"What we are in the process of doing now is verifying with the employer what their records are."

Ardern says this was a "very particular circumstance" because testing information comes from employees and in this case "the individual was lying to their employer".

"For this person, of course, they were employed by First Security. Their employer is responsible for making sure that they are fulfilling the regulations that they are getting tested.

"Ultimately though, that employer needed to have checks and balances in place to make sure they were still doing what was required," she said.

Tremain told reporters employers and employees are responsible under the health border order to have the testing done and "as a consequence, we just need to triangulate that information to see whether there's anything different to what we understand".

In a statement, First Security says it has met "all government-mandated Covid-19 health and safety obligations and requirements" and that "all guards are required to sign declarations that they are up-to-date with the Covid-19 testing".

Furthermore, it says before each shift guards have to do a health screening check, carried out by the Health Ministry.

"If a guard's status shows they are non-compliant in the Border Worker Testing (BWT) system, First Security takes all necessary steps to ensure testing is undertaken."

It says it has "current proof up to date" Covid-19 testing "from all guards working at MIQ facilities".

First Security says as "this individual is still recovering from the virus at the Jet Park quarantine facility we will not be commenting further on his case until he has been released and we are able to complete an investigation into his compliance with Covid-19 testing protocols".

Tremain was unable to explain why the records were inconsistent and could not say how many MIQ workers had missed tests they were legally required to take.

At a 1pm media briefing, Covid-19 Response Minister Chris Hipkins announced it would mandatory to report testing data to the National Register from 27 April, which would make it easier to gather and check border testing information is up to date and accurate.

National leader Judith Collins said she was "floored" to hear the news.

"The public has been promised for months that all of the frontline border facing staff were being tested regularly," Collins said.

"And now to find out [the guard] hasn't been tested for months and he's the staff member who's got Covid? It's just unfathomable."

Opposition MPs were left openly frustrated during the hearing chaired by Labour MP Liz Craig, in which there were attempts by Labour MPs to run interference on questions from National and ACT.

National was also scathing about the 20-minute "lecture" at the start from the most senior officials running the border regime and health response, which ate into the time available for opposition questions.

Bishop told reporters he had "seven or eight" pages of questions and to be "curtailed" by government MPs asking patsy questions was "pretty depressing".

"The government should reflect on the enormous power that they have as the largest party in the Parliament and our first single-party majority government under MMP and be cognisant of the parliamentary responsibilities of the opposition, to hold the officials to account," he said.

Collins wants the Epidemic Response Committee to be recalled, an opposition-run committee set up during last year's lockdown.

The government has a "transparency" problem, she told reporters, after the "farcical nonsense" at the committee.

"This is supposed to be something where we can actually get answers. If Chris [Bishop] hadn't done his job, when were we ever going to get told?"

Covid-19 Response Minister Chris Hipkins told Checkpoint the employer - despite having the ability to - had not been double-checking the information about being tested from the individual.

"We've got an investigation going on into exactly what information the individual was supplying and also what were employers doing to verify the information they were being given."

He would not say what the repercussions would be but that options include fining the guard and the security firm.

Hipkins said border staff were being routinely tested, and records showed 90 percent were tested within required timeframes. About 87 percent of the 10 percent that had not tested usually got a test within a day or two after the timeframe, he said.

"This does appear to be an outlier, in the sense that this person ... has somehow managed to slip through the cracks for a long period of time."

He was awaiting the investigation's findings but the onus was on the employer to ensure protocols were being followed.

"Ultimately the responsibility ... [to] verify [if] the employees were being tested sits with First Security."

The government employs First Security for its MIQ facilities.

Hipkins said the investigation would reveal what was going wrong with the "reasonably effective" system in place as they worked to make it better.

"The sign-in and sign-out process at each of our managed isolation facilities has been standardised and digitised that will matched back to the testing register."