If an MIQ worker refuses to be vaccinated and their employer can't find them other work, they should "not necessarily" lose their job, Unite Union says.

It comes after it was revealed that the latest MIQ workers to test positive for Covid-19 had not been vaccinated against the coronavirus yet.

Unite Union national secretary John Crocker told Morning Report: "People can't be terminated for some of these reasons. There's a worst case scenario here we don't want to run into which is someone has a legitimate medical reason for not getting a vaccine (being terminated for that) would be a disaster.

"We're trying very, very hard to avoid terminations, because there are situations out there which are just a terrible look and unfair on each individual."

Crocker believed that employers would be "very keen" to not let people go.

But it was appropriate for new border workers to be required to have the vaccination when starting a role, he said.

The union had not heard of any genuine resistance from its workers, Crocker said.

"Those who have been hesitant have wanted more information and as far as I know, we've been able to get it.

"I think it's time for the ministry to look at itself. I think we're all a bit surprised that this outbreak has happened through two security guards who weren't vaccinated and I think the government really needs to look at its processes rather than look at these workers."

He was "fine" with the timeframe for vaccinations for frontline workers.

"We always knew we had 10 weeks from late February to the beginning of May ... it's going to be difficult if those conversations come up (with employers about not being vaccinated) ... some people are going to have legitimate reasons for not getting the jab as well, so it's going to be a question of 'how can we find them other employment where they are not disadvantaged at all'."

The union often heard stories about discrimination faced by MIQ workers and some who weren't getting the living wage, Crocker said.

"They're feeling pretty fatigued by this whole process."

The Opposition says any border worker who has not been vaccinated should be removed from the frontline immediately.

National leader Judith Collins said there should have been a clear expectation from the government from the outset that anyone working on the border would need to have vaccinations once they became available.

"It is simply unacceptable when we have Covid-19, the only way into this country is through the border, that we have our frontline staff and border workers not vaccinated," she said, and it was "imperative" people were removed from those frontline positions immediately.

There had already been too many false assurances about what had been happening at the border, Collins said.

"We've already seen Covid-19 has come in the last little while through unvaccinated staff and we have been assured time and time again by the government that people were being vaccinated ... that they would have everyone vaccinated."

Collins also wants a clear definition of what a border worker actually is, so the government had a much better picture of what was happening with the border workforce, particularly around the vaccination programme.

She said National was "very concerned about the lack of information".

"The government has not actually properly defined what is the border worker or frontline staff and it appears that around 20 percent of the people who they are calling border, or work as a frontline staff have not yet been vaccinated," Collins said.

"If Covid-19 comes into this country it's through that border and the fact that two months after the vaccinations became available, the government still can't actually define who is a border worker or frontline staff is woeful, and we expect this to be fixed now." 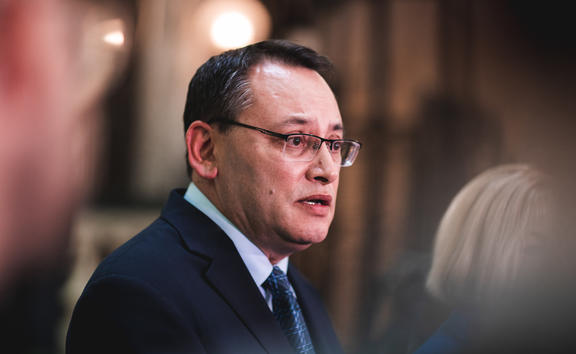 National's deputy leader Shane Reti told First Up if an MIQ worker refused a vaccine, redeployment to a low-risk workplace should be considered.

He supported giving people the choice to have the vaccine or not but he was also unimpressed that some frontline workers had not yet been vaccinated.

"We've had a long time to figure out a vaccine programme, we've had the vaccines available and we've identified as a high priority this group. How hard can this be?... It sort of eludes me."

Yesterday, Director-General of Health Dr Ashley Bloomfield said frontline workers would have until the end of April to be vaccinated or be removed from their role.

He said they were working to get those workers vaccinated or moved out of the front line.