Judith Collins is looking to the future where she envisions herself as leader, and the party as the best opposition ever. 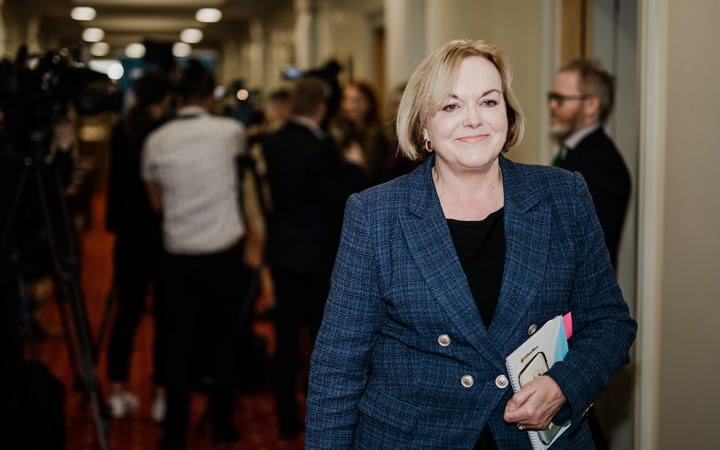 What's left of the National caucus gathered at Parliament yesterday to nurse election wounds and devise how they'll emerge again as a political force.

MPs spoke of a sombre mood behind closed doors but there were hints of belligerence from leader Judith Collins who said her party were united and would provide "the best opposition ever" for the next three years.

Collins told Morning Report it was always going to be a big ask as very few governments ever lose after a single term.

"No first-term opposition under MMP has got more than 30 percent.

"What's really clear is New Zealanders haven't changed their first term government in 45 years; they always want to give them another go to see if they'll actually deliver on the promises they got in on."

Collins was looking forward to the review which would also investigate selection processes, the constitution of the party, what went wrong and how the party could do better.

"It's never ideal to have three leaders of the opposition during a campaign year."

Asked if she thought the party ever had a shot at winning she said: "I always felt that we could but it was going to be very, very difficult. There's always a possibility, I've always believed in being positive. It was always going to be a very big ask."

She said yesterday the party farewelled some "excellent" colleagues and today it would look at staffing "which is also terrible".

"We just get on with the job."

She didn't believe the party lost due to its policy framework but said it needed to be in the public eye for longer.

The party would now go back and refresh the policies it was working on the last three years. "It's not like we're starting from ground zero."

On the aftermath of her comments about obesity just days before the election she said: "We should've shut that down pretty quickly but that's ... will be subject to the review.

"We're opposed to the sugar tax."

She said then the public would turn to National's policies where there would be something better.

She expects to still be party leader at the 2023 election.

"Leader of the opposition, leader of the National Party is a massive privilege; it's not a job that people should desperately want to do, it should be something that's chosen by the caucus. I'm very happy to do that job."

Collins said the party needed stability and knowledge on how to do the job - and she brought that.

The plan was now to bring up the party position back up, because "we can't win it in the 20s, that's very obvious".

Following months of leaks and resignations, Collins didn't believe the public was worried about the internal workings of the party.

"I haven't noticed the fighting amongst ourselves."