Judith Collins has spoken to media after the National Party's first caucus meeting since the election, which returned their worst result in years.

The party, which last term had 54 seats, finished with just 35 seats due to their much lower party vote, some 21 fewer.

Collins says there is no economic plan from the government and that is what they will be focused on in opposition.

"It's onwards and upwards for us and we are determined to be the best opposition ever."

"I'm really positive about our way forward ... I particularly relish the opportunity to hold the government to account."

She says it is "very sad" to farewell so many caucus members, and the party has talked about the review the National Party is undertaking as well as the campaign itself.

"We're very sorry to see them go," she says about the MPs who will be departing after the election result.

She says there was no self-pity from the MPs who were departing, and while it was a sad occasion there were also moments of humour.

"Adversity is a time to show character, and I saw immense character today."

As it stands, National has just two Māori MPs - Simon Bridges and Shane Reti; one Asian MP in Melissa Lee and 11 women in a caucus of 35. The increase in diverse representation in new Labour and Green MPs has however meant the coming Parliament is set to include more women and ethnicities than ever before.

Collins says diversity and representation is important and it's something the party will be looking at when it comes to selections and in the review.

"All of the people who came into our party and our caucus, who happen to not be Pākehā, they were all there on merit," she said. "It's the time to do it - we've got the opportunity to do it and we should do it now."

She says it was very sad to lose some colleagues who represent areas and communities of New Zealand that "we're not representing in the way that we want to".

"We're going to do our very best to make sure we do exactly that and some of our now-former colleagues are keen to come back and want to be very much involved in what we're doing - and we will be taking up those offers."

Decisions about portfolios will be made after the special votes are returned, she says. The party will also not be throwing away the policy discussion work Simon Bridges started, saying that was very useful and will continue to be.

She says she has asked the caucus to be a part of the review of the campaign, which the party carries out after each election.

"They'll be mostly listening ... it was a very, very constructive caucus meeting," she says. 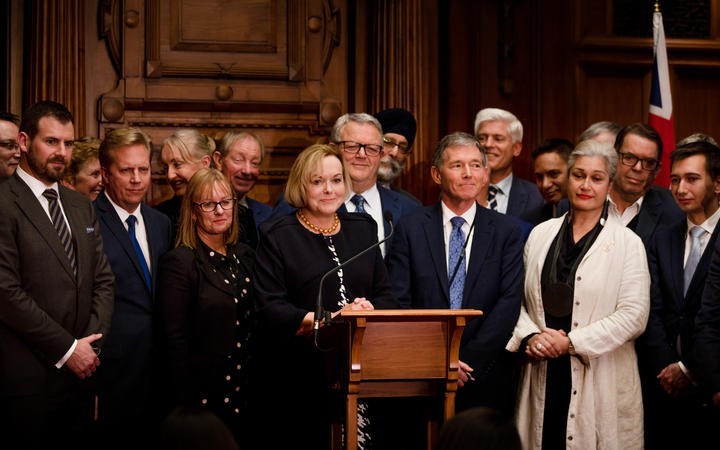 The National caucus when Judith Collins took over as leader in July 2020. Photo: RNZ / Samuel Rillstone

She admits there are some things she thinks she could have done better, but "that's the nature of the beast".

The review will not be once over lightly, she says, and will be a good opportunity to review the party's constitution.

Collins has continually said she was happy in her role as leader and would not want to change it, although that is a matter for the party.

Collins has also previously admitted that having three leaders in four months leading up to the election was not a good look.

Bridges, who was leader after Bill English resigned following the 2017 election until May this year, said he supported Collins "100 percent".

Collins would not say if her deputy Gerry Brownlee, who was also the campaign manager, should stay or go after losing his Ilam seat over the weekend to Labour's Sarah Pallett.

Brownlee this afternoon said he was looking forward to being part of the review process. He said Christchurch needed a National presence and as of the election that would not be the case.

Collins said the party was working on a buddy system for new MPs to show them the ropes, and it was very important because Parliament could be a lonely place.

Smith said decisions would not be made until the special votes were counted.