Power Play - Last night's Newshub debate felt more like a "pub quiz" at times for Jacinda Ardern, but she stood her ground against Judith Collins making for a more lively affair. 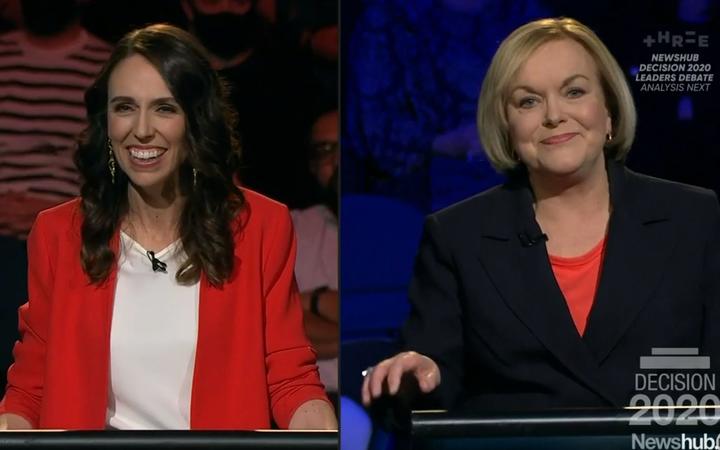 The interaction was much more dynamic than last week's. Ardern was more assertive, more willing to challenge her opponent but also to engage with her on areas of common ground, saying afterwards she'd made the call to "speak up more" after the first election debate. Collins was again in high spirits, swinging from raucous laughter to serious emoting.

And they agreed on a few things: holding an inquiry into Pharmac, ways to help young women afford sanitary products, extending the parliamentary term to four years, the need for gender neutral toilets in schools and that it's not yet time to rename New Zealand 'Aotearoa'.

But the winner on the night was Collins' one-liners:

On meat-free Mondays: "I'm not going to tell people when they can eat their meat - I'm not into communism or fascism".

On being on the cover of Vogue: "Absolutely would I like to be there. I tell you what Paddy, any political leader who says they wouldn't is a liar".

And on Winston Peters' chance at re-election: "As a Christian I do actually believe in miracles but I tell you what, he ain't gonna be one of them".

There were times, though, when her approach jarred, most notably when she patronisingly asked Ardern "what for, dear?" during an exchange about climate change.

Serious topics were traversed; both laid out their plan to lead the country through the Covid crisis and were pretty much on the same page, with an acceptance of the debt levels, strong border control, a push towards a vaccine and opening up to other countries only when its safe.

Ardern made sure to highlight her experience, cutting across Collins when she was talking about keeping businesses open unless there was evidence to the contrary. "The advice and the evidence I can already tell you because I've read it and know it well," she interjected.

Collins threatened to go back and look at making some big businesses - which may have stuck to the rules but not the spirit of the massively expensive wage subsidy - pay the money back.

She also talked about having ACT as a government partner, and a willingness to have its leader David Seymour as deputy. However, she wasn't signing on to rolling back the firearms reforms - including the banning of most semi-automatic weapons, although she would make exceptions for pest control and sports shooters, but the newly established firearms register would be gone.

Collins' increasingly frequent references about being a Christian were interesting ("I'm a Christian and a feminist") - perhaps speaking to right- leaning voters trying parties like the New Conservatives on for size.

A personal revelation also from Ardern. When asked about cannabis in the past Ardern has used the euphemistic "I was once a Morman and then I wasn't" to say she had smoked weed without actually saying it - but last night she just said she had "a long time ago".

Another nugget was her backing of the Green School funding decision that landed Greens co-leader James Shaw in such hot water. "We supported, we funded it, when you make a decision as a government you have to back that decision".

Housing fired up again with both leaders challenged over their party's record; there was acknowledgement from both house prices were rising too quickly. Collins aggressively took the opportunity to once again point out the failings of KiwiBuild and push for major reform of the Resource Management Act, familiar and well-trodden ground.

During a discussion about gangs Ardern got the upper hand. It was a topic you'd expect Collins to capitalise on, but Ardern turned her criticisms about an increase of gang numbers back on her - "because when you were Minister of Police the Rebels came into New Zealand and took a foothold here and your response was to issue a press statement saying they should leave".

The economy was once over lightly, touching on debt and letting Collins away with saying there was only "one" mistake in the party's economic plan.

This debate followed hard on the heels of a much-derided US presidential debate. Both leaders in New Zealand chose their words carefully when talking about Donald Trump when asked "yes or no - is he a dangerous influence on the world?".

"I will work in New Zealand's interest and that means if democracy delivers Donald Trump that's who we work with," replied Ardern.

Collins agreed they had to "work with who the leaders are ... but what I can tell you, he has actually done some recent stuff with Israel and UAE [United Arab Emirates] ... so actually that's better than war don't you think?".