President Donald Trump and his Democratic challenger, former Vice President Joe Biden, faced off in their first debate of the campaign, with Trump talking over his rival and the moderator as he sought to hold the spotlight. 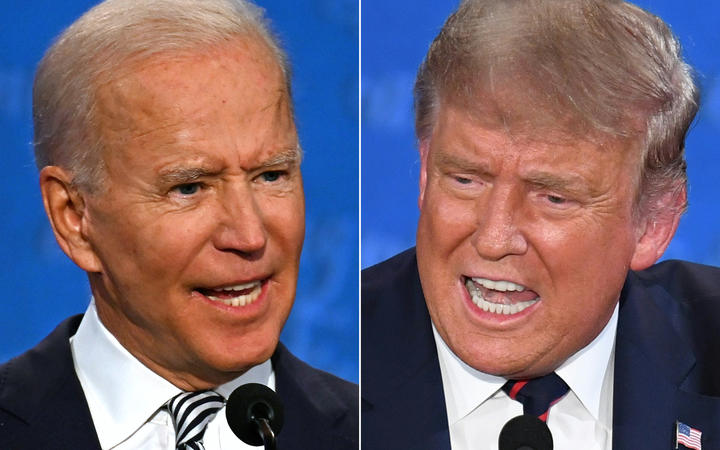 Here are takeaways from the matchup, the first of three before the 3 November election:

Trump is used to sparring with reporters, and he spent the debate using the same tactic he uses in the White House briefing room: interrupting.

Throughout the 90-minute debate, Trump repeatedly talked over Biden and moderator Chris Wallace of Fox News, overshadowing attempts to discuss policy and drawing rebukes for breaking the rules that both campaigns had agreed on to ensure that both candidates had equal time.

"Please let the vice president talk," Wallace admonished Trump during one of his interruptions.

"Will you shut up, man?" Biden said to Trump, one of many times he directed the president to be quiet.

The effect was exhausting, for viewers and, seemingly, for the moderator, who conceded at one point that he was having trouble following.

"That was too hot," Chris Christie, the combative Republican former New Jersey governor and adviser to Trump, said on ABC, while also criticizing Biden's performance.

"It's been an interesting hour and a half," Wallace said at the conclusion of the debate with a chuckle and, with a nod to the follow-up debates in next few weeks, said there was more to come.

'Stand back and stand by'

Trump deflected a question asking him to condemn white supremacists and militia groups, instead calling on one group to "stand back and stand by" and then attacking left-wing activists.

Senior federal officials, including at the FBI and Department of Homeland Security, this month warned that white supremacist groups pose a rising threat of violence in the United States.

There was no opening handshake on Tuesday night because of Covid-19, but the body language between Trump and Biden still took center stage.

Trump scowled at his rival for much of the debate, or wagged his finger or waved his hand to dismiss his Democratic opponent.

Biden, meanwhile, regularly gazed into the camera when Trump interrupted him to make a direct appeal to the American people.

Trump "doesn't want to talk about what you need - you, the American people. It's about you," Biden said at one point.

While Trump spoke, Biden shook his head, sometimes broke into a smile or a laugh, and occasionally simply stopped speaking and kept silent in exasperation.

Trump didn't mince words when Wallace asked him what he paid in federal income taxes in 2016 and 2017, after the New York Times reported that his tax returns showed only a $750 payment in each year.

Offering no evidence, Trump said he had paid, "millions of dollars. And you'll get to see it," despite his refusal to release any returns since he became a candidate in 2015, breaking with decades of tradition.

Trump attempted to walk a fine line, claiming he owed a hefty tax bill while also defending his efforts to pay as little taxes as possible and blaming Biden and former President Barack Obama for helping him to do so via the tax code.

When Wallace turned to Biden, the Democrat quickly pivoted to his economic plan, saying he would repeal Trump's tax cuts that largely benefited corporations and the wealthy, and the discussion turned to the trillions of dollars those proposals represent.

Left unmentioned were many of the allegations in the Times report: tax deductions for hair styling and private jets, no income tax paid in 10 of the last 15 years, a massive $72.9 million tax refund that is the subject of a long-running audit.

It may have been a missed opportunity for Biden. He has worked hard to reach out to the working-class white voters at the heart of Trump's base who might be particularly offended by Trump's miniscule tax payments.

Presidential candidates invite guests to debates with a calculated purpose: to emphasize a core campaign theme.

Ann Dorn, whose retired police officer husband was killed amid anti-racism protests in St. Louis in June, was among Trump's guests, a month after appearing in a video on his behalf at the Republican National Convention. Trump has hammered away at a "law-and-order" message in response to widespread civil unrest over police brutality and racism and accused Democrats of failing to support law enforcement.

Biden's guests included Kristin Urquiza, whose father, a Trump supporter, died of the coronavirus after dismissing its deadliness. The former vice president has sought as much as possible to turn the campaign into a referendum on Trump, and specifically on his handling of the outbreak, which has killed more than 205,000 Americans.