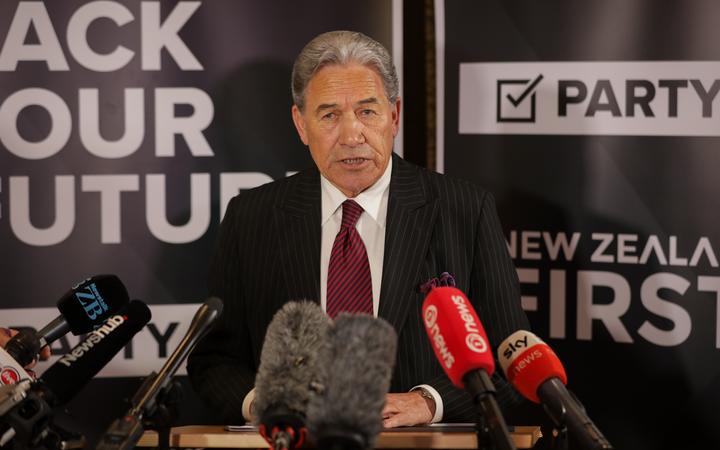 As things stand they will have name suppression until the first scheduled hearing on October 29th, well after the election on the 17th, which is why RNZ and Stuff are going to court to try to get the suppression lifted earlier.

The charge laid against each of the defendants last Wednesday is of 'Obtaining by Deception' and carries a penalty of up to seven years in prison.

NZ First fought tooth and nail this past week to delay the SFOs announcement of the charges until after the election; failing that they forced a qualifier into the statement, saying the two people charged are not "a Minister, sitting MP, or candidate in the upcoming election (or a member of their staff), or a current member of the New Zealand First party". The original statement said neither defendant was "a candidate in the upcoming election".

If Peters truly believed the party was exonerated, why fight so hard to get public confirmation of the outcome delayed?

The risks for the party as expressed by its lawyers are obvious, that the public directly links these charges to New Zealand First and, bound by the time restraints and sub judice, it would not have the time or the full ability to fight back.

The strategy from Peters all along has been to try to put up a wall between himself, New Zealand First and the Foundation at any suggestion of wrongdoing. He'll continue to push that line hard as that's the political cover he is seeking, accompanied by claims of biased and politically motivated actions by the SFO.

After the charges were announced, Peters claimed complete separation through a legal nicety; that the party is a "discretionary beneficiary" and the Foundation provides financial support for policies not political parties.

To say that's dancing on a pin is an understatement.

The whole point of the investigation relates to activity between the party and the Foundation, whether payments should have been treated as donations and several reported examples of interactions between them. Whether or not the charges end up being proved doesn't change the existing relationship between them.

Peters and NZ First are now going after the SFO in the High Court claiming an abuse of statutory power, comparing themselves to Hillary Clinton in 2016, and the SFO as making a "James Comey" like political intervention into a national election.

"Once the untested, and ultimately fallacious allegation was published, the damage was done," argued the NZ First lawyers.

Trouble is, Clinton took a clear hit in the polls as a result of the FBI probe whereas NZ First has been performing sluggishly in opinion polls for a protracted period of time. If the party can't show a material hit to its level of public support its argument is weakened.

Not a lot of sympathy from the bench when faced with the argument NZ First would face significant disadvantage at the polls if the charges were announced before the election. In his High Court judgement Justice Matthew Palmer said while he accepted the "risk of confusion and a negative impact" that was outweighed by "public interest in voters being informed during an election campaign about criminal charges of serious fraud against people or organisations related to political parties".

The legal battle though is by no means over.

Back in July, NZ First had already started to challenge the SFO for putting out a statement its investigation would be done by the election - at that point still scheduled for 19 September.

NZ First said that "clearly demonstrates inconsistency of treatment... between two political parties being investigated in relation to the same issue".

'The assumptions upon which you proceed in this regard are baseless," it countered.

Peters still has the SFO in his sights and will take action in the High Court, alleging an abuse of its statutory powers. Hard to see how that could improve NZ First's electoral chances except for the publicity it could generate. A long bow, but perhaps laying the ground for a later challenge to the election result itself.

He will use this now to pitch himself as the underdog, as being hard done by, as a party under siege by powers that want to see it gone, and one that deserves another chance.

Whether voters now have the time and inclination to take heed is another matter.