Advance NZ co-leaders Jami-Lee Ross and Billy Te Kahika have challenged MediaWorks' decision not to include their party in its multi-party debate in the High Court. 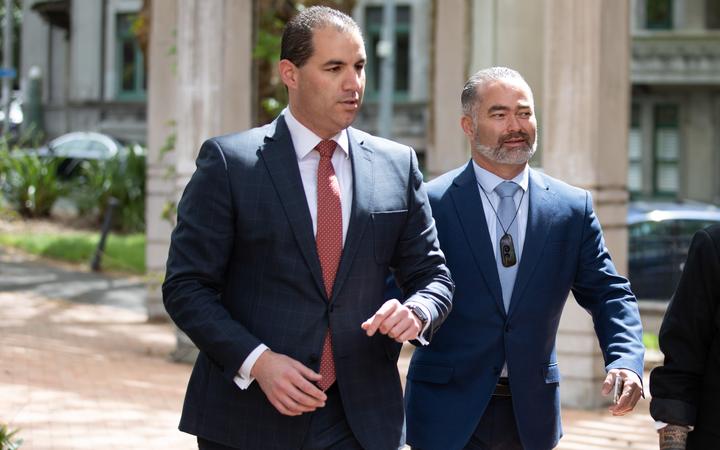 Ross and Te Kahika yesterday filed an urgent interlocutory injunction application against the network after it excluded Advance NZ from its PowerBrokers clash.

New Zealand First, the Green Party, the ACT Party and the Māori Party will feature in the Newshub Nation debate on 3 October, which will focus on the political parties that could be in a position to help National or Labour form a government after the election.

To be included in the debate, political parties must have won at least one list or electorate seat in the past two electoral terms.

Media received legal advice when considering the criteria in July.

The lawyer representing Ross and Te Kahika, Honor Lanham, argued Advance NZ could be in a King or Queen-making position.

"They are polling similarly to the Māori Party and New Zealand First, with just as much chance of winning an electorate ... they have a leader with governance experience and is presently in Parliament," Lanham told the court.

Lanham pointed to the lack of polling in electorates, saying it makes it difficult for the court to determine how successful a candidate is likely to be.

The Advance NZ co-leaders accepted the television network has criteria for its debate, but said it should be "reasonable or rational", Lanham told the court.

Advance NZ's popularity on social media was also raised by Lanham, who suggested it too shows the party could be in a position to form a government after the election.

"Advance NZ has more than 43,000 people following its Facebook page ... that can be contrasted to five other parties ... but more than that, when you look at specific types of social media content and the responses that have been received to them, we can see Advance NZ has had incredibly popular video content online. Some of their videos have been viewed over 256,000 times," she told the court.

"Subject to manipulation, I'm not suggesting that's the case here, but despite its nature ... one doesn't know the geographical location of supporters or people who engage. They could be off-shore, they could be ... under-age.

Jordan Grimmer, who was assisting Lanham, told the court Covid-19 had impacted election campaigning, so Advance NZ's exclusion would have more of a negative impact on the party as air time is more valuable.

"Indeed what broadcasters do in this very special and important arena can influence voters' decisions and is thus a very vital part of New Zealand's democracy and I say that is particularly so in the Covid-19 election season," Grimmer said.

The lawyer representing MediaWorks, Justin Graham, stressed the PowerBrokers debate is not focused on minor parties, rather those that could be in a position to help form a government.

"What is essentially sought by the applicants in this case is to transform it into a minor party leaders' debate," he said.

If it was a minor party debate, the flood gates would open, he added.

"We would undoubtedly have requests for attendance from parties such as the New Conservatives and The Opportunities Parties, who have had superior polling results to Advance NZ," he said.

There does need to be a cut off applied by broadcasters, Graham told the court.

Graham argued both Ross and Te Kahika have recently had decent airtime on the MediaWorks network, appearing on Newshub Nation and The Hui in recent weeks.

MediaWorks accepted that leaders' debates are important, generally popular and a party would be impacted if it wasn't included. It also accepted broadcasters in an election period must act with fairness and balance.

Justice Walker has reserved her decision until about 2pm tomorrow.