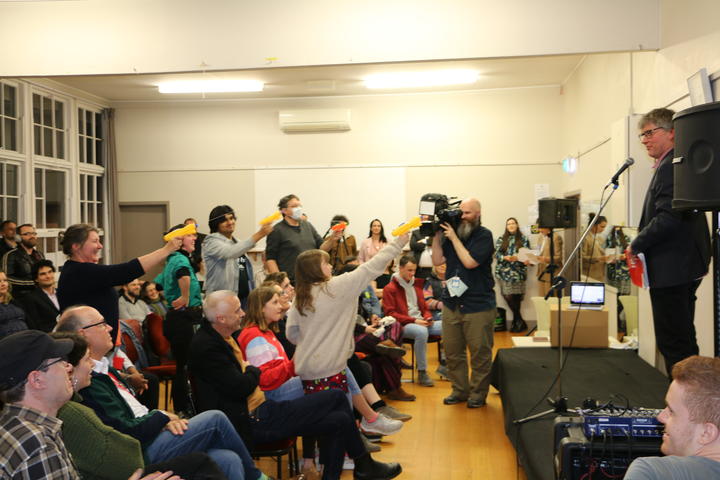 Strict social distancing made the Wellington Central debate a slightly more subdued affair than normal, but there was still plenty more entertainment than you're average campaign event.

Usually about 100 people pack the Aro Valley hall with hundreds more spilling out into the park to hear the local candidates pitch themselves to their inner city Wellington constituents.

Last night numbers were strictly capped at 50 - plus candidate supporters and the media - with all the physical distancing and contact tracing we've come to expect this election season.

Green Party candidate and co-leader James Shaw noted the more muted vibe and acknowledged the efforts of a lone heckler shouting from outside while doing some classic political pandering.

"This guy is doing a pretty good effort at filling in for the 200 people who aren't normally in the room.

"The Aro Valley town hall [debate] I think is basically we have elections in Aotearoa/New Zealand - so that we can have this particular piece of political theatre."

The candidates are given five minutes to make their opening remarks - any longer and the water pistols come out.

ACT candidate Brooke van Velden pushed hers beyond the limit, and her raincoat came in handy as the sound of the pounded piano signalled her soaking should commence.

Despite the levity of the event, it is still politics - and it wasn't long before the political hits started to be made.

"It is like a cooler, hipper version of the Green Party that likes evidence and science and stuff." 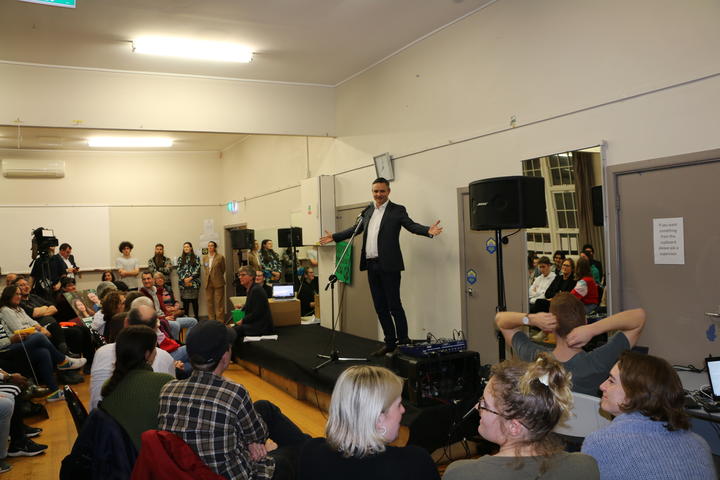 And the National Party candidate Nicola Willis softened James Shaw up with some kind words about his bipartisan work on the Zero Carbon Act before socking him over the Green School debacle.

The incumbent and Labour Party candidate Grant Robertson pointed out Shaw had squandered a chance to take a crack at the Green's nemesis at the Cabinet table.

"I thought James you missed an opportunity to be funny there.

"Because I thought - when the question was 'what's the barrier to decarbonisation' - I thought you might say 'New Zealand First'. But you didn't."

The lightening question round loosened the audience up, and their clear favourite was the youngest candidate - the 18-year-old independent Jesse Richardson.

His platform of environmental issues and youth representation resonated with the young crowd. 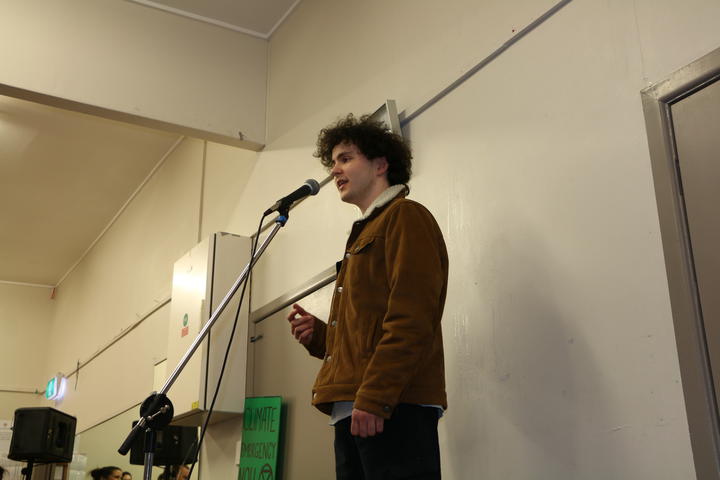 And he made probably the best - and darkest - joke of the night.

"It's kind of a shame this is the round where we are supposed to try and be funny because this is probably the one issue I don't really have any jokes on.

He drew spontaneous applause time and again, with shouts of amour meeting cries about the barriers to diverse representation in Parliament.

Audience member Emily said she had a really good time.

"I think it was really fun, it was my first time. [My friend] has been before so she set us up with really high hopes for a lot of heckling.

"I think there would have been a little bit more if not for Covid."

The country goes to the polls on 17 October.