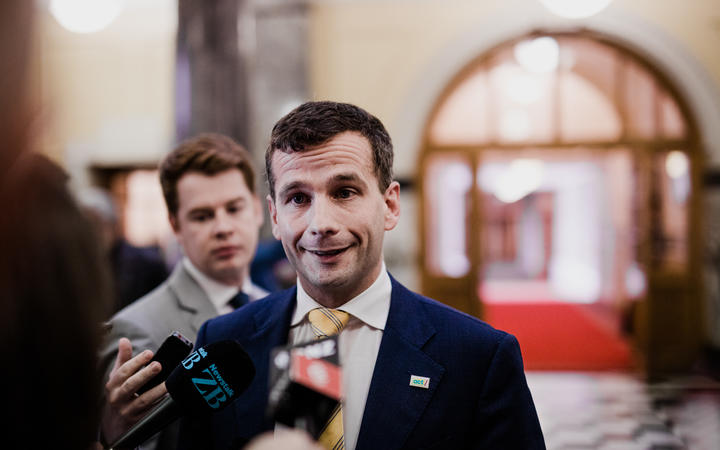 Seymour and New Zealand First leader Winston Peters were each at 1 percent for preferred prime minister.

This was ACT's best poll in 17 years. Here are the likely contenders to make it to Parliament.

The first of course is David Seymour, closely followed by his deputy Brooke van Velden.

"She represents the concerns of her generation, particularly mental health and housing, but through an ACT Party lens," Seymour said.

Van Velden is a Bikram yogi who enjoys knitting and tapestry in her spare time.

But she's no stranger to the halls of power either, having spent the last three years working there, gathering support for Act's End of Life Choice Bill.

If elected, van Velden will focus on reducing generational debt, more affordable homes and better mental health for all.

"The government's spending $2 billion each year on mental health services and yet people are still not happy with that provision. I want to get away from this idea that throwing more money will solve the problem because it obviously hasn't worked," she said.

"What I want to see, and the policy I've created is one mental health and addiction agency nationwide and it would be the sole interface for mental health care for every person in this country."

Next up is hunter, wool spinner and mother of four Nicole Mckee.

"She's been best known for her advocacy in the fair firearm law space," Seymour said.

Mckee was a strong critic of the government's new gun law, passed following the mosque attacks of 15 March.

It is why she decided to throw her hat in the political ring, but it's not the only issue she's passionate about.

"Game animal management has become an issue over the last three years, more so over the last few months. We need to address that from inside the House as well," Mckee said.

Number four on the party list is teacher Chris Baillie.

"Chris was for 15 years a police officer and a youth aid, he's been a secondary school teacher for special needs kids and he'sa small business owner," Seymour said.

Baillie is a proponent of personal responsibility and wants to see more support for small businesses following Covid-19.

He is a big fan of the country's jazz scene and is a bit of a musician himself.

"I play the trumpet in a couple of jazz bands ... for quite a while now, not particularly good, but I really enjoy it. I also played rugby for over 30 years and still enjoy following my local team whenever I can."

He supports the Crusaders.

"As an environmental engineer, he's come to the conclusion it is innovation, not more regulation, that we require to solve our environmental problems," Seymour said.

A man with a green thumb, Court believes in reducing waste to landfill, and wants to see the Resource Management Act replaced.

He's also the father of three high-school-aged boys, the youngest with Down's syndrome.

"I really want to make sure there's a better world for him when he comes out [of] school and training - a world that's more accepting of people and their disability. And I also want to see more opportunities for those people to participate and work because it is good for their wellbeing.

And last but not least, for the moment anyway, is James McDowall.

"James McDowall is a small business owner, a PhD in marketing, someone who works for the Wise Group - a charity where he works on mental health," Seymour said.

He's a self-proclaimed classic liberal, who enjoys photography, travel and spending time with his two-year-old daughter.

McDowall said community engagement was key to being a good politician, and he would do that if elected.

"I think it is critically important particularly with actual law-making. In general members of Parliament should be engaging at all times, but when it comes to creating laws that are going to affect people, you really need to know the other side of the equation."