The Prime Minister's plan to announce a roughly $100 million recovery package for Southland, in the wake of the likely closure of the Tiwai Smelter, was scuppered by New Zealand First at the eleventh hour. 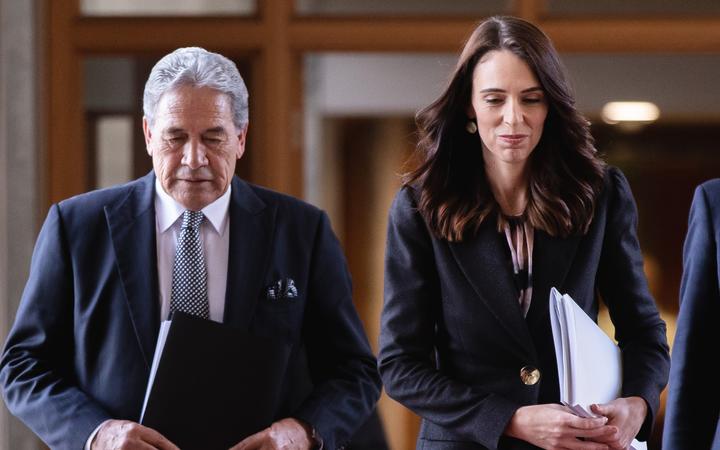 Jacinda Ardern attributed Winston Peters' comment on Tuesday that a Labour-Green government would be a "nightmare" to an imminent close-run election. Photo: RNZ / Dom Thomas

RNZ understands, as a result, there will not be any specific amount of money allocated to the southernmost region before the election, because consensus cannot be reached within the coalition.

Tensions have been building as the election approaches with New Zealand First lining up to fight for its survival.

A week ago, Ardern, Robertson and Regional Economic Development Minister Shane Jones visited Invercargill where they met with Southland mayors to discuss future job opportunities in the region.

That was a week after the smelter announced production would end in August 2021, putting more than 2500 jobs on the line.

It's understood the visit was originally meant to include the announcement of a 'Just Transition' package - similar to what was unveiled in Taranaki after the government banned future offshore oil and gas exploration.

RNZ understands there was back and forth between ministers about a roughly $100m package for Southland, focussed on job creation.

But Peters denies that.

"No, there was no discussion of a financial package for Southland last week - full stop,'' he told RNZ.

He did, however, reveal he told Ardern she was travelling to Southland on behalf of the Labour Party, not the coalition government.

"The prime minister was going down with MBIE [Ministry of Business, Innovation and Employment] and other ministers to talk about the future of Tiwai Point.

"We had a discussion the night before as to the positions the various parties might take,'' he told RNZ.

"The prime minister was very well aware that she could speak on behalf of the Labour Party, but on this matter, not on behalf of the coalition because there was no paper, no agreement, no Treasury analytics to go behind it."

Peters said he had "most certainly not" seen a paper about a financial package or been involved in a conversation about one.

While a financial package did not come to fruition, it is unclear how much money, if any, Southland would have received before the election. However, the failure of the coalition to reach consensus means it is likely to be slower still.

There is a plan on the table, as discussed with the mayors, but still no money allocated to it.

On the same day ministers visited Invercargill, Peters published an opinion piece, saying a buyout of the smelter would be best for workers.

Peters has been advocating for a worker/management buy-out for Tiwai since 2011 and heads to Invercargill tomorrow to make a major policy announcement, understood to be a commitment the smelter would be saved if New Zealand First returns to power.

That is not Labour's position, which Ardern made clear last week while in Southland.

"I saw the position of the leader of New Zealand First, ultimately that wasn't the nature of the conversation that was had with leaders here today,'' she said at the time.

"All of us talked about the transition, obviously Tiwai, various discussions over many years around its future, now we just happen to be working to some hard timelines."

When pressed on whether a bail out or further subsidies were possible, she said: "No, for us it was all about what happens next and on what timeframes. Key for us though - we want to give certainty to this region as much we can. This is a really unsettling time, that's why we're here.

"Today, this is a firm commitment from us that we will work with this region to make sure we are growing those opportunities in the future."

Jones attended last week's meetings with Ardern and Robertson and made his own pre-planned Infrastructure and Provincial Growth Fund announcements totalling $60m.