In his clearest signal yet that the election campaigning has begun, Winston Peters took shots at his coalition partners and previous governments during a fiery speech laying out his plan for Tiwai Point aluminium smelter. 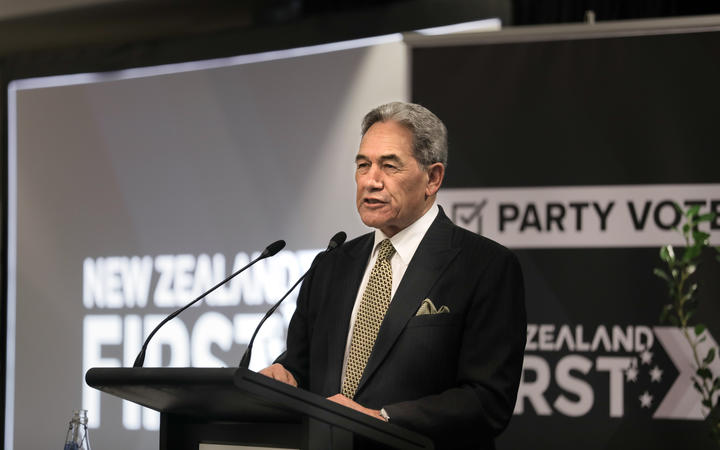 The New Zealand First leader spoke to a packed room at Invercargill's Workingmen's Club this afternoon, where not everyone was convinced by his ideas.

Peters said his trip to Invercargill was about sending a message to locals about what their economy meant to New Zealand First.

In exchange, he asked locals to send a message back to Wellington, by repeating after him: "we've had a guts full and we're not taking any more."

Though there have been murmurs about government or workers' buy-outs, Peters' plan for Tiwai Point instead resembled Back to the Future.

"If we go on having a say in the government, in the future, then we commit to a 20-year agreement with a 10-year review, with a fair electricity cost based on the cost of supply and a respectable margin, we're going to take things back to the beginning and restore justice and fairness here," he said.

Exactly who the 20-year agreement would be with was unclear. Rio Tinto has already said it will exit Tiwai Point at the end of August next year.

Peters insisted his plan was so good, there would be buyers lining up if Rio Tinto did not want to stay in the south.

The people of the south wanted to know how much his promise meant, however. Asked "Is that a guarantee if you're in government, you'll deliver it?" Peters responded, "No, no it goes like this. You vote for me first and then I'll deliver it."

"I don't want anyone fast on the lip and slow on the vote here. You need to buy yourself some assurance here and you're looking at it," he said.

Most locals agreed that Rio Tinto and the general public were getting ripped off on power prices, and supported Peters.

"A lot of it will be outside his control but at least his views are on the right side of the ledger," one said.

Others said it had changed their mind about the selling of the smelter, although not everyone believed Winston Peters was Tiwai's saviour, commenting "most of it was hindsight. I thought he was going to tell us what he was going to do."

Peters said he was offering the people of Southland an alternative to every other political party.

"You want to vote National, Labour, anybody else, or the Greens if you're off the planet, you go right ahead," he said.

He doubled down on that message while speaking to media after the speech, rubbishing the Labour Party's proposed $100 million jobs package for Southland that the Prime Minister had hoped to announce last week.

"If you think we're going to go to an election where we go out to provincial people and flim-flam some country folks on the basis of a pittance of $100 million, with no idea what you're going to do with it, then you've got this election dramatically wrong," he said.

Ultimately, Peters' plan and his party's fate rests in the hands of the voter.