New Zealand First leader Winston Peters has used Parliamentary privilege to name those he believes leaked his superannuation details, but has refused to repeat his claims outside the debating chamber. 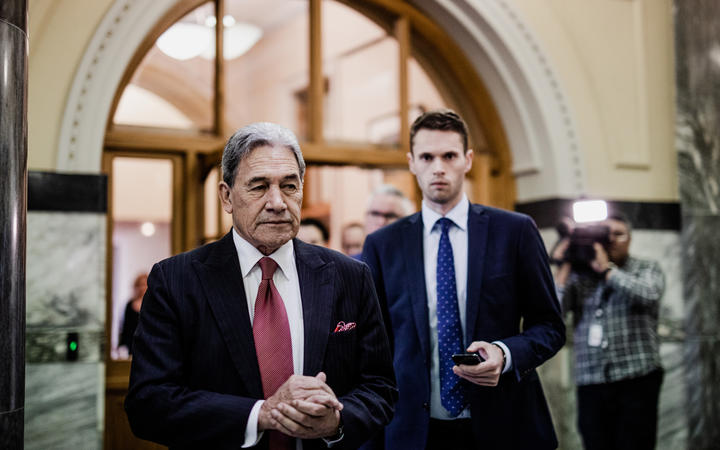 During the general debate in Parliament this afternoon, Peters listed a raft of people he claimed were involved in an "ACT-inspired hit-job".

The accusations have been been met with blanket denials from those named and variously described as "delusional", "sleazy" and "insane".

Peters claimed in the House that he had been told former National Party press secretary Rachel Morton was the original source of the leak.

Morton has denied Peters' claim and said it is "categorically not true" on Twitter.

The claims made by Winston Peters about me today are categorically not true.

He alleged Morton heard about his superannuation details because she was present when former National minister Anne Tolley told her colleague Paula Bennett about it.

"Ms Morton then, thinking it would be kept in confidence, told ACT Party leader David Seymour," Peters said in Parliament.

He then alleged Seymour shared the information with Jordan Williams from the Taxpayers' Union.

"Williams, who is no stranger to dirty politics, told John Bishop - father of National MP Chris Bishop - and the details were then leaked to Newsroom's Tim Murphy.

Peters said Farrar tried to "shut it down" because of the risk to National.

Peters then claimed his source had informed him National Party members had "joked among themselves about the leak but realised they couldn't do anything with the 'no surprises disclosure' their risk was too high".

"That of course didn't prevent Ms [Anne] Tolley from telling her sister, nor did it prevent 42 people being made aware of my super case.

"All it took was for that private information to fall into the hand of David Seymour who craved media attention but couldn't claim the limelight because that would've placed a spotlight on Rachel Morton - his source. This is what dirty politics looks like," Peters told the House.

Speaking outside Parliament, he later told reporters he "categorically denies" involvement in the leak.

"I had nothing to do with it, and I never will have, have had, didn't, nothing," Seymour said.

"Winston Peters is a desperate man, making it up, and in this case, telling lies."

National MP Chris Bishop leapt to his feet immediately after Peters and denounced his speech as an attempt to avoid proper scrutiny.

"We all know why it's happened - it's because of the Antarctica NZ story that broke this morning on Radio New Zealand. It's as clear as day," he said.

"Forty years he's been doing this, and he'll continue to do it for as long as he's in this Parliament."

Bishop said Peters was "fabricating things" and making statements he would never say without protection of Parliamentary privilege.

Under the Parliamentary Privilege Act, MPs are immune from punishment by the courts for anything they say in the debating chamber.

David Farrar has described the allegations as "insane" and said he did not know a thing until the story about Peters' superannuation case was published in 2017.

What the actual? This guy is delusional. #ArcticaGate must have legs https://t.co/vNeoczSiZ3

In a statement, Williams said Peters was "lashing out incoherently" to distract the public and journalists from "his own screw-ups."

"Winston's claim that I was somehow involved in the leak of his superannuation scandal is, sadly, pure fantasy. I was not involved in any way," Williams said.

Last November, Peters took legal action against government officials and politicians over the leaking to media before the 2017 election of details about his superannuation over-payment.

Following the two-week hearing, Justice Venning found that although Peters' privacy was breached, he had failed to establish that any of the named defendants were responsible for the leak.

At the start of this week, Peters was ordered by the High Court to pay nearly $320,000 in costs - a judgement he has appealed.