Deputy Prime Minister Winston Peters has attempted to bypass the media, answering questions about the secretive New Zealand First Foundation in a live video on Facebook. 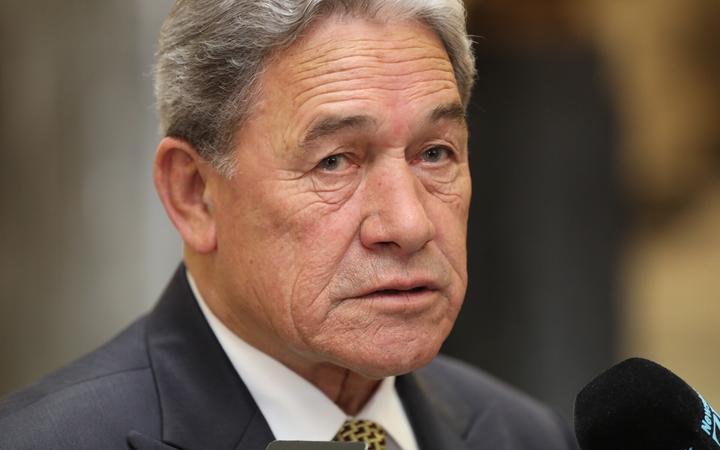 RNZ has revealed the foundation has been receiving tens of thousands of dollars from donors in the horse racing industry in payments which fall just below the $15,000 threshold, at which point party donations are usually made public.

That same foundation is facing the spotlight of the Serious Fraud Office after the Electoral Commission referred its inquiry to the police, who promptly passed it on.

Peters avoided reporters at Parliament today - instead promising to tell the public the truth on Facebook.

He spoke for about 10 minutes and defended his and his party's conduct.

Asked if he would resign as deputy prime minister if he was found to have acted wrongly, he replied: "I did not receive any money. I'm not part of the foundation. And so have I got any information I could proffer to for example, the police or the Serious Fraud Office? No, because I've never seen one of the accounts [of the NZ First Foundation]."

In response to a question on whether it was ethical for RNZ to name people who have donated money under the $15,000 threshold, and could RNZ be sued for breaching privacy, Peters responded: "What a fascinating question and I'm going to leave that to the police because that is one of the questions we're going to ask them.

"The reality is someone has stolen information here. We are pretty certain who that person is and it's capable of being traced but we're going to leave that to the police to decide."

He said people were entitled to keep their identities secret if they were under the threshold. "...if we don't have such a system of public fundraising, taxpayers would have to pay and we're diametrically opposed to that."

He said all the donations as far as he was aware had come from New Zealand legal entities or residents. In response to one questioner he said he was very confident none had come from Chinese Communists.

Peters, who is also the racing minister, said for 30 years he had been talking about the need to save the racing industry, which employs tens of thousands of people, contributed $1.6 billion annually to the economy, and was "big in the provinces".

He did not write the current government racing policy - it was based on information from a well-respected Australian expert.

Prime Minister Jacinda Ardern said she was not fazed about the donations her coalition partner receives from the racing industry and she's never asked Peters to disclose the details.

"Racing policy, decisions, bills - as with any decision we make as a government go through considerable scrutiny. No one policy is ever decided by one party, they go through all of us, and in this case have gone before the House and received support from across the House.''

She said at times Peters had gone against the racing industry's wishes and some of the accusations against him were unfair.

"This was an industry that was struggling, the minister's seeking to revive it. Some of it has meant very hard calls that even some in the industry don't like.''

But National finance spokesperson Paul Goldsmith said New Zealand First's cosying up to the racing industry had gone too far.

He has demanded an audit of all funding decisions made by New Zealand First ministers following the latest donation revelations.

"All New Zealanders want to be assure dabout the integrity of decision-making. To reassure New Zealanders, the Minister of Finance should insist we go back and review those decisions,'' he said.

He said the SFO process would reveal there was nothing wrong with the foundation or how it operated.

Asked at Waitangi whether the racing industry was getting a quid pro quo, this was his response:

"No, I think that's really petty to talk to like that.

"I've been a recipient of Sealord's and the dalmation leadership in terms of fisheries, and I resent any suggestion that decisions or statements I make about fisheries are driven because of donations.

"Those donations are within the law,'' he said.

Back in 2008 Peters faced a donations scandal that threw New Zealand First into political exile.

Now faced with similar circumstances Mr Peters has changed his approach, firstly, by being more conciliatory and ordering the party to review its donations.

Secondly, he's found a way to control the messaging by side-stepping the press gallery and speaking directly to voters through his own social media.