New Zealand and 14 other Asia-Pacific countries agreed on terms for one of the world's largest trade pacts, but they say India still has "significant outstanding issues" before will be ready to also sign on. 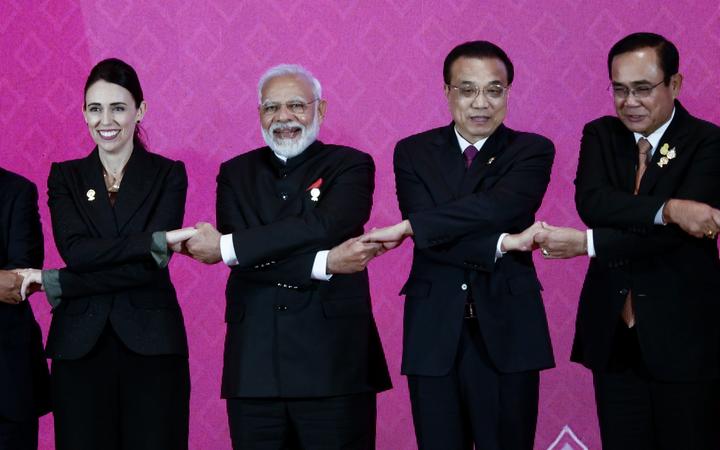 Members said the deal would be signed next year after the 15 countries, without India, reached agreement in Bangkok on the text and market access issues.

India decided not to agree to it yet due to differences over tariffs, its trade deficit with other countries and non-tariff related barriers.

"This has been seven years in the making," Prime Minister Jacinda Ardern said. "And of course, we have free trade arrangements with the majority of the countries who are part of this agreement.

"But what it does do is create a simplicity by bringing all of those nations into a single agreement and that has enormous benefit to New Zealand exporters."

Speaking with reporters late last night, Ms Ardern said she did not sense the agreement ran the risk of falling away in the process.

"But it has been, I think, growing in impatience to see a conclusion. We saw that when Singapore was hosting those negotiations and we continue to see a real desire to see it concluded, and I think now we're getting to the point where we will very soon."

The China-US trade war and rising protectionism had given new impetus to years of negotiations on the Regional Comprehensive Economic Partnership (RCEP), which brings together the 10-member Association of Southeast Asian Nations (ASEAN), China, Japan, South Korea, Australia and New Zealand.

The leaders' statement said the completion of the RCEP negotiations will demonstrate "our collective commitment to an open trade and investment environment across the region" against the backdrop of a fast-changing global environment.

Minister of Trade and Export Growth Damien O'Connor told reporters that the deal would create structure with rules of trade and also give certainty for businesses.

"So that certainty and the structure [the RCEP agreement] will create is the way forward and the growth opportunities that New Zealand should enjoy. If at some stage in the future India say that they can't join up, then the 15 other nations are committed to move on.

"I think at the signing it might not give the immediate benefits, but long-term it probably has the greatest potential."

The ASEAN nations opened the door to India potentially joining them later, if the issues it has with the deal are resolved.

But Indian Prime Minister Narendra Modi said that he had to take into account the interests of Indian people.

"When I measure the RCEP Agreement with respect to the interests of all Indians, I do not get a positive answer," Mr Modi said in a speech in Bangkok, according to a government note.

"Neither the Talisman of Gandhi nor my own conscience permit me to join RCEP," he said, in a reference to "father of the nation" Mahatma Gandhi's maxim to always think of the poorest in society in a situation of doubt.

Mr O'Connor said they have had useful discussions with India but have expressed that any agreement would need to include dairy.

"They realise that we're not going to export all products in a competitive way, it's a complementary way. We just have to sit down and agree on the product lines that they'll allow into their country."

India has been worried that the agreement, which requires the gradual elimination of tariffs, would open its markets to a flood of cheap Chinese goods and agricultural produce from Australia and New Zealand that would harm local producers.

Long-standing rivals China and India, who fought a border war in 1962, also clashed verbally in recent days over India's decision to formally revoke the constitutional autonomy of the disputed Muslim majority state of Kashmir.

Speaking on behalf of Ms Ardern for her weekly spot on RNZ's Morning Report, Education Minister Chris Hipkins said there was always going to be a challenge with getting India on board.

He said the newly upgraded Free Trade Deal with China was another signal of the importance of the NZ-China relationship and China's economy, but part of the reason for pursuing the RCEP was to diversify.

"We knew there was always going to be a challenge with India, particularly their relationship with ... China, and that was going to create some interesting challenges ... we've got real hope, I think, that we can make good progress on this."

Even without India, the countries in the RCEP bloc account for nearly a third of global gross domestic product, but its departure means they have less than a third of the world's population instead of around half.

Chinese Vice Foreign Minister Le Yucheng said: "Whenever India is ready, they are welcome to come on board."