US President Donald Trump has used his United Nations address to fire a searing broadside at social media giants, accusing them of using their "immense power" to limit free speech. 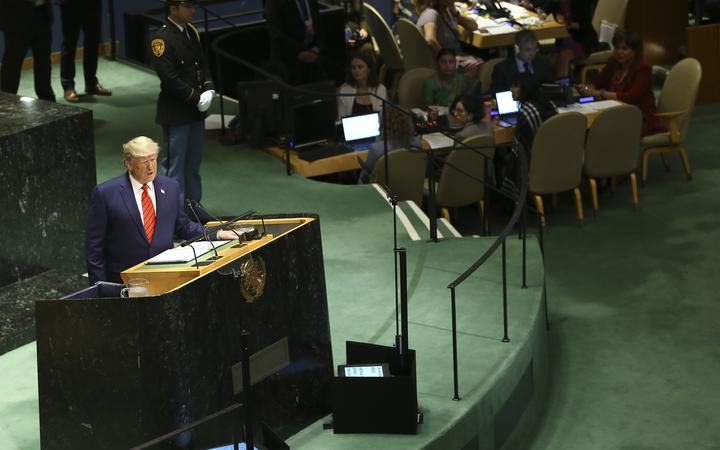 US president Donald Trump speaks at the UN. Photo: AFP

Mr Trump made the comments during his speech to the UN General Assembly in New York, the day after tech companies announced fresh progress on the Christchurch Call at a meeting hosted by Prime Minister Jacinda Ardern.

Support for the pledge to eliminate terrorist content online has ballooned since it was launched in May, with Ms Ardern yesterday announcing 48 countries were now on board. The US, though, has refused to sign up to the pledge, citing freedom of expression.

Ms Ardern watched on from the audience as Mr Trump spoke on Tuesday morning (New York time), warning generally of efforts to introduce "conformity and control".

"Even in free nations, we see alarming signs and new challenges to liberty," Mr Trump said. "A small number of social media platforms are acquiring immense power, over what we can see and over what we are allowed to say."

Mr Trump did not directly reference the Christchurch Call, but derided a permanent political class which he called "openly disdainful, dismissive and defiant of the will of the people".

"A faceless bureaucracy operates in secret and weakens democratic rule. Media and academic institutions push flat-out assaults on our histories, traditions and values."

He said his administration had made it clear to technology companies that it would uphold freedom of speech.

"A free society cannot allow social media giants to silence the voices of the people," Mr Trump told world leaders. "And a free people must never, ever be enlisted in the cause of silencing, cancelling or blacklisting their own neighbours."

Ms Ardern is scheduled to deliver New Zealand's address to the general assembly later in the day. It's understood she will speak at length about the 15 March terror attack - in which 51 people were killed - and the lessons learned.

She'll also focus on the need for collaboration to solve global problems, pointing to the Christchurch Call as an example.

Ms Ardern and Mr Trump held their first official talks at a hotel near the UN headquarters yesterday, but did not discuss the pledge.

The prime minister told media the two had discussed the mosque shootings and that Mr Trump had enquired about New Zealand's gun buy-back.

In his speech on Tuesday, Mr Trump appeared to rule out any tightening of gun rights and said the US would never allow international entities to trample on the rights of citizens to self-defence.

Ms Ardern has spent the day in one-on-one meetings with leaders of various countries including Fiji, Pakistan and Iceland, as well as the president of the European Council Donald Tusk.