Poll of Polls - Labour and National are still neck-and-neck in RNZ's poll of polls but with last Friday's lead reversed. 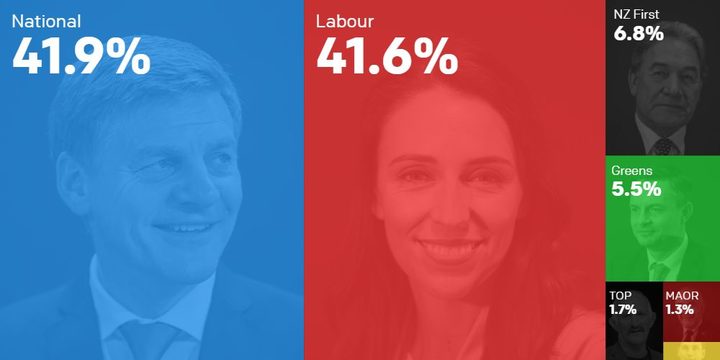 In effect, going into the last week it is too close to call between the two major parties. Tonight's 1 News Colmar Brunton poll counters the Newshub Reid Research poll from Tuesday.

The latest averages translate into 51 seats for each of Labour and National, eight for New Zealand First and seven for the Greens. 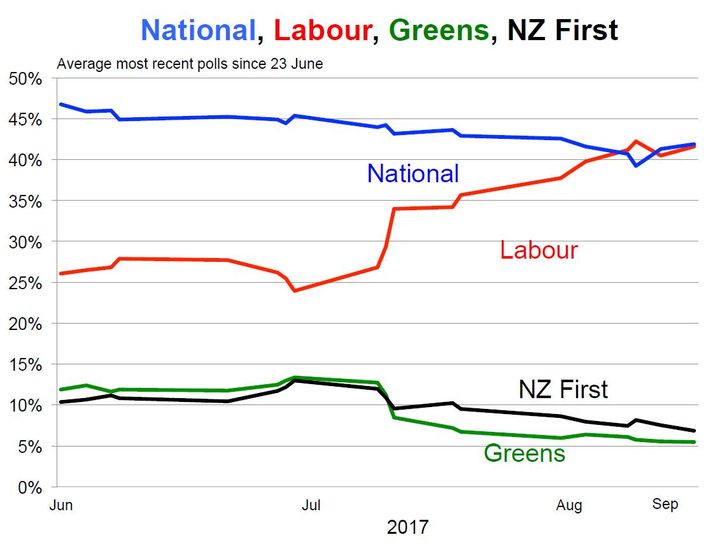 The biggest shift from last Friday is that neither major party can form a majority with just New Zealand First.

That moves the focus to the Greens, and the Māori Party which has 1.3% (1.2% last week) and two seats because it is near certain to win at least one electorate.

ACT is on 0.4% (0.3% last week) and has one electorate seat, assuming its leader David Seymour holds Epsom. Anything below 0.4% would make Mr Seymour's seat an overhang seat, which would Parliament's total to 121. 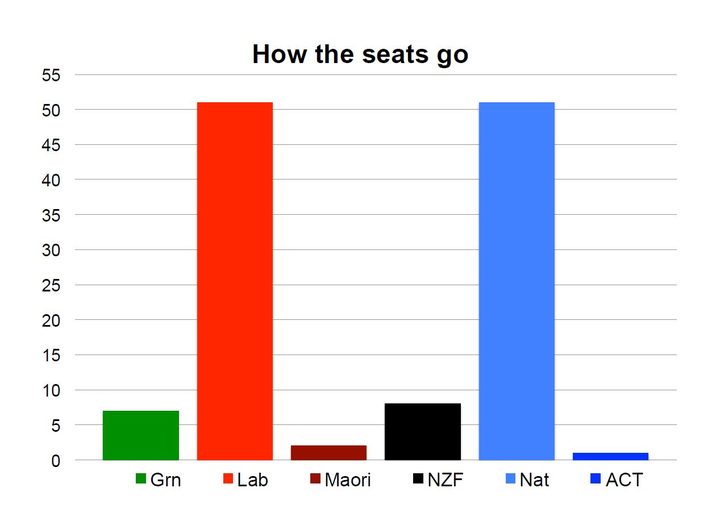 What about the trends?

A week out from the election is there something we can learn from the trends?

In the past, trends drawn through the poll of polls and projected through to election day have pointed remarkably close to the final result. But this year Labour's sudden climb out of the depths to being competitive with National has skewed the trends.

On a trend through 2017 National looks headed for about 42%. The trend since 23 June, three months out from election day, is pointing nearer to 40%. Somewhere in that range does seem reasonable.

For Labour the whole-year figure is 35%-36%, which looks low, and the three-month figure is 43%-44%, which may be a stretch though consistent with recent 1 News polls.

We will run the trends again in the final poll of polls next Friday. But even then the trends should be treated with caution in this unusual election.

The next full poll of polls update will be next Friday, 22 September. If there are polls between now and then we will do a mini-update.

* The poll of polls is an arithmetical average of the most recent major polls from among: 1 News Colmar Brunton, Newshub Reid Research, Roy Morgan New Zealand plus the unpublished UMR Research (for the Labour party) and, from September 2016 to July 2017 only, Curia (for the National party). The Bauer Media Insights IQ poll taken in early September is included. A Morgan poll is expected tomorrow but its sampling was earlier than the 1 News and Newshub polls. The polls are ordered according to the midpoint of their polling period.