Poll of Polls - Labour, on 41.8% has nudged ahead of National, on 41.1%, in the latest RNZ poll of polls in the wake of Thursday's 1 News Colmar Brunton poll. 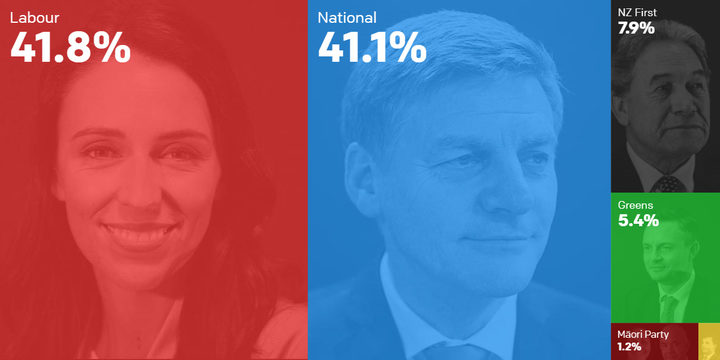 The poll of polls averages the most recent three polls available to RNZ News.

The boost to Labour more than offsets the continued slide of the Greens to just 5.4%. The combined Labour plus Greens average is now 47.2%.

That is 6% ahead of National. (The Greens are actually slightly below 5.4%, National slightly above 41.1% and the gap slightly above 6%, which accounts for the apparent discrepancy in the arithmetic.) 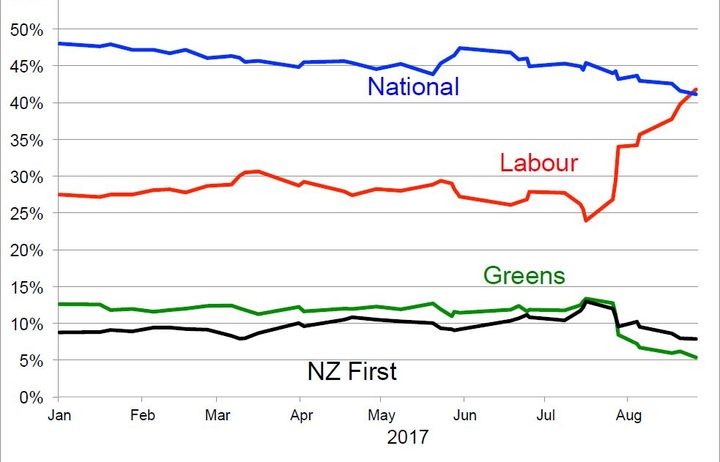 New Zealand First continued its slide to 7.9% from 8.6% a week ago. But that is enough for it to be the decider if the election numbers match these averages.

The Māori Party scored slightly less than 1.2%, giving them one seat, though very close to two, assuming it wins an electorate.

ACT has continued its slide to 0.3%. Assuming National voters keep ACT leader David Seymour in Epsom, the party would get one seat, and it would be an overhang.

The Opportunities Party (TOP) also continued its slide to 1.6% (no seats). 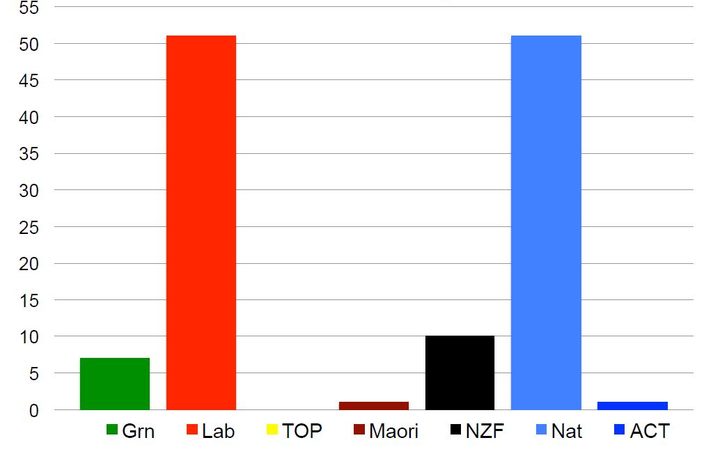 How the seats will be divided based on the latest poll data Photo: RNZ

Where might the four key players be in a week's time?

The chart shows National on a clear downward trend through the year, apart from a brief bounce after its election-year budget in May.

Labour was on a downtrend after the brief first Jacinda Ardern bounce when she became deputy leader in late February, until July. Since 1 August, when she took over as leader, Labour has been on a steep, continuous upward climb.

New Zealand First and the Greens have been trending down since July; in the Greens' case close to the 5% threshold which they must clear to stay in Parliament.

Whether these trends continue or reverse will be potentially critical to the election in two weeks.

The next full poll of polls update will be next Friday, 15 September. If there are polls between now and then, we will do a mini-update.

The poll of polls is an arithmetical average of the most recent major polls from: 1 News Colmar Brunton, Newshub Reid Research, Roy Morgan New Zealand plus the unpublished UMR Research (for the Labour Party) and, from September 2016 to July 2017 only, Curia (for the National Party). The polls are ordered according to the midpoint of their polling period.