Power Play - We now have a different image of the New Zealand election - courtesy of Bill English - of stardust being sprinkled over unsuspecting voters beguiled by the Labour leader Jacinda Ardern.

It was not a compliment however, more like an insult dipped in glitter. 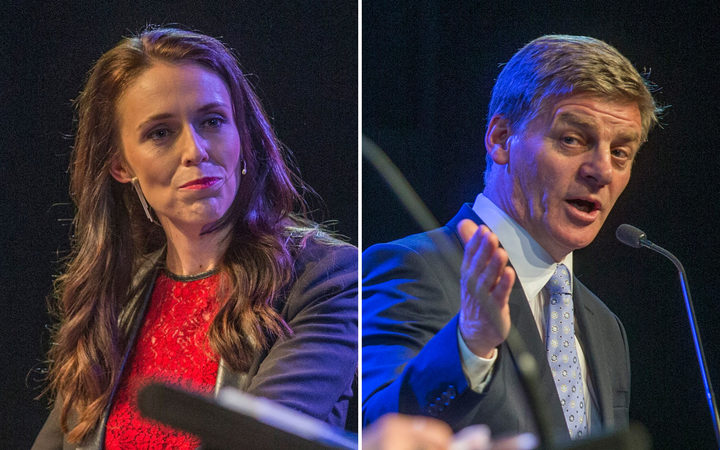 Jacinda Ardern and Bill English challenged each other in a more direct way than in previous debates. Photo: Fairfax Media

Mr English said he did not mean to be offensive but was just drawing attention to the sparkling but ultimately insubstantial leadership qualities of Ms Ardern; while initially glittering and new, the attraction will soon wear off.

Ms Ardern said she would rather be compared to stardust than to Donald Trump.

But there was nothing ethereal about the rest of last night's Stuff Leaders Debate; it was firmly focused on the Christchurch rebuild, the economy, tax, climate change and, once again, child poverty.

One exchange in particular crystallised the choice voters are being presented with this election.

"My generation is being sold down the river by your government," declared Ms Ardern.

"I know this generation - I've raised it," Mr English shot back.

Superannuation, home ownership, climate change, the state of rivers and lakes - they can all be seen through a prism of inter-generational conflict, and Ms Ardern is positioning herself with younger New Zealanders who will arguably suffer the consequences of the actions of the baby boomer generation.

The leaders challenged each other in a more direct way than in previous debates, and Mr English continued to drop warnings about Labour's tax plans - at one stage whipping out a 'list' of all of the possible taxes a Labour government might impose.

But have the attacks worked? Not according to polling, which has Labour slowly pulling away from National after a week of direct and deliberate assaults on Labour's economic policy from finance spokesperson Steven Joyce.

But Mr English denied that was attack politics, saying instead it was a fair strategy to robustly scrutinise an opponent's manifesto, with conclusions "most people" agreed with - that last part is a major stretch.

This week, however, Ms Ardern has not needed National to create confusion about Labour's tax plan.

Over the course of a few days she was asked about whether the land under the family home could be subject to a land tax, as proposed by other political parties.

Vague answers to those questions left open the possibility of such a tax under a Labour government, a possibility that carried great political risk.

Labour is still leaving a land tax on the table but Ms Ardern eventually clarified the party's intentions, saying there would be a exemption for any family home and the land underneath it.

The difficulty for Ms Ardern is that by deferring tax policy to a working group after the election, it makes it easier for National to raise the prospect of several different types of tax Labour could introduce.

And a new line from National during the debate: that voters would have to trust in a "committee" under a Labour government to set their taxes.

As the debates have proceeded the exchanges between the leaders have become more feisty, more direct and more challenging.

There is still one live televised debate to go between Ms Ardern and Mr English, just before election day, but with advance voting starting next week many voters will have already made up their minds.