Opinion - The binge watch continues. Once again the youthful contender, trailing stardust and adoring crowds wherever she goes, faces off against the man who makes such a virtue of his Kiwi common sense he might well be 80 percent strainer post. 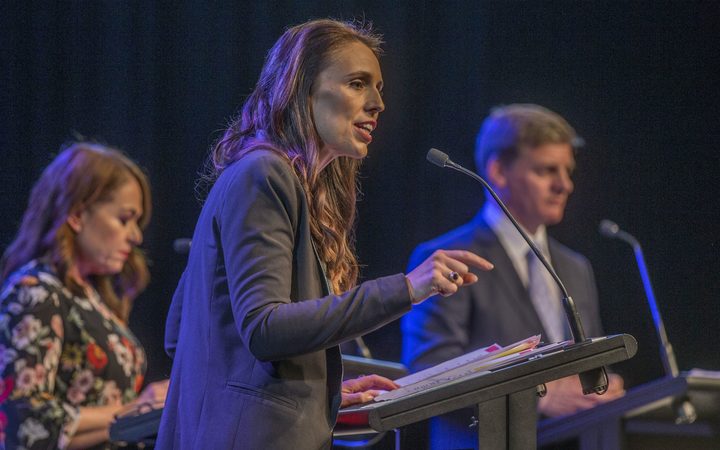 In episode three of the liveliest election show since Muldoon came to power we find Jacinda and Bill in a hall full of Cantabrians, who as any sports fan will tell you, like to clear their throats.

We are only seconds into Bill's opening address when the groans and scoffing begin. Television executives took years to perfect the worm and all it got us was Peter Dunne.

Your traditional town hall audience, that's your real barometer. Over an hour or so Bill and Jacinda ride the waves up and down. Disbelief is conveyed with perfect clarity.

Loud applause for Bill when he trades on his experience: "I know how to write a budget."

Loud applause for Jacinda when she lays bare the deficiencies of the government: nine years and still not started in any meaningful way on housing affordability, on child poverty, on water quality.

Both are growing more relaxed as the season rolls on. He, with his hand casually in his pocket, playing to the crowd, turning at last this time to face Jacinda. She, in repose, resting her elbow comfortably on the lectern.

Bill offers a roll call of ministerial talent to hooting laughter: Paula Bennett, Steven Joyce. Did he mention Nick Smith? Hard to hear over the jeering. And there is plenty of heckling of Jacinda, particularly as the pair debate the Christchurch recovery.

Steven Joyce's $11.7 billion hole is derided by Jacinda as a lie and the crowd roars approval, yet still the boss loyally defends him until he really can't and says he agrees with the number, which seems to mean he accepts it was wrong, but still goes right on to try to sell another bill of goods about it.

The state of our filthy waterways is there all night. Bill is quite sure we can have our cake and eat it too, you just have to scrape the cow pat off the top of it. Technology should fix it, she'll be right, meanwhile let's not stop building milking sheds.

This has been his recurring theme: what things mean practically speaking, 'what ya gunna actually do aboudit', 'ya can't shop with values'. Yet it is usually Jacinda who has the more specific plans.

Bill reminds us once again, and all night, of the genius of his social investment policy - they will fix people who live in a toxic family soup, one by one. And they will spend as much as it takes.

It's admirable, but he seems to be suggesting this will fix most child poverty when in fact this may be a fix for some thousands - and yet there are actually some hundreds of thousands living in poverty.

Jacinda pursues him: 'now we're talking about the working poor'. She says that's different: 'families where there is not dysfunction but not enough money to turn on the heater in winter. What's his answer for them?' The question goes unanswered by the prime minister.

He proudly declares the Cathedral a top priority and the groans tell us the worm is not with him. Jacinda promises to deal with mental health, and is hugely applauded.

The room and the nation are not at one, but the applause, when it is loudest, is for the young pretender and her vows to make room for everybody.

David Slack is an author, columnist and speechwriter. He was speechwriter for prime ministers Geoffrey Palmer and Jim Bolger.