Green Party co-leader Metiria Turei says she will not be resigning, but is ruling herself out of ministerial positions if Labour and the Greens win this year's election.

Mrs Turei revealed last month she lied to Work and Income about flatmates as a young solo mother in the early 1990s so her benefit would not be reduced.

The Ministry of Social Development is now investigating her record with it.

She said yesterday she had also enrolled to vote at an address where she was not living, in 1993, saying she did it to vote for a friend who was running as a candidate.

Mrs Turei told reporters she had opened herself to intense scrutiny because she wanted people to know what it was like to live as a beneficiary, and to fix New Zealand's welfare system.

"I will continue to stand up for New Zealanders who are poor and are treated with discrimination."

She said she considered resigning but was doing important work, and had received a "huge number" of emails and messages in the last 24 hours asking her not to go.

However, she knew she had put Labour - as her party's potential coalition partner - in a difficult position, which is why she was offering to step aside from any ministerial roles if the Greens formed part of the next government.

Mrs Turei said she made some foolish decisions as a young person.

"I accept that people want me to be held accountable for my past actions, and I need to show some respect for that, giving up my intention to be Minister for Social Development is a price that I'm paying for that, but I also know that people are asking me not to resign."

Mrs Turei confirmed her baby's father was a flatmate prior to her becoming pregnant, but not afterwards.

She said, until now, she genuinely hadn't remembered registering for an electorate she didn't live in. It was "foolish" to have done so, she said.

She also reiterated that her mother, who was also a flatmate at one point, was "not financially responsible" for her at that time.

Greens' relationship with Labour 'as strong as ever'

Her co-leader, James Shaw, said the party's relationship with Labour was "as strong as ever".

Lots of people moved around without updating their electoral roll details, he said.

Mrs Turei confirmed she had her party's backing in her decision not to stand down or resign, and said the Greens told Labour about her plans ahead of today's announcement.

The Greens had tried everything over the last 15 years to change the welfare system, including bills and debates, and nothing had worked. Her story was the "last tool" she had, she said. "I don't regret telling my story."

Asked if she could be trusted, Mrs Turei replied: "New Zealanders can trust me to speak on behalf of those who cannot speak for themselves." 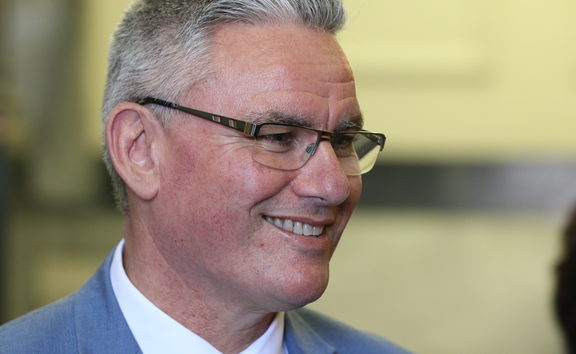 Mr Davis told TV3's The AM Show that Labour would need to have a discussion about Mrs Turei, as the party did not want to be seen condoning her actions.

"It's turned to mushy peas for her hasn't it. It's pretty ugly, and I just think if you're going to open up about yourself like that you've got to tell the whole truth and nothing but the truth and don't leave little bits out."

ACT leader David Seymour said Mrs Turei should have resigned as an MP and it was a "cop out" not to do so and Labour should force the issue.

"Jacinda Ardern has a chance to prove herself as a new leader. She should make Metiria Turei's resignation a condition of the Greens' participation in a Labour-led government."

National hits out at Labour and Greens

The National Party has hit out at both Labour and the Greens, saying this week's events have proven the left is a bit of a circus.

"The whole left thing's looking a bit like a circus this week, we've had one leader go, we've had another leader stay but the leader isn't fit to be a Cabinet minister but she's still the leader, I think the public will be looking at all of that and going well this is all a bit confusing and these people want to be considered to run the country in six or seven weeks time."