Three leading mayoral candidates have backed the idea of dedicated seats for Māori on the Auckland Council, but one of them, Phil Goff, would leave it to the government to decide. 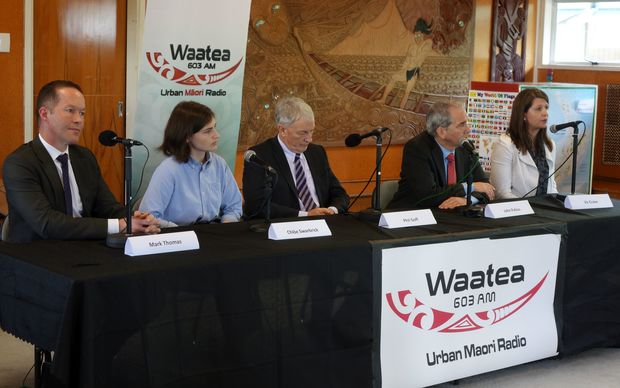 Mr Goff - along with John Palino and Chloe Swarbrick - said he would support Māori seats but, in today's Radio Waatea debate, both Mark Thomas and Vic Crone opposed them.

Mr Goff was asked directly whether he would support dedicated Māori seats.

"I'd say 'yes', John Key says 'no', so it's not going to happen," he told a live audience gathered at a marae in Mangere.

But Mr Goff was challenged by Mr Thomas, who correctly pointed out that the next mayor could trigger a process to bring in the seats.

"Phil has an option. If he's mayor, he can ask Aucklanders if they want that, that exists under existing legislation," Mr Thomas said.

"So would you do that, Phil, would you run a ballot?"

Mr Goff disagreed. "No, the decision that's been made on whether we had elected Māori wards is one by government, you know that, and John Key has said 'no' and Rodney Hide said 'no'."

While the legislation which created the council in 2010 ruled out any changes for six years, the council is free to review the issue in the next term after October's election.

After the debate, a spokesperson for Mr Goff said, while he would support seats as mayor, he would not seek to carry out the formal poll of residents that would be needed to make the change. That would be an expense that he did not consider a priority.

Mr Goff's position would be that should the government wish to pursue dedicated Māori seats on the council, he would work with them.

Mr Palino's unequivocal "yes" to Māori seats during the debate was a step further than his published manifesto, which called only for a review of Māori representation and described the appointing of members of the Independent Māori Statutory Board to council committees as undemocratic.

Ms Crone opposed Māori seats, saying quotas did not work, and Mr Thomas said the answer was to work more closely with Māori.