Finance Minister Bill English is disputing an OECD report which says the growing gap between rich and poor in New Zealand is leading to lower overall economic growth. 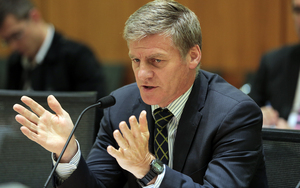 Bill English says in a poorly growing economy, everyone was worse off. Photo: RNZ

The Organisation for Economic Co-operation and Development (OECD) report says the countries with the biggest increases in income gaps are New Zealand, Finland, Israel, Sweden and the United States.

The OECD said governments wanting to boost their economies should boost taxes on high income earners and do more to help the bottom 40 percent of earners.

But Bill English told Morning Report today that was not the answer and half of all New Zealand households paid no net tax at all.

"In an economy that's not growing - as New Zealand grew poorly for quite a stretch up until about the early 1990s - in an economy growing poorly everyone gets worse off and the people at the bottom are affected the most."

"And what this report is showing is actually that if we want to see economic growth we've got to get a fairer tax system and we've have to reduce inequality."

Labour believed higher earners and those with substantial assets should pay more, he said, and the party was taking another look at how a capital gains tax might work.

New Zealand is not alone among OECD countries in income inequality, the report shows.

The gap between rich and poor is at its highest level in most OECD nations in 30 years, it says, and that "today, the richest 10 percent of the population in the OECD area earn 9.5 times more than the poorest 10 percent - by contrast, in the 1980s, the ratio stood at 7:1."

The OECD argues anti-poverty programmes are not enough, and more access is needed to high-quality education, training and healthcare.

Council of Trade Unions economist Bill Rosenberg said policymakers should be aware of far more of the population than the bottom 10 percent and those considered to be in poverty.

"I suggest that in New Zealand, it's probably more like 50 percent or more. So the bottom half of the population is affected by these things, and it's the effect on them that the OECD says directly affects growth."

He said New Zealand may have lost far more than the OECD estimates.

"The growth per person between 1990 and 2010 in New Zealand would have been almost 15 percent higher, and taken it to near the top of the OECD, if we hadn't had the huge increases in inequality over the period of about the mid-1980s to the 2000s."

The Salvation Army, meanwhile, is calling on the Government to fix the gap between high and low decile schools to deal with the rising inequality identified in the report.

"One of things that we have to do as a country is make certain that those gaps don't persist and certainly one way to do that is to make certain that we don't underfund those schools on the basis of them being judged to be poorly performing."