An investigation into the Panama Papers - an unprecedented leak of 11.5 million files from the database of the world's fourth largest offshore law firm, Mossack Fonseca - by RNZ, One News and investigative journalist Nicky Hager has lifted the lid on how New Zealand is part of a tangled web of secretive shelf companies and obscure trusts. It has also raised questions over the country's foreign tax rules, including its disclosure requirements.

Now, an email sent by Mossack Fonseca New Zealand's Daniel Leon has revealed - in his own words - the measures clients can take if they do not want their names to appear on the public paperwork.

The email was in response to an enquiry on behalf of Juan Fernandez Methol from Studio Damiani, a Uruguayan firm offering legal and accountancy services to provide inheritance and tax "financial solutions".

In the 2014 email, Mr Leon responded to a query from one of his colleagues, a Mossack Fonseca lawyer in Panama, about how the company used New Zealand look-through companies (LTCs) and foreign trusts.

Mr Leon noted in his email if the client did not "wish to appear as a registered shareholder", Mossack Fonseca could "offer the constitution of a foreign Trust NZ to be the holder of the shares of the LTC". 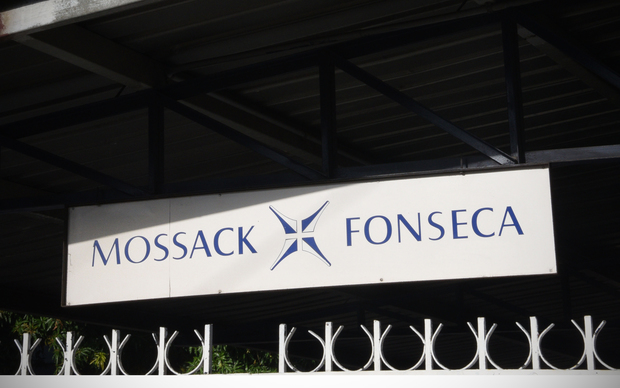 He went on to say that, provided the trustee was not an Australian resident (because New Zealand and Australia have automatic disclosure), there were "minimum requirements for disclosure of foreign trusts in New Zealand".

Mossack Fonseca would set up an LTC for $US2850, which would also include the provision of a "registered office" and a "NZ resident director" - often these would be New Zealand-based lawyers, and the addresses would be those of their law offices.

A foreign trust cost $US2800 to set up through Mossack Fonseca New Zealand. For customers interested in a "combo", ie an LTC and a trust, the cost of the trust would be reduced to $US1500.

Meanwhile, one of the Auckland-based law firms that features prominently in the Panama Papers, Cone Marshall, has removed a significant amount of information from its website about the work it does in the foreign trust industry.

The Panama Papers reveal the family of an exiled Kazakhstan prime minister convicted of corruption is using the New Zealand law firm to help them hide the ownership of their $15 million London home.

One section that no longer appears on the firm's website referred to New Zealand as having "minimal reporting requirements as to foreign settlor trusts".

It went on to say: "The identity of the settlor need not be disclosed and the trust deed is not registered with any tax or government authority.

"All that is required is that the trustee notifies the formation of a trust, by reference to its name and date of formation, together with the identity of the trustee.

"If the trustee is a qualifying trustee (that is a trustee which has a professional person as trustee or manager), it will never be subject to tax in New Zealand on its overseas income.

"There is no obligation to file any trust accounts with any person or institution or to have such accounts audited. The trust deed, details of beneficiaries and records of directly held trust assets must also be held in New Zealand." 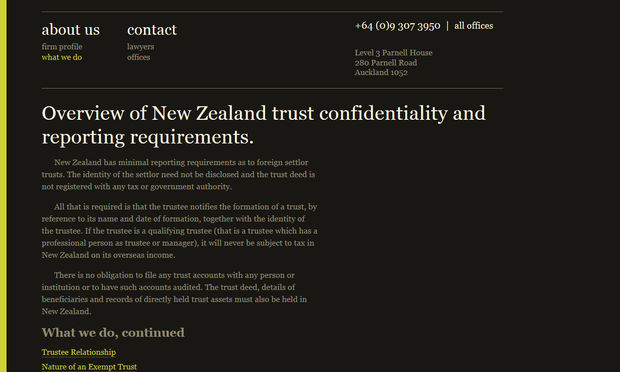 An archived version of one of the sections about foreign trusts on Cone Marshall's website. Photo: https://archive.org/web/

Another section no longer available was titled "Nature of a New Zealand exempt trust".

That page had made a reference to there being "no requirement for registration of a trust; the deed remains an entirely private document".

A third section that no longer appears on the website was titled "Overview of wealth planning structures under New Zealand law".

It previously had the following information:

"The taxation of foreign settlor trusts with New Zealand trustees is codified in its taxation of trusts regime, and its trusts legislation."

Now, that section on the firm's website is blank.

It is not clear exactly when this material was removed from Cone Marshall's website, but it occurred sometime since May 2010.