Analysis - For Hurricanes fans, Super Rugby Trans Tasman went from being the best competition format ever to the worst in the space of 80 minutes on Saturday night. 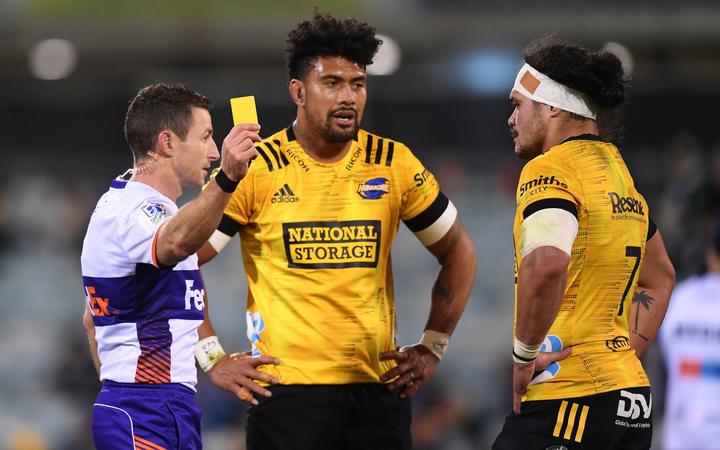 Du'Plessis Kirifi of the Hurricanes receives the yellow card during the Round 4 Trans-Tasman Super Rugby match between the ACT Brumbies and the Wellington Hurricanes at GIO Stadium in Canberra, on 5 June 2021. Photo: Photosport NZ

A win over the Brumbies could have propelled them into the unlikely position of hosting the final in a fortnight's time, but in a scene that brought back horrible memories of Super Rugby's heyday a couple of decades ago, the Canes blew it in underwhelming fashion.

A lack of accuracy, both in the metaphorical sense across the park and the literal one regarding the usually reliable Jordie Barrett's boot, is what doomed yet another campaign.

It came at Canberra Stadium, where the team containing Barrett's father Kevin butchered their first real chance at winning a title back in 1997.

Back then it was admittedly a much taller order against a team stacked with Wallabies that would win the World Cup a couple of years later, but sadly that experience of watching golden opportunities evaporate is what it has meant to be a Canes fan.

Even the one title win in 2016, was achieved with the entire deck stacked in their favour: a Lions team that had to fly halfway around the world, playing on a Wellington night so cold and inhospitable it should have been classified as a health hazard for the 35,000 that turned up to watch it.

It's likely that Sky Stadium will be expecting about a tenth of that number to come through the turnstiles for the Canes' now meaningless game against the Reds next Friday night.

At least they'll have a fixture to play at home before the season ends though, unlike the Chiefs, who had this weekend's game against the Rebels moved to Sydney because of the Victorian lockdown situation.

Throw in their first Super Rugby Aotearoa game having to be played behind closed doors and that's two fewer gate takings that the already small-market Chiefs have been dudded out of.

Tiny margins had an effect on one of the other NZ sides over the weekend, too.

The Crusaders were odds-on favourites to crush the Force, but the plucky band of all-comers that make up the Western Australian team proved harder to dispatch than first thought.

Will Jordan had looked to put them away when he scored his third try, but then saw it rubbed out after replays revealed that the Force's Jake Strachan had put a foot in touch before throwing a shocking pass that saw Jordan swoop and score.

The irony of the try being overturned because of a mistake by the opposition was a bit odd but has now become deadly serious for the Crusaders as it now means they have pretty much given up their hopes of a home final, or even a decent chance of even making it since the Highlanders and Blues now control their own destiny heading into next weekend.

It would make sense for the final to be between the Blues and Crusaders at Eden Park, though. That was the match we got robbed of last season when lockdown wiped out the last weekend of Super Rugby Aotearoa, then again in pre-season.

You don't need to spend too much time around the Blues' training base at Alexandra Park to know that there is some serious beef from the two times they did meet this season - first a showboat-fest at Eden Park and then the Blues getting ground into submission in Christchurch.

This is a title the Blues desperately need.

Super Rugby Trans Tasman has revitalised their fortunes and the form of a few players who really needed that boost with All Black selection just around the corner, and a bit of silverware in their long-empty (yes, I know they won the Brisbane Tens but that hardly counts) trophy cabinet would set them up nicely for when Beauden Barrett and Roger Tuivasa-Sheck join them in 2022.