Opinion - Well done to the Queensland Reds who became the first Australian team to defeat a New Zealand opponent in Super Rugby Trans-Tasman. Sure, they needed a one-man advantage for a decent chunk of the game to do it, but the match against the Chiefs in Townsville ended up being a wild ride. 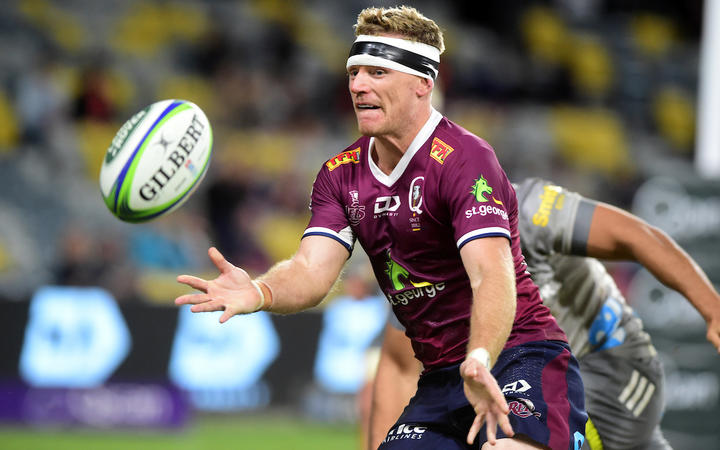 The Reds' Bryce Hegarty during the Trans-Tasman Super Rugby match against the Chiefs in Townsville 29 May. Photo: Photosport

It was probably the highlight of the weekend, unless you're a Chiefs fan, in what has become a really odd competition. The final of Super Rugby Trans-Tasman will now definitely not be that, since none of the Australian teams are able to qualify, so it's down to the Blues, Hurricanes, Crusaders and Highlanders to rack up as many bonus points as they can in the last fortnight of matches.

Just a few weeks ago, the Blues and Canes looked like a couple of broken down wrecks. Now, thanks to an extremely friendly schedule, both are on course to be the two teams to be fighting it out for the title.

Credit where credit it's due, though. The Canes' defence has improved out of sight since their first game against the Waratahs that saw 112 points scored, and that points differential may well be crucial. The Blues have clicked into gear and are scoring some of the best tries in the competition, but crucially look like they have plenty of room to get better as well.

This sets up a crucial couple of games for those two sides next weekend. The Blues head to Brisbane to take on the Reds in rugby's most boringly named fixture, while the Canes go to Canberra for the battle of the capitals. Meanwhile, the Crusaders will be rueing their inability to pick up a bonus point in their first game, because that's all it might take for them to watch their first final in five years instead of playing in it. So, the first question is: does this make Super Rugby Trans-Tasman a legitimate title?

It's highly unlikely anyone in the Blues or Hurricanes will say it isn't, especially not coaches Leon MacDonald and Jason Holland. This quirk of the draw that could shut the Crusaders out would be a godsend for them and their careers, though. Of course, if the Super Rugby Aotearoa champions don't make it then it's highly likely the Crusaders will simply shrug their shoulders and blame the odd way in which the competition was thrown together.

Then the much bigger question is: what is going to happen next season? While the Trans-Tasman competition has been a fun little throwback to the way Super Rugby used to be, it hasn't exactly caught the imagination of the public.

Yes, the Highlanders v Rebels game was moved to Leichhardt Oval in Sydney at the last minute due to the lockdown in Victoria, but it was still quite stark seeing a game with that much talent getting played in front of a club rugby sized crowd in a postage stamp sized ground.

The Blues v Brumbies game at Eden Park became the second rugby game in a week to have their crowd dwarfed by a Wellington Phoenix fixture the next day, and now the Chiefs' campaign is all but over, it's unlikely their next home game against the lowly Rebels will require an awful lot of tickets to be printed.

But this is apparently what Super Rugby is supposed to go back to being next year, alongside talk of expansion to Japan (which is unbelievable really, given that's already been tried and didn't exactly go that well). It's pretty unlikely that Moana Pasifika and the Fijian Drua will be at a level to seriously challenge the NZ sides within the next 12 months, especially Moana Pasifika as they haven't even signed any players or a coach yet.

When it comes down to it, just what Super Rugby will look like in 2022 is something that needs to be sorted out pretty fast. The pre-Covid-19 landscape was blighted by poor strategy, so some sort of idea of where this competition is headed now would be better than simply expecting people to show up and get emotionally invested in it. Because right now, it's not that easy.