Opinion -The road to the Super Rugby Aotearoa title will run through Christchurch ... again.

The die was cast thanks to the Crusaders' very convincing win over the Blues yesterday, proving that recent reports of the defending champions' demise are premature. 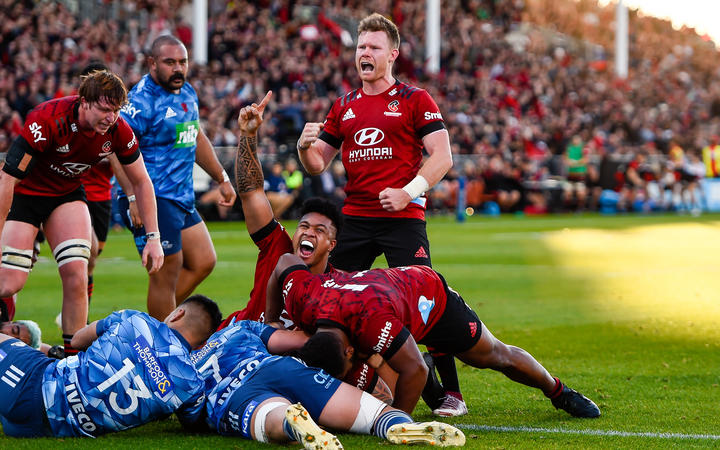 But really, there was an unflinching inevitability to the way the Blues were systematically dismembered: the absorption of a desperate yet impotent attack, the lethal strikes whenever the Crusaders had the ball, and the unwaveringly friendly refereeing decisions in their favour.

It means that the horribly out of form Blues, who have lost their last four games in a row, now trudge back to Eden Park next Saturday knowing that the very much in form and fired-up Chiefs are already in the final.

A loss would consign the Blues' 2021 season to the dustbin, which will raise some serious questions about just how it got that way given the talent acquisition and hype. But they can have at least one serious complaint about how the result went down in Christchurch.

Blues midfielder Tanielu Tele'a's return from a lengthy injury break lasted all of 10 minutes, thanks to a big tackle from Sione Havili-Talitui.

Problem was, Tele'a didn't have the ball. The next problem was some sort of miscommunication that led the match day doctor to think Tele'a had suffered a head knock when he was only winded. All of a sudden Tele'a was sitting down on the sideline, out of the game for good.

There's probably going to be more to come on this weird turn of events, to say nothing of the fact that Havili-Talitui didn't even get a yellow card.

Codie Taylor can count himself lucky as well, pinged for three penalties and allowed to play out the game unhindered.

Would it have changed the result? Probably not.

The Crusaders approached this game like a test match and while much of it wasn't the best to watch, it seemed clear that they'd taken recent losses to the Highlanders and Chiefs very personally and were determined to make the Blues pay. But it again highlights another big inconsistency with officiating, while player safety is supposed to be at the forefront of their decision-making, this absurd turn of events shows that like the recent rule changes, a lot of this stuff seems to be getting made up as it goes along.

One thing that is consistent, however, is the form of Richie Mo'unga.

He is quite clearly the most influential player in the game right now and looks certain to retain his first-five spot when the All Blacks start playing again.

This means Beauden Barrett will have to return from his jaunt in Japan and potentially adjust to life on the bench, as the fullback spot will be a battle between his brother Jordie and the now nerveless Damian McKenzie.

DMac has now won four games in a row for the Chiefs on the last play, which is probably some sort of record but more importantly, shows that he's the guy you want on the field when any big game goes down to the wire.

The Chiefs' win over the Hurricanes on Friday night showed that winning is very much now a habit for them. They do it their own way, happy to work their way up the field and kick penalty goals however necessary.

Next weekend won't just be a big day for them, though.

Eden Park will host a doubleheader with the historic first-ever women's Super Rugby match between the Blues and Chiefs women's sides being played beforehand.

While it is shaping up as a memorable occasion, the media releases put out for both teams had a stark reminder about just how far the women's game has to go to gain parity.

While the men's sides have their interview opportunities at the usual training times during the day, the women have to be reached at 7pm in the evening - because they all still have to go to their day jobs.

NZ Rugby boss Mark Robinson has already said that a women's Super Rugby competition is dependent on the controversial Silver Lake deal going through, so time will tell whether next Saturday's game will be the start of something big or just a brief, feel-good photo opportunity.