Damian McKenzie has nailed a last-minute penalty to earn the Chiefs a 26-24 Super Rugby Aotearoa win over the Hurricanes in Hamilton on Friday night. 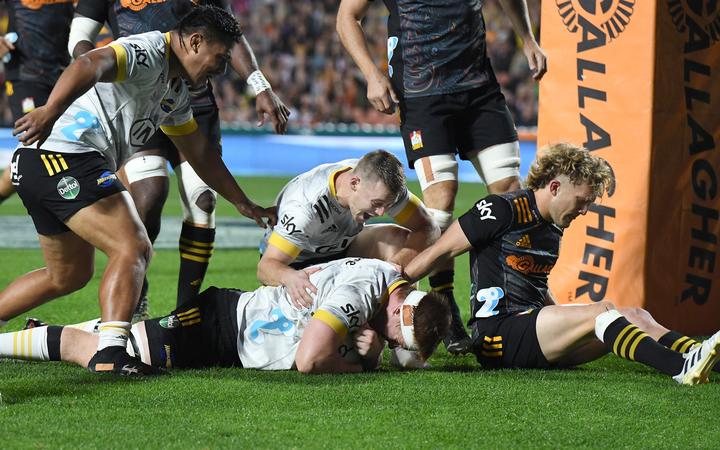 The Hurricanes outscored the home team three tries to two, but the ever-reliable boot of McKenzie once again saw the Chiefs over the line.

He landed four penalties and two conversions for a 16-point tally, enough for the Chiefs to win their fifth game on end and back up their upset 26-25 win over the Crusaders last week.

However, it took less than a minute for the Hurricanes to stamp their mark on the game - Tyrel Lomax tipping the pass on to lock James Blackwell who stormed over from 30 metres out.

Jordie Barrett's conversion gave the Hurricanes an early 7-0 lead, but McKenzie nailed a 15th minute penalty from 40 metres out to narrow the gap.

It took another 15 minutes of hard grind before the Chiefs could add to their tally, the try to No 8 Pita Gus Sowakula coming after a big shove from an attacking scrum.

McKenzie added the extras to give the Chiefs a 10-7 lead, but Barrett slotted a monster 58 metre penalty right on half-time to level the scores at 10-10 going into the break.

The deadlock lasted only three minutes after the restart, broken by another McKenzie penalty then extended five minutes later when Chiefs skipper and halfback Brad Weber slipped the pass to a flying Bryn Gatland for the try.

Ahead 20-10 after McKenzie converted, the Chiefs could only hold that lead for a couple of minutes. Hurricanes No 8 Devan Flanders made the initial break-through, and Billy Proctor finished in style to reduce the Chiefs' lead to just three.

Another McKenzie penalty eased the pressure as the hour mark ticked over, but the Hurricanes grabbed the lead back with 10 minutes remaining when replacement hooker Asafo Aumua powered over from a lineout drive.

Barrett's conversion gave the visitors a 24-23 lead, and they looked on track for just their second win of the season until McKenzie slotted the final crucial penalty.