First Person - What's it like being a commoner at a royal event? Steph Coutts reports back from Harry and Meghan's reception in Wellington. 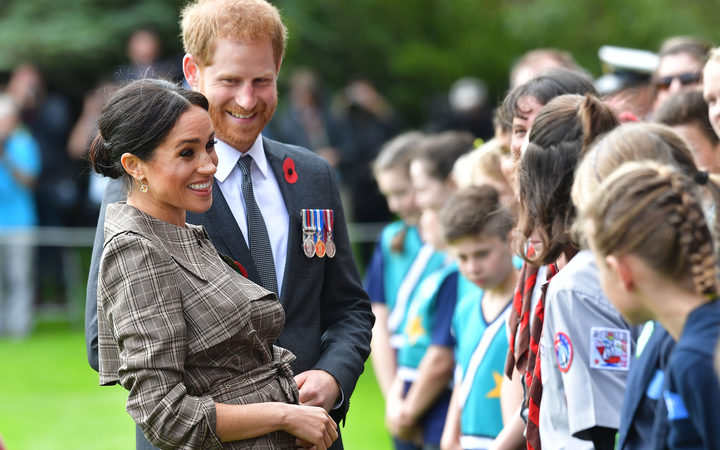 The evacuation was surprisingly laid back. People wandered out with their drinks. The fire brigade turned up. We all stood around outside having a chuckle that the chef had accidentally burnt some toast.

The fire alarm went off just minutes before their Royal Highness, the Duke and Duchess of Sussex, were due to join the "Women's Words" reception. It made a change from standing in a semi-circle, waiting to shake hands.

It seems a vegetable steamer in the kitchen set the alarm off - I'm glad it wasn't a security event - that would seem very un-New Zealand-like. Although many of us are not huge monarchists, we're not usually the type to call in a bomb scare at these types of events.

I was invited to the reception at Government House as a result of volunteering at Kaibosh Food Rescue, a Wellington organisation that has been rescuing food that is too good to waste for 10 years. Over that time, over a million kilograms of food has been saved from landfill and almost three million meals have been made for those in need. The work Kaibosh does is amazing, but I only make a small contribution to the charity.

The one thing that stood out was the number of amazing women that work in their communities, and how few of them I knew on sight.

Sure, there were some famous people I recognised - I ate a kawakawa chocolate from Monique Fiso. But, I also met a lots of new women Members of Parliament (there were a lot of MPs floating around), Jackie from The Aunties (who is an inspiration for her honesty and pure dedication), and a number of young women and men who are doing amazing things for our community who should be more famous than they are.

We need to celebrate our amazing women more often. Not just when the Royals stop by.

Hopefully all the politicians (the new and the more experienced) and the amazing young people were inspired by the "women's words".

The Governor-General reflected on how women's' emancipation had stalled in recent years and that there was still work to do to address the gender pay gap and New Zealand's appalling rate of domestic violence. That's only too true.

The Duchess' greeting in Te Reo was brave - a reminder that all of us should make more effort to learn our national language and use it where we can. She spoke of how feminism was really about fairness. That's something that a whole lot of people need to be reminded of more regularly.

The stand out speech was actually a poem by New Zealand's poet laureate Selina Tusitala Marsh. She started with a warm Māori and Pacific welcome that reached across the Pacific.

She reminded us that women are leaders in everything they do. Her theme of leadership, and kindness, and love was echoed in the song from

Tiresa Foma'i, Rosetta Lopa and Anastasia Sirila - the young schoolgirls who showed the country how to sing the national anthem when the Aussies stuffed it up.

Given the fire alarm - and perhaps their security and schedule - there wasn't a lot of time left at the end of the event for mingling with the royals. Some people had been chosen for a guaranteed hand-shake and hello.

I wasn't one of them, and despite the delays, the event finished right on time without me seeing much more than the back of Harry's head and Meghan during her speech.

It didn't bother me much. I was there for interest's sake, to hear what people had to say, see what they were wearing and the canapes. I can report - they were delicious.

* Stephanie Coutts is a public policy consultant and the longest serving female volunteer for Kaibosh.