The Duke and Duchess of Sussex have received a rapturous welcome to New Zealand for their four day tour. 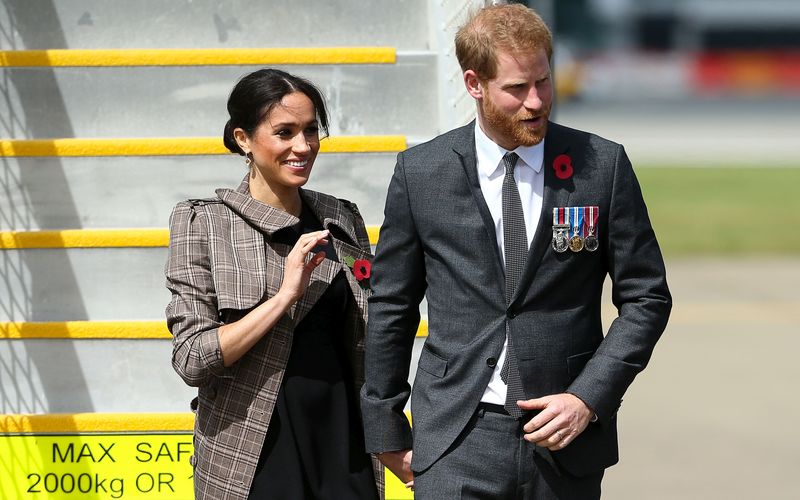 The Duke and Duchess of Sussex arriving in Wellington. Photo: Pool / Getty 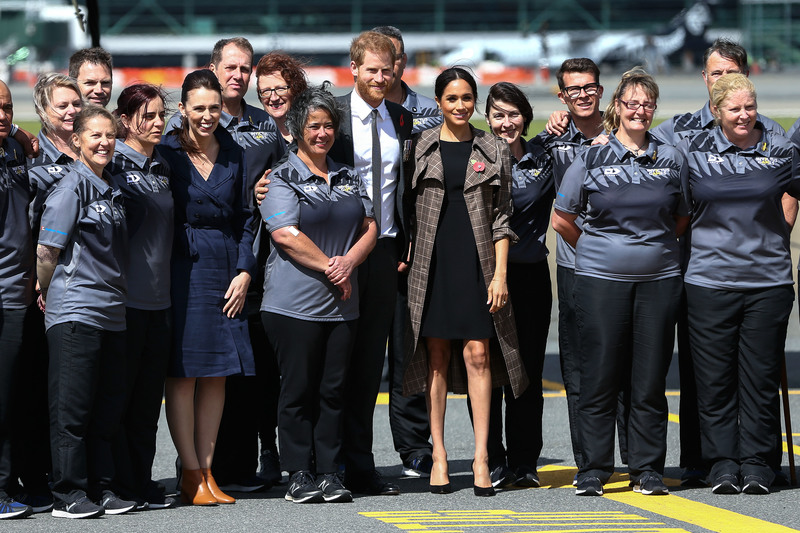 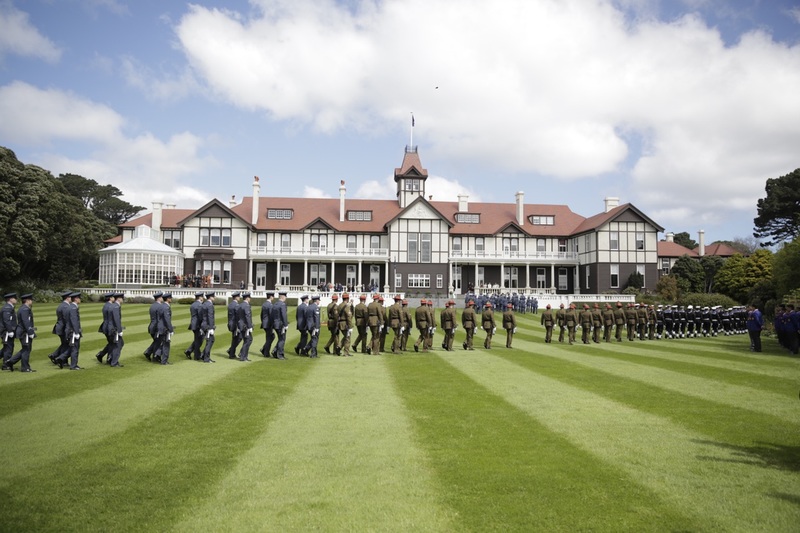 Preparations to welcome the Duke and Duchess of Sussex to Government House in Wellington. Photo: Rebekah Parsons-King 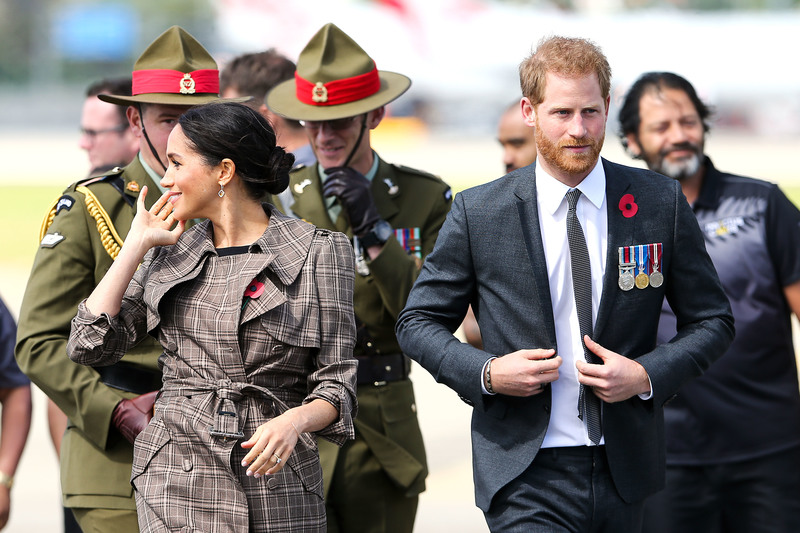 The Duke and Duchess of Sussex arrive in Wellington. Photo: Pool / Getty 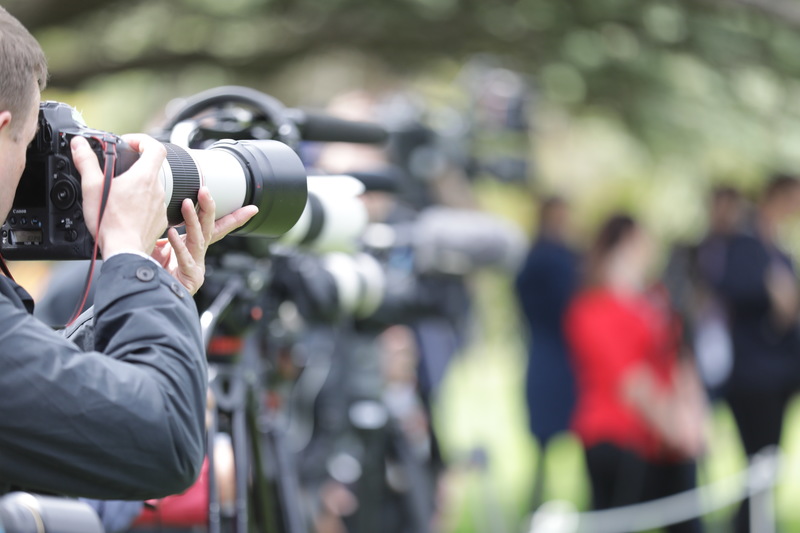 The media at Government House getting ready for the perfect picture. Photo: Rebekah Parsons-King 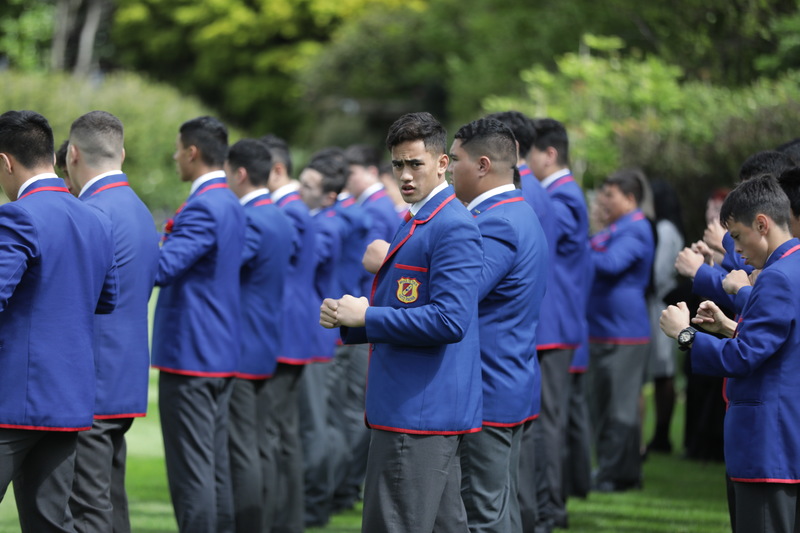 Maranatha Christian School in red and Girl Guides in blue waiting for the arrival of Duke and Duchess of Sussex at Government House. Photo: Rebekah Parsons-King 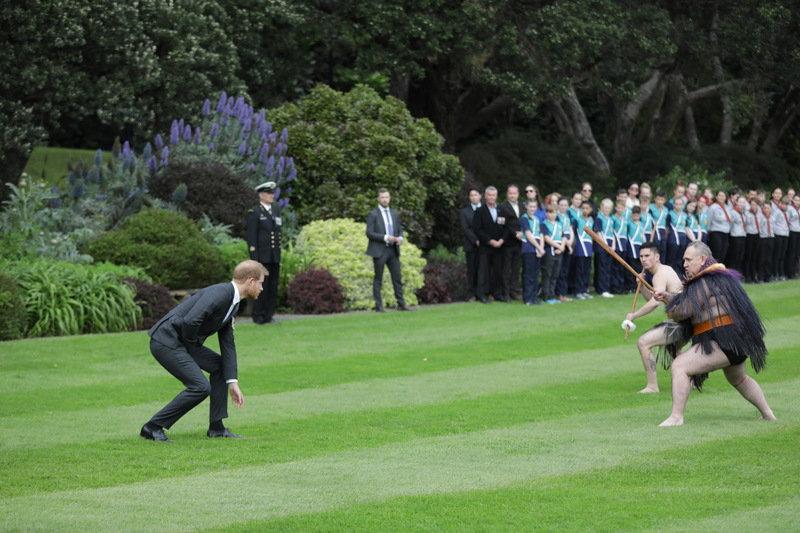 The Duke of Sussex being welcomed at Government House. Photo: Rebekah Parsons-King 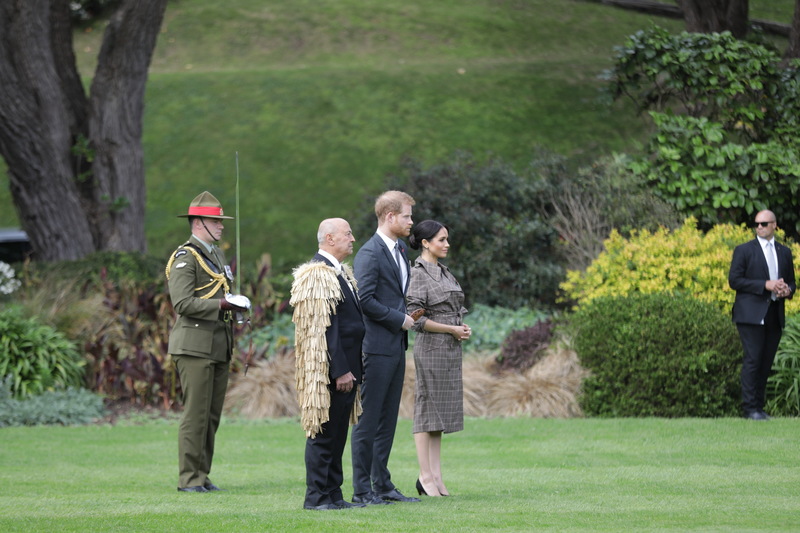 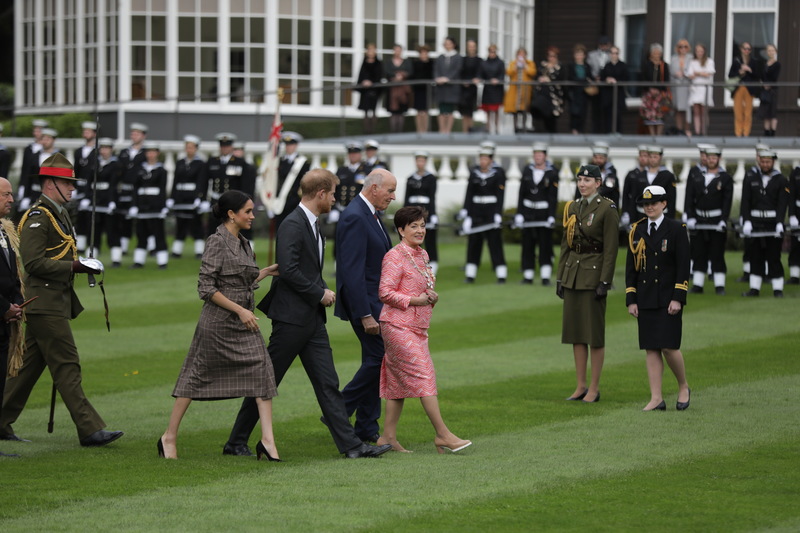 The Duke and Duchess of Sussex with Dame Patsy Reddy and David Gascoigne. Photo: Rebekah Parsons-King 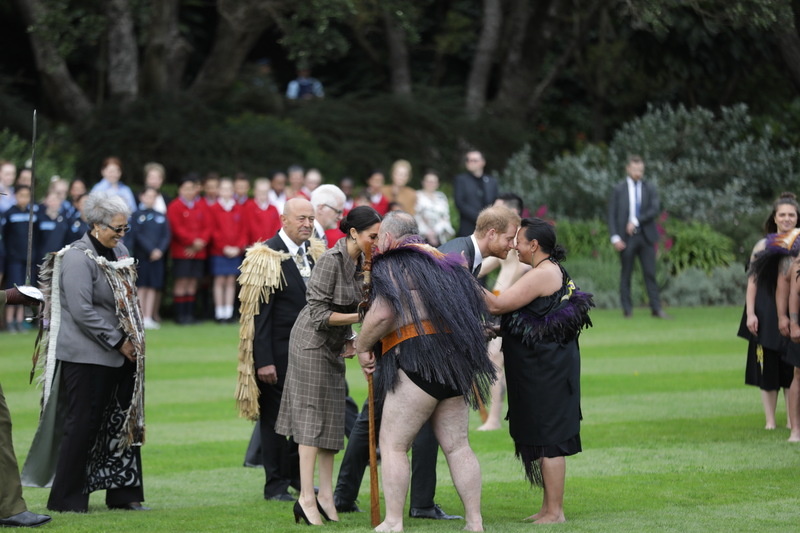 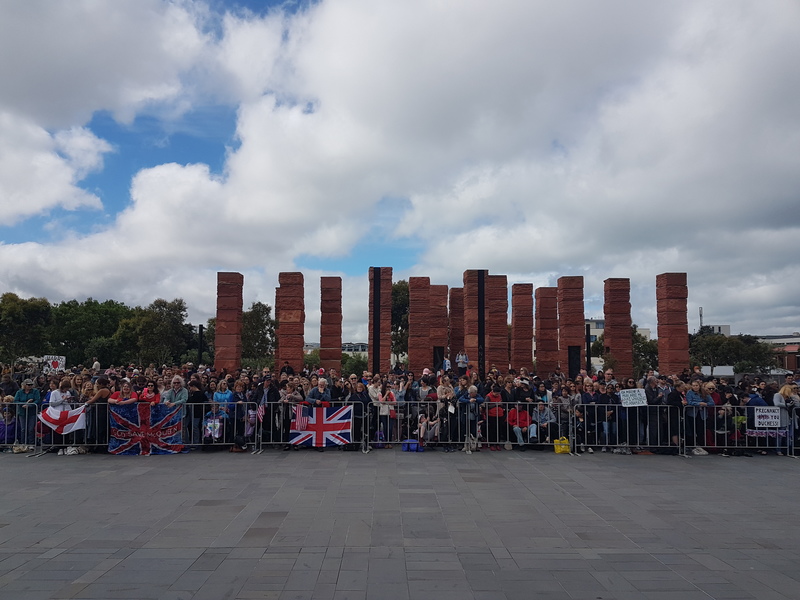 More than 2000 people waited for the couple at the national war memorial. Photo: Katie Doyle 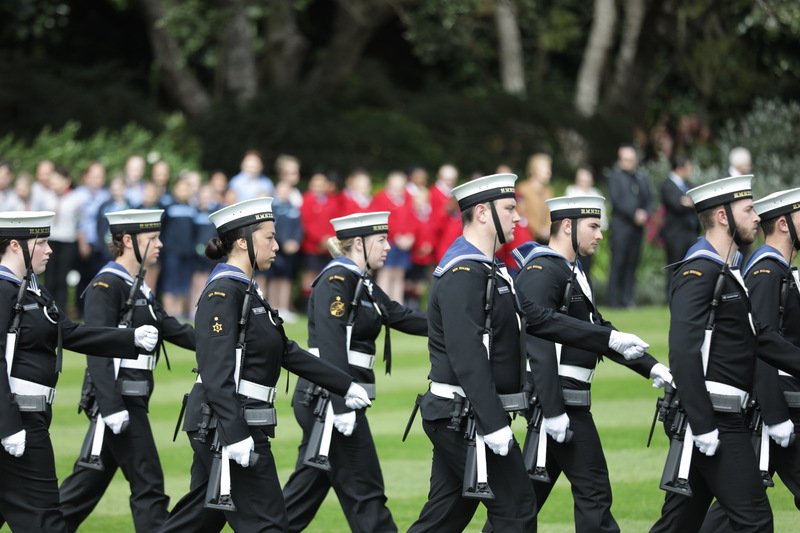 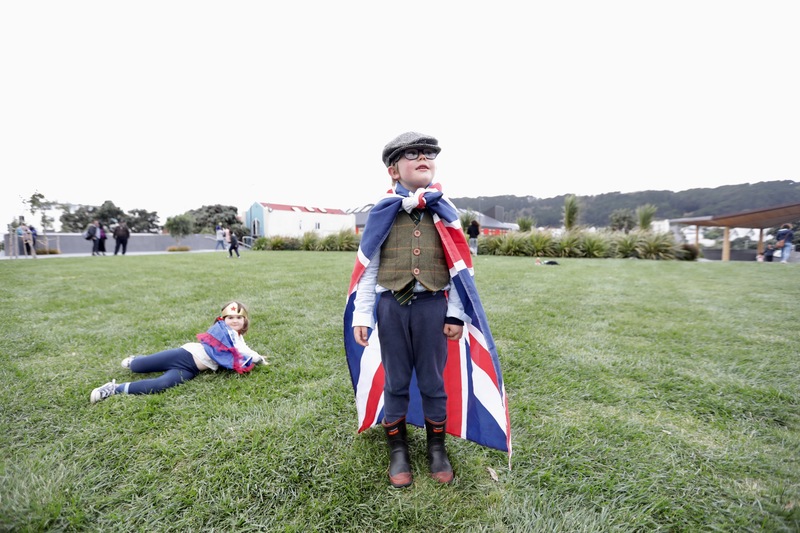 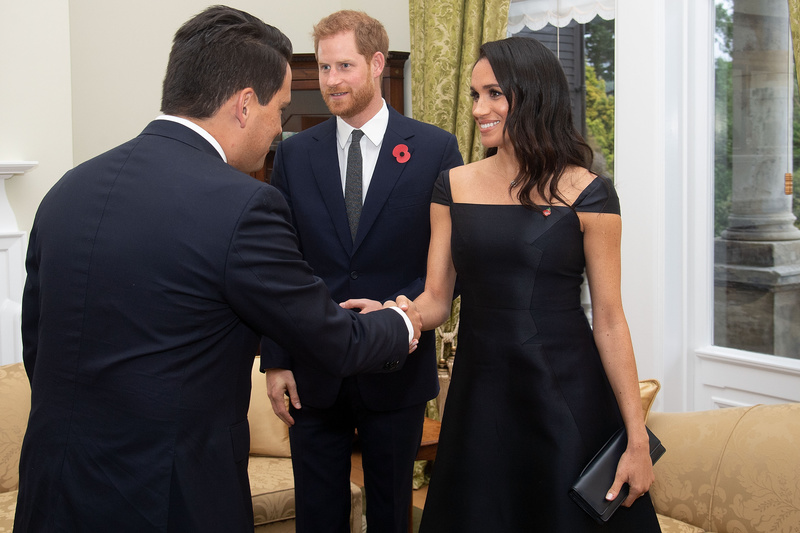 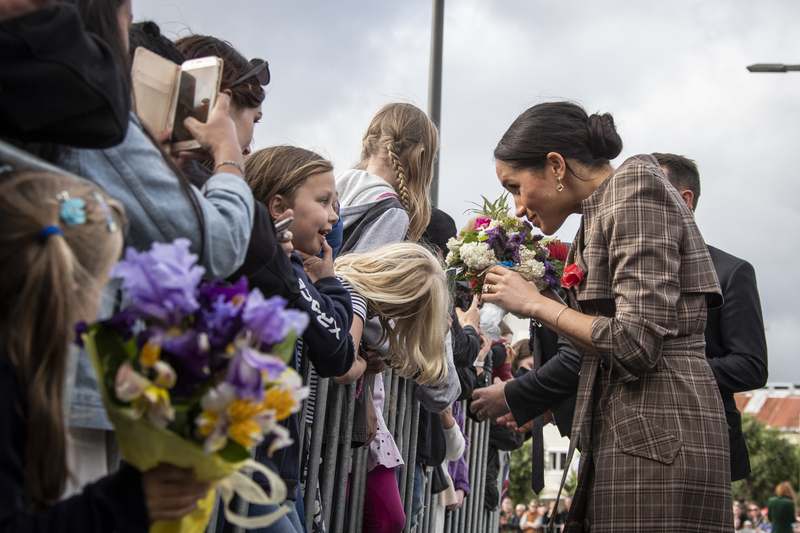 The Duchess of Sussex meets crowds at the walk-about at the Pukeahu National War Memorial Park. Photo: Pool / Getty 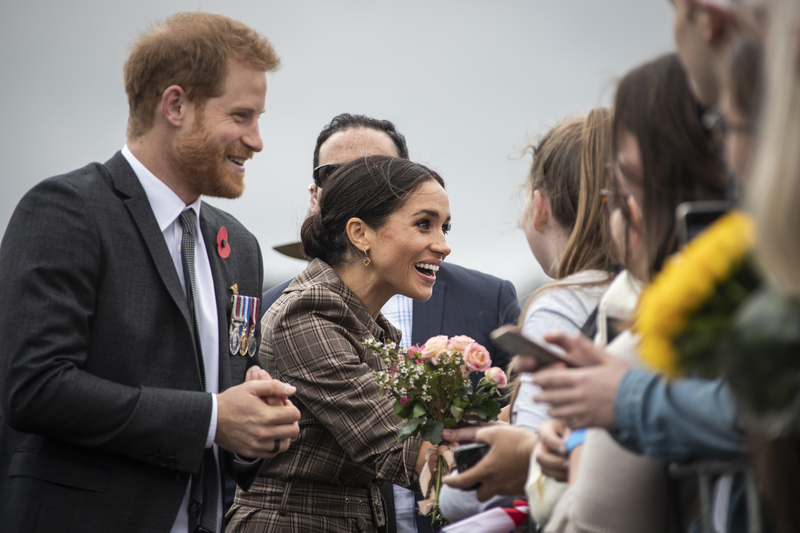 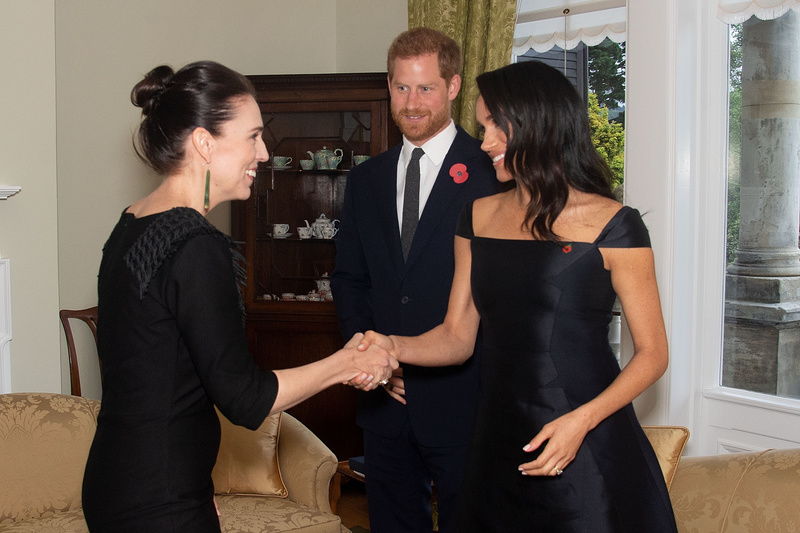 Prime Minister Jacinda Ardern with the Duke and Duchess of Sussex at Government House. Photo: AFP 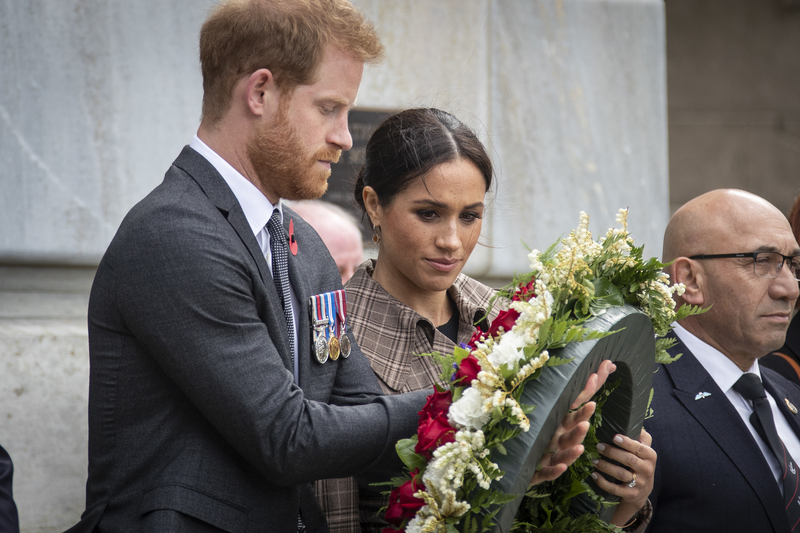 The Duke and Duchess of Sussex at the wreath-laying ceremony at the Tomb of the Unknown Warrior in Wellington. Photo: Pool

Several thousand people turned out for the couple's only public walk-about in Wellington today.

A scream rang out from the large crowd as the couple arrived at Pukeahu National War Memorial Park.

Ahead of their public obligations, the pair laid a wreath of fern fronds on the Tomb of the Unknown Warrior, before bowing their heads for a moment of silence as the Last Post played.

The Duke was awarded the Badge in Gold, New Zealand RSA's highest honour, giving recognition of his work with injured veterans.

The badge was presented by RSA national president B.J. Clark, with the Duchess pinning it on her husband. 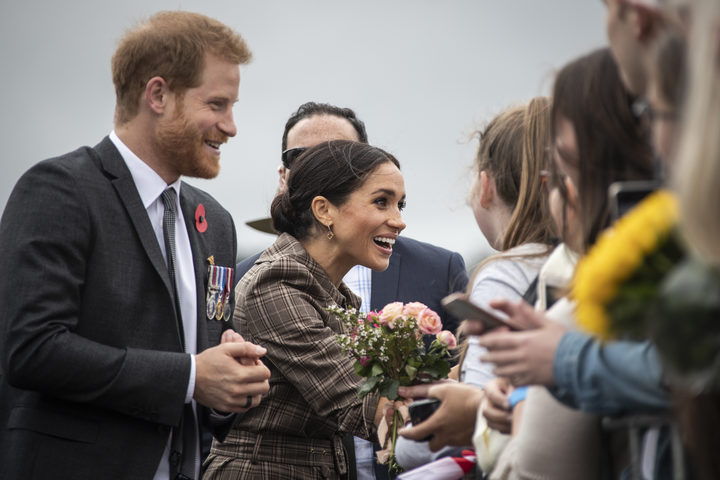 The pair smiled happily as they ascended the war memorial steps to greet the crowd, many of whom were armed with smartphones.

The gifts the royals have received so far include multiple bags of pineapple lumps, a large dog soft toy and a handmade brooch, which Meghan chose to wear.

The brooch designer, Alexandra MacKay, 10, from Wellington said she was in shock after meeting the Duchess and having her accept the red rose brooch she made this morning with her friend Rebecca Sainsbury, 10.

A moment everyone was waiting for eventuated when the Duke was given a buzzy bee toy for the impending arrival of the couple's baby. Prince Harry raised it above his head victoriously.

And just like that they were gone, leaving a lot of disappointed people.

The pair were supposed to wander the entirety of the area where people waited behind barriers, but with time of the essence, the tour had to be cut short.

The Duke and Duchess of Sussex then went on to meet with Prime Minister Jacinda Ardern and Leader of the Opposition Simon Bridges at Government House this evening.

Just before they were due to meet with Mr Bridges a fire alarm went off. The building was briefly evacuated but it turned out to be a false alarm which was likely to have been set off by a vegetable steamer in the kitchen.

They then go on to a reception hosted by the Governor-General celebrating the 125th anniversary of women's suffrage in New Zealand.

Earlier the couple were officially welcomed at Government House, where they were greeted with a hongi.

Prince Harry was then invited to pick up a dagger after a challenge by three Māori warriors. 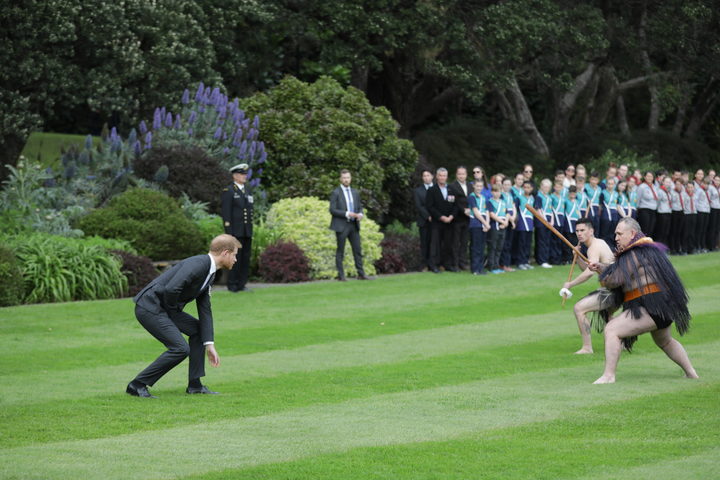 Meeting with the Governor General, Prince Harry complemented the flowers on the table and ordered an English breakfast tea.

"It's just a short visit but I know we've got a full programme, so we're able to see as much as possible," the prince said.

The Governor General said New Zealanders were delighted to have them and welcomed them both back, as both have been to New Zealand before.

Their RNZAF plane touched down in Wellington just before 3pm, much to the delight of fans, who had gathered around the sides of the terminal eager for a glimpse of the royals.

Before touchdown a police dog was brought into the terminal to sniff through the bags of waiting media. 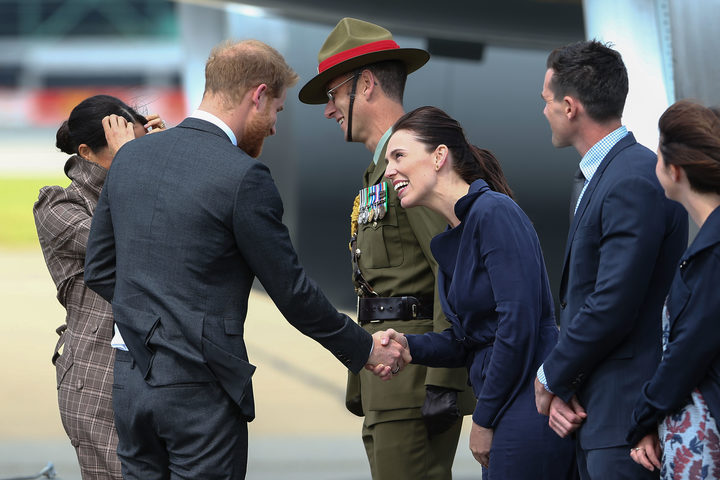 Invictus Games athletes were the first to leave the plane. They were quickly followed by the royal party and then the Duke and Duchess.

The pair held hands as they came down the stairs to the sound of applause from those gathered.

Meghan's hair was in a sleek bun and she wore a brown checkered Karen Walker coat and a simple black dress from ASOS. Both royals were wearing a red poppy.

Once off the plane, they were welcomed by Prime Minister Jacinda Ardern and Wellington Mayor Justin Lester and his wife, before stopping for a photograph with the athletes.

By 3.18pm the couple had left the tarmac, smiling and waving to those at the fence line, who were cheering and whistling.

Tomorrow, the Duke and Duchess will visit young mental health advocates at the Maranui Cafe in Lyall Bay, before flying to Abel Tasman National Park.

They will spend time in Auckland on Tuesday and in Rotorua on Wednesday, meeting with local iwi, conservation groups, and children with parents in prison.