The Duke and Duchess of Sussex have arrived in Fiji, where Prince Harry has tried kava - a traditional non-alcoholic social drink. 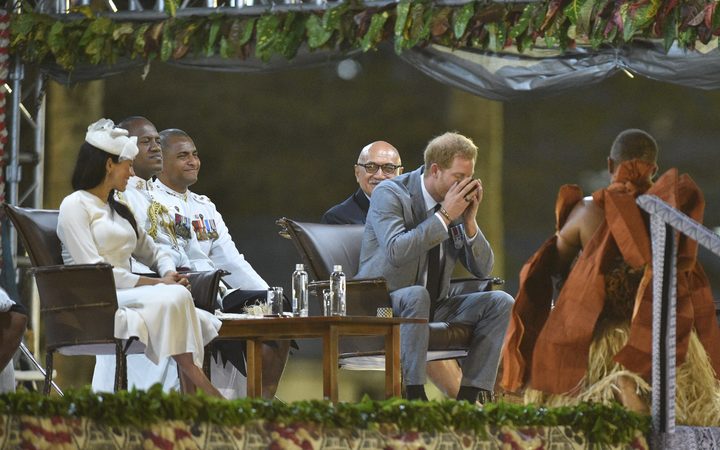 Prince Harry drinks kava as his wife Meghan, the Duchess of Sussex, looks on at a traditional welcome ceremony after they arrived in Suva, Fiji. Photo: AFP

He tried the beverage at a ceremony which featured chants and dancing.

Crowds cheered as Prince Harry sipped the kava, which is used to treat anxiety and stress in some countries but cannot be imported to the EU.

Harry and Meghan were then met by huge crowds of people at the Grand Pacific Hotel, where they waved from a balcony.

The pair's 16-day tour which will also take them to New Zealand, Tonga and return to Australia.

The duke and duchess, who are expecting their first baby, visited Albert Park in Fiji's capital Suva - the same place visited by the Queen and Duke of Edinburgh 65 years ago.

Speaking to the crowds, Prince Harry said: "Bula vinaka! The duchess and I look forward to meeting as many of you as possible during the next two days and celebrating the links and close friendship between Fiji and the United Kingdom."

The couple also attended a reception and dinner hosted by Fiji's president.