The mayor of Wellington is urging members of the public to be on their best behaviour as the capital prepares to welcome the Duke and Duchess of Sussex this afternoon. 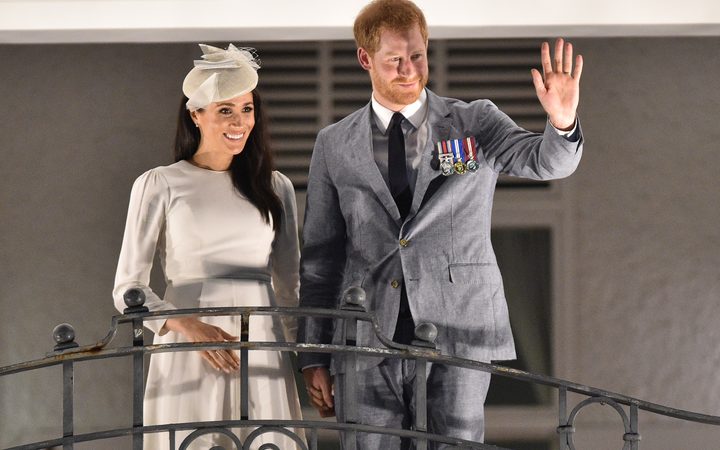 Britain's Prince Harry and and his wife Meghan, the Duchess of Sussex wave from the balcony of the Grand Pacific Hotel in Suva, Fiji. Photo: AFP or licensors

Prince Harry and Meghan will touch down in Wellington about 3pm and will be officially welcomed at Government House by the Governor-General, Dame Patsy Reddy.

They will take part in a wreath laying ceremony at the Pukeahu National War Memorial at the tomb of the unknown warrior at about 4:45pm.

That will be followed by a public walkabout in the Memorial Park.

Justin Lester told Sunday Morning the memorial was where people will have the best chance to see the royal couple.

"So get along early, be respectful of other members of the public and in particular children. Everybody wants to get an opportunity to say hello. Unfortunately not everyone will get that opportunity but some people may get lucky."

It will be the first time the royal couple have travelled to New Zealand together, though each of them visited the country separately before their marriage.

The four-day tour will also take them to Rotorua and Auckland, to meet local iwi, conservation groups, and children with parents in prison.

Meanwhile, the Duke of Sussex commended a Dutch veteran for consoling an opponent whose post-traumatic stress was triggered when a helicopter flew overhead at Sydney's Invictus Games - for wounded military personnel.

Edwin Vermetten was given an award for comforting Britain's Paul Guest during their tennis match.

Prince Harry told veterans at the closing ceremony that was what mateship really looks like.

"It is about more than just your inspiring stories of recovery from injury and illness. It is about your example of determination of optimism, of strength, honour and friendship, or as the Aussies call it, mateship."

Another competitor acknowledged at the ceremony was New Zealander, George Nepata, the first tetraplegic to compete at Invictus.

During a wheelchair rugby match between New Zealand and Australia, Nepata was handed the ball by the green and gold side and pushed over the goal line as a gesture of respect for his efforts.

He played every minute of every game for his team due to a competitor drop-out.

The Kiwi team rose to their feet and performed the Haka to congratulate Nepata.