Analysis - The prime minister was a media darling in New York, while at home the opposition ramped up attacks over the Meka Whaitiri affair and chased ministers along the trail of the Derek Handley emails. Peter Wilson looks at a busy week in politics. 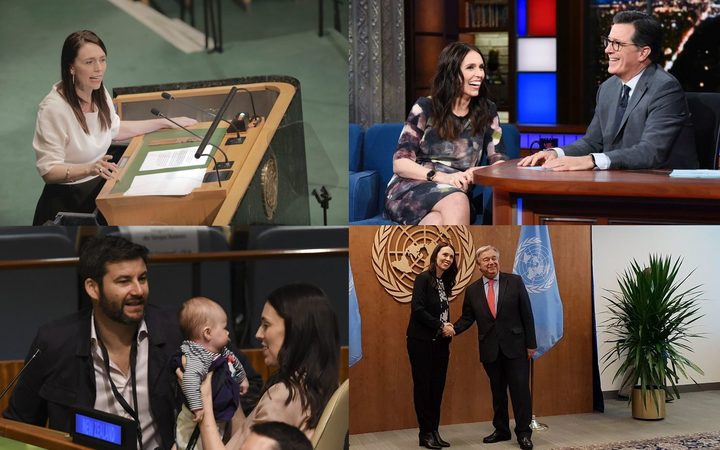 Jacinda Ardern's week-long visit to New York and the United Nations was an example of why overseas trips by prime ministers are win-win events.

They're designed to be, and with partner Clarke Gayford and baby Neve in tow Ms Ardern was a highly desirable media morsel. She was reported to have received many more requests for interviews than it was possible to handle and her choices included CNN's finest Christiane Amanpour.

When she had to tread carefully she was sure-footed, explaining why she declined US President Donald Trump's offer to join his war against drugs and raising issues which affected New Zealand with him during their brief meeting.

With US domestic politics in crisis over sexual assault accusations against Supreme Court nominee Brett Kavanaugh it's doubtful the president will remember their meeting. He probably won't remember most of the world leaders he met during the UN's annual summit.

New Zealand media with Ms Ardern niggled away with questions about the extent of her contact with Derek Handley during the botched appointment process and the assault allegation against sacked minister Meka Whaitiri.

Neither of those issues was new and developments during the week weren't sufficiently serious to unsettle Ms Ardern or overshadow her trip.

In Parliament on Tuesday National succeeded in persuading Speaker Trevor Mallard that a snap debate on Ms Whaitiri's sacking was justified, and it was clear they had discovered something about the incident involving the former minister and her press secretary.

"We have Meka Whaitiri accused of assaulting a staff member, we understand leaving bruises on her," said National MP Amy Adams.

"An assault, members of government, if you've forgotten, is a criminal offence."

Up to that point little was known about the incident, although unsourced allegations of pushing and shoving had been reported. There had been no previous reference to a criminal offence.

Ms Ardern sacked Ms Whaitiri after receiving an inquiry report, but it was still under wraps awaiting processing before it could be published.

Ms Adams claimed it was being sanitised before release, and that the public deserved to know what had happened.

Labour MPs were quick to defend Ms Ardern's actions, saying she had been fair and decisive. And Labour's Māori caucus continued to support Ms Whaitiri, saying she regretted what had happened and deserved a second chance.

But it was payback time for National - MPs remembered the way Labour in opposition had hounded their former colleague Todd Barclay over the recording of conversations in his electorate office and the relentless campaign against Judith Collins during the Oravida affair.

Ms Adams questioned Ms Whaitiri's fitness to remain in Parliament and accused Labour MPs of having no compassion or concern about the victim.

On Thursday, The New Zealand Herald published the leaked inquiry report and it confirmed what Ms Adams had told Parliament - the press secretary was bruised when Ms Whaitiri seized her upper arm during their encounter, and photos were taken of the injury.

Ms Whaitiri had missed a photo op with Ms Ardern outside a marae in Gisborne, and she had blamed the press secretary.

An inquiry was launched to find out who leaked the report. No such inquiry has succeeded in the past.

While this was playing out, National continued to harass Acting Prime Minister Winston Peters over Ms Ardern's involvement in the botched appointment of a chief technology officer.

Derek Handley was offered the position by Clare Curran, before she was sacked from the digital services portfolio and subsequently resigned as a minister.

There had been email and text message contact between Ms Curran, Ms Ardern and Mr Handley, and National suspected the prime minister had inappropriately influenced the decision.

Leader Simon Bridges suggested Ms Ardern had misled Parliament - a serious offence - during her replies to questions before she left for New York.

The prime minister denied this, and so did Mr Peters during intense questioning this week.

On Thursday, the government released all the communications surrounding this issue, hundreds of pages of documents.

They showed Ms Curran and Ms Ardern had discussed the process and that the prime minister's staff had been in contact with Mr Handley.

Megan Woods, who now holds the digital services portfolio, said the documents exonerated Ms Ardern: "It is clear from these communications that the prime minister was not involved in the shortlisting of candidates."

National won't give up on this, "The prime minister and her office are in the thick of it," said Paula Bennett.

To get any traction, the opposition needs to have a tighter focus on what it is trying to prove. The paper trail has become so confusing it's doubtful whether many people outside Parliament understand or care about who said what or who answered which email.