Look, a week out from a presidential election, shockwaves are inevitable, but the reality of the revelations may not match the explosive hyperbole.

What is this so-called reality?

FBI Director James Comey wrote to the US Congress saying he planned to examine new emails that appeared "pertinent" to the agency's lapsed investigation into the private server Democrat presidential nominee Hillary Clinton stupidly used as secretary of state. The emails were discovered on a laptop shared by Clinton aide Huma Abedin and her estranged, scandal-engulfed husband Anthony Weiner, during an unconnected inquiry. The FBI had not yet seen the emails nor requested a warrant, so did not know whether the emails were sent to or from Clinton, or whether they were duplicates of emails already examined in their earlier inquiry, let alone whether they contained any classified information.

Okay but that's a bit long and dull and full of qualifications.

When will the new probe be complete?

That'll be another don't know. It seems highly unlikely it will be done before election day.

How has the Clinton camp responded?

They're not very happy about it.

Incandescent with eye-popping rage, really. They don't buy the argument that Comey was duty-bound to reveal the new line of inquiry and seeking to forestall any leak which could be interpreted as covering up something more sinister.

They declare that the Obama-appointed Republican bureau boss ignored Justice Department advice to the contrary, that he breached regulations, if not laws, that prohibit interference in an election campaign, that he is fanning conspiracist flames, and that he is guilty of a double standard in refusing to comment on reports ("explosive" reports, even) of FBI inquiries into links between Republican rival Donald Trump's campaign and Moscow.

Trump! Got a long way into this US election focused column before mentioning Trump.

Some kind of record.

How has Trump responded?

Pig in mud. Trump believes the email find is "bigger than Watergate". He has dramatically revised his opinion of the formerly hated Comey, and now thinks the election may not be completely rigged after all.

His campaign manager delighted in Hillary's "never-ending scandalabra". Apart from feeding into the "crooked Hillary" slogans Trump has been foghorning, the news has dramatically shifted the spotlight off Trump's own troubles, including the behaviour of his charitable foundation, his dodgy tax affairs, his boasting about being a sexual predator, numerous sexual assault allegations, and the powder keg of violence building within his support base following a refusal to say he'd accept the election result.

And shifts the spotlight back to someone who used the wrong email address.

Yes. Though it's not entirely trivial.

How did this all begin?

A 2013 State Department review of the 2012 attacks in Benghazi, Libya, in which four Americans were killed, found that Clinton, who had then been secretary of state, had used a private email account. This breached official guidelines designed to ensure that classified information did not make its way outside the protected servers and potentially make its way into enemy hands. 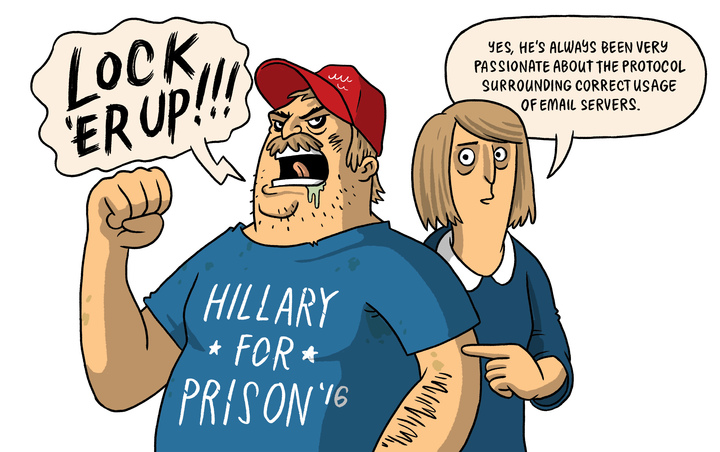 Did anything make its way into enemy hands?

Not as far as we know.

However, late in 2014, Clinton responded to a State Department request and provided them with more than 30,000 emails. In early 2015, the State Department told a congressional committee investigating Benghazi that Clinton had used the private server routinely.

She subsequently approved public release of those 30,000 emails, while saying that personal messages, numbering around 32,000, had been deleted. In mid-2015 it was found that classified emails were among those found on the private server and an inquiry was launched.

In July of this year, Comey himself said that despite Clinton having been "extremely careless" there were insufficient grounds for charges.

And we'd know nothing of these emails were it not for Julian Assange's WikiLeaks, which probably got the emails from Putin's Russian hackers, yes?

What part of that is wrong?

Pretty much all of it. The WikiLeaks emails, which may have a Russian source and are also being investigated by the FBI, were hacked (probably) from Democratic National Committee staffers and Clinton campaign chair John Podesta.

Have those WikiLeaks emails proved damaging?

They have cast some shadows on the operations of the charitable Clinton Foundation, and revealed underhand tactics against Bernie Sanders, but proffered no smoking gun. They also showed that former New Zealand ambassador Mike Moore had trouble getting his calls taken.

And Weiner? Where does Weiner fit in?

Weiner is the former Democrat congressman, Clinton ally, serial dick-pic-sender and estranged husband of Huma Abedin, Clinton's high-level aide and confidant. The FBI encountered the emails that prompted reviving their investigation while searching devices used by the former couple as part of an investigation into claims he had sent lewd texts to a minor.

That's one way to put it. Weiner, who in the eponymous film about his ill-fated New York mayoral campaign noted, "I have this virtually unlimited ability to fuck up things", could now be responsible for fucking up the history of the world.

This is an opinion column.

But really? Clinton is still going to win, isn't she?

The polls, which were already tightening, have tightened further - in some cases the Republican candidate has even overtaken Clinton - and Team Trump has a fresh head of steam.

OK, sure, Trump may call himself "Mr Brexit", but isn't the truth that the comparison is overblown, that with more than 22 million Americans having already cast early votes, the formidable Clinton ground game in battleground states, the electoral college map, the modest proportion of undecided voters and the unanimity within the prediction markets, there is only the slimmest chance of an upset?

That is probably true. It probably is.

This column is part of a weekly series, published every Wednesday, by graphic artist Toby Morris and journalist Toby Manhire.