New Zealand's first case of Omicron was identified, as the country hit its 90 percent full vaccination target, children between five and 11 will be able to get the vaccine, and protesters marched on Parliament demanding an end to the vaccine mandates and restrictions.

Here's how the day unfolded. 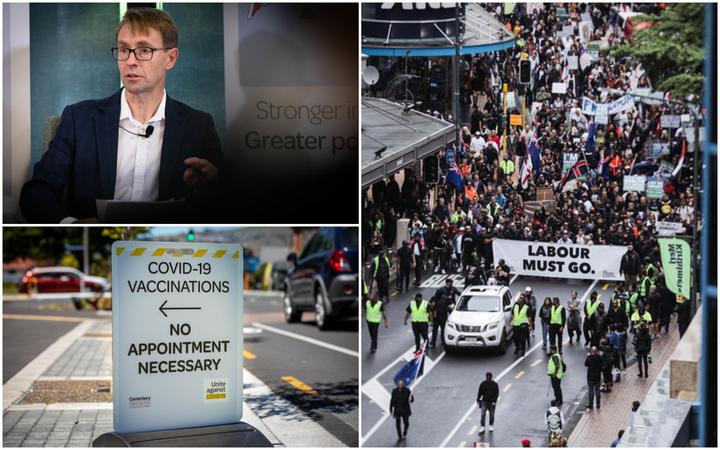 The first case of Omicron has been detected in New Zealand.

A person who was double-vaccinated tested positive for the virus on Sunday after arriving in the country from Germany in Auckland via Dubai.

They have now been moved to the quarantine facility at the Sudima Hotel in Christchurch.

The person will spend a full 14 days in quarantine - and all those on the same flights and hotel floor will have to remain in their hotel for 10 days.

Director-General of Health Dr Ashley Bloomfield is not ruling out using localised lockdowns if the Omicron variant slips into the community.

University of Otago epidemiologist Michael Baker said even one case of Omicron in the community should be enough to prompt a localised lockdown.

The country has hit its 90 percent full vaccination target against Covid-19.

Seven of the country's 20 DHBs have reached the 90 percent mark for second doses, including all three in Auckland.

And 94 percent of the eligible population nationwide have had their first dose.

Cabinet will now consider advice from officials and the Health Ministry before deciding when and how to roll out the vaccine across the country.

If approved, the programme is expected to start next month.

The two-dose vaccine is an adapted version of the adult version.

The ministry said work was well underway to ensure a safe and efficient rollout.

About 3000 people marched from Civic Square to Parliament to demand an end to the Covid-19 vaccination mandates and traffic light restrictions.

The protest - organised by Brian Tamaki's Freedom & Rights Coalition - took place the day after Parliament rose for the year.

Police had to close off Willis Street and part of Lambton Quay.

Metlink services which led to the Lambton Quay Interchange were diverted while the protest was underway.

Parliamentary Security fenced off the forecourt to prevent any protesters entering the Parliament building, and staff were warned to stay away from the windows.

About 50 police officers stood on the forecourt.

There were 91 new cases of Covid-19 in the community today.

Two are in Northland, seven are in Waikato/King Country, 10 in Bay of Plenty, one in Rotorua, 16 in Taranaki and the remaining cases in Auckland.

The new cases in Northland are in Ruakākā.

In Taranaki, the new cases are in Eltham, but all but one of them were reported yesterday.

And 58 people are in hospital, with four in either ICU or a high dependency unit.

A wastewater sample collected from Gisborne on Tuesday detected the virus.

This is the sixth positive wastewater result for Tairāwhiti in recent weeks, indicating there may be unknown cases in the community.