Explainer - When South Africa reported a new variant of Covid-19 to the World Health Organisation (WHO) on 24 November, 2021, it sparked a chain of events that quickly led to Omicron - the 15th letter of the Greek alphabet - becoming a household name. 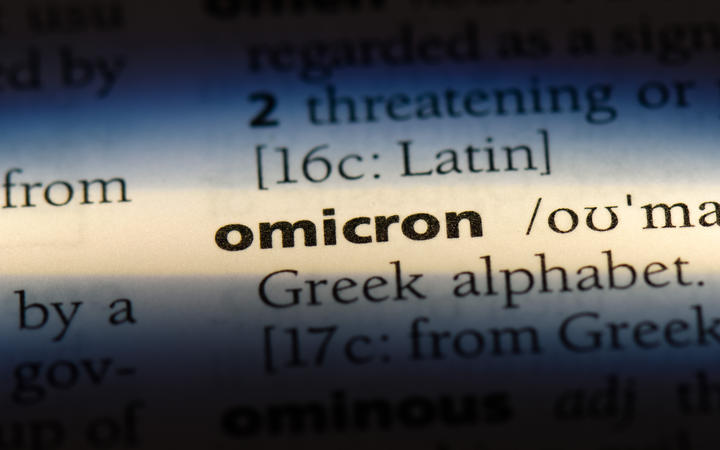 The virus which causes Covid-19 - SARS-CoV-2 - is constantly evolving and November 2021 saw the emergence of a concerning new variant: Omicron. Photo: 123rf

Two days after being alerted to its existence, the WHO's Technical Advisory Group named the new variant Omicron (or lineage B.1.1.529 in scientific circles) and classified it a Variant of Concern (VOC).

But what exactly is a VOC and how concerned should we be at Omicron's spread?

Will existing vaccines against Covid-19 be effective in slowing Omicron's transmission and how will its spread affect hospitalisation and mortality rates?

Will it get to New Zealand? And if it does, how might that impact the government's planned international border reopening in 2022?

RNZ is here to clear it all up with input from the experts.

A Variant of Concern

The virus which causes Covid-19 - SARS-CoV-2 - is constantly evolving and the WHO stated in a December 2020 Q&A that hundreds of variations had already been identified world-wide.

However not all variants are of concern to scientists.

The ones we tend to hear about are those the WHO is keeping an extra close eye on because the mutations they've acquired benefit the virus in some way; they may have demonstrated an ability to spread more easily, for example, or to cause more severe disease.

Those the WHO thinks may be troublesome, are initially designated as Variants of Interest (VOI).

If further investigation and analysis of data finds any of the following though, the variant will instead be named a VOC:

Only five variants have achieved VOC designation since the pandemic began in March 2020: Alpha, Beta, Gamma, Delta ... and now Omicron.

The emergence of Omicron

Although it was first reported to the WHO by South Africa, subsequent data showed Omicron was initially detected in four foreign nationals who entered Botswana on 7 November, 2021.

The quartet tested positive for Covid-19 four days later and a statement from Botswana's government said genomic sequencing carried out on 24 November confirmed the cases were caused by the new variant.

Scientists in South Africa raised the alarm due to a sudden surge in Covid-19 cases in the country's Gauteng province, which they suspected were being driven by the new variant they'd identified, The New Yorker reported.

The SowetanLIVE website reported on 25 November, 2021 that almost 2000 cases had been detected in the region in the previous 24 hours.

A Nature.com article from the same day noted that a particular concern identified was the large number of changes to the new variant's spike protein, which scientists feared could increase its transmissibility and possibly minimise the effectiveness of existing vaccines.

Within days, cases were being identified globally and countries around the world - including New Zealand - reacted to the WHO's designation of Omicron as a VOC by restricting travel from a number of African countries.

However the WHO criticised those measures, with its regional director for Europe, Dr Hans Kluge telling The Guardian on 7 December the bans were too late "because Omicron is already everywhere". 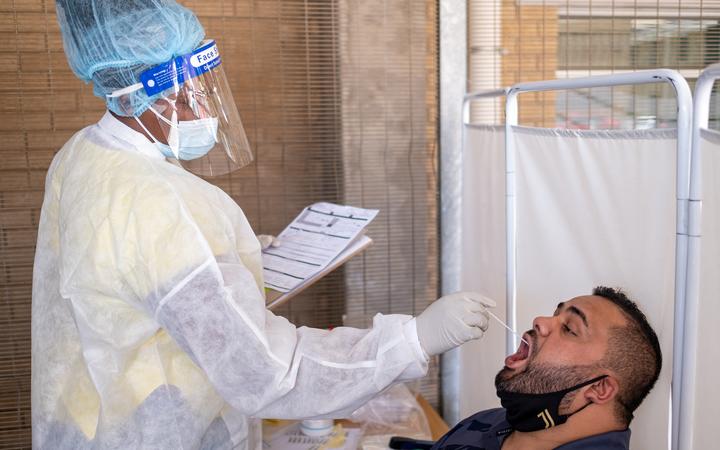 A healthcare worker conducts a PCR Covid-19 test in Johannesburg, South Africa on 30 November, 2021 as Omicron starts spreading across the globe. Photo: AFP or licensors

By 14 December, 2021, the WHO said cases of the Omicron variant had been detected in 77 countries, Reuters reported.

What do we know about Omicron's mutations?

When compared with previous SARS-CoV-2 variants there were a few things that immediately worried scientists about Omicron.

The first was the sheer number of mutations it displayed, reported the BBC - 50 overall, with about 30 of those located on the spike protein.

The reason this is such a concern is because the spike protein is the part of the virus most of the existing vaccines target.

Until Omicron's emergence, vaccines were showing good efficacy in preventing both Covid-19 infection overall and severe disease in those who contracted it despite being vaccinated.

The fear is that the changes displayed on Omicron's spike protein will allow it to evade people's existing immune responses - whether they're a result of vaccination or previous infection.

If you think of vaccination working by showing your cells a picture of the enemy (the SARS-CoV-2 virus) so they can prepare to do battle if they later encounter it, Omicron's spike protein changes are like the virus putting on a Halloween mask to disguise itself, so it's not recognised as an enemy anymore.

Here's a great graphic shared on Twitter by Müge Çevik, an infectious diseases researcher at the University of St Andrews, which shows just how different Omicron looks to Delta:

1- Genomic data:
The biggest concern with omicron is that it contains >30 mutations in just the spike protein, the part which helps it enter human cells and the target for vaccines. This mutation profile is very different than other VOCs. (2/n) pic.twitter.com/9OGy1SUwbg

As if these changes weren't concerning enough, scientists had another reason to be immediately wary of Omicron: 10 of those spike protein mutations are located on a part of the virus called the receptor binding domain, which is the first part of the virus that makes contact with our bodies' cells.

The Delta variant, which previously spread around the globe driving multiple waves of infection, was able to do so with just two mutations on its receptor binding domain.

What we know so far

By mid-December 2021, some initial data about Omicron and its impact had begun filtering through ...

What are the facts on Omicron? The picture is getting clearer: Omicron spreads faster and is better able to escape immunity than other variants. Severity is still unknown, although it's likely vaccination reduces severe disease. The virus has adapted; we must as well. 1/thread

An over-reaction or a serious threat?

In the time since Omicron was discovered, scientists around the world have been racing to establish just how worried we should be about it.

Speaking to media from the WHO's headquarters in Geneva, Switzerland, on 8 December, the organisation's director-general Tedros Adhanom Ghebreyesus admitted it was "still difficult to know" what the variant's impact would be, though he acknowledged it "could have a major impact on the course of the pandemic".

He noted that a "consistent picture of rapid increase in transmission" was beginning to be observed in relation to Omicron, but said the rate of increase relative to other variants remained "difficult to quantify".

However at a briefing a week later, on 14 December, Ghebreyesus was more forthright about the threat the variant posed.

"Omicron is spreading at a rate we have not seen with any previous variant," he said.

"We're concerned that people are dismissing Omicron as mild. Surely, we have learned by now that we underestimate this virus at our peril.

"Even if Omicron does cause less severe disease, the sheer number of cases could once again overwhelm unprepared health systems."

He added that vaccines alone would not get any country out of "this crisis" and said ongoing public health measures like mask-wearing and distancing would continue to be required.

So, what does this mean for New Zealand?

Prior to New Zealand's first case of Omicron being detected, local observers, including epidemiologist Michael Baker, evolutionary virologist Jemma Geoghegan and Covid-19 data modeller Michael Plank said it was inevitable Omicron would reach the country, so we needed to use the time before that happened to ensure we were as prepared as possible.

Plank and Baker also cautioned against the government's plan to relax some of the existing border restrictions in early 2022, saying they should be put on hold until more was known about the threat Omicron presented.

Plank said the danger of letting such a seemingly transmissible variant spread unchecked could put pressure on the health system.

"If it spreads that quickly you get such a large number of cases that even if the majority of those cases are relatively mild it could still put significant numbers of people in hospital."

Prime Minister Jacinda Ardern said at a post-Cabinet briefing on 13 December, 2021 that ministers would "receive further advice on the Omicron variant in early January" to ensure the decision to ditch MIQ requirements for some travellers remained the correct one.

Geoghegan told Nine to Noon in late November 2021 it was "surprising" that Omicron appeared to be outcompeting Delta, so it was right to be concerned.

Vaccinations and booster shots would continue to be the most important weapons in New Zealand's pandemic fight she said, and vaccine modifications (to help combat Omicron), coupled with drug therapies that were showing a "significant layer of added defence" would also help.

Baker told Sunday Morning on 12 December that people should be "lining up" to get their Covid-19 booster shots as soon as they were eligible.

"We need to look at accelerating the rollout of the third dose in New Zealand and obviously everyone who's already gone for six months or longer since their second dose, now of course you can get your booster."

* This article was updated on 19 December to reflect the arrival of Omicron in New Zealand.