Water levels have fallen in Marlborough, revealing the extent of the damage caused by heavy rain over the weekend. 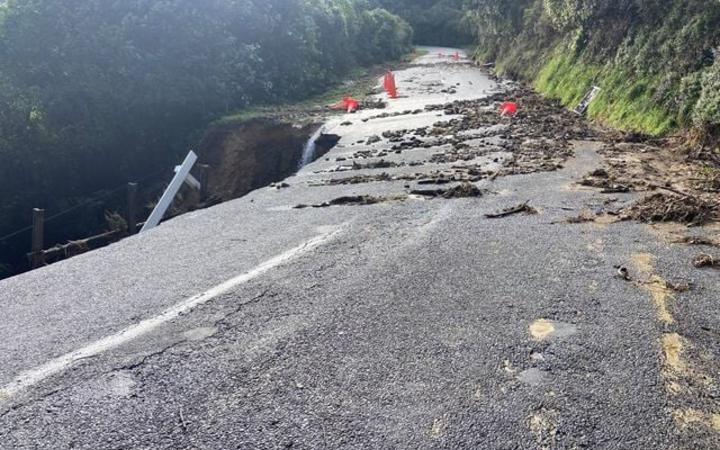 As council, Civil Defence and other services assess the scale of the destruction, residents in cut off areas are waiting to hear when the roads will be reconnected.

Waka Kotahi said just one highway at the top of South was still closed, with State Highway 63 Renwick to Tophouse Road/St Arnaud unlikely to open today.

Judy and John Shone live near Moenui in the Mahau Sound, where slips and damage to Queen Charlotte Drive and other roads mean they remained cut off from the rest of the South Island.

"The Pukenui Road has had a huge hillside collapse which has taken out part of the road right down at the bottom and it's taken out two houses," Judy Shone said.

Both homes were unoccupied at the time.

"The roar is one thing, but when you hear this absolute rumble and all the bush now is down in the water, we have not coffee-coloured water. We have chocolate-coloured water."

Judy Shone said the neighbours looked out for each other, but they had not heard from council or Civil Defence.

"It is distressing and stressful I suppose for us, we've been here nine years and we haven't really experienced anything like this other than the lockdown." 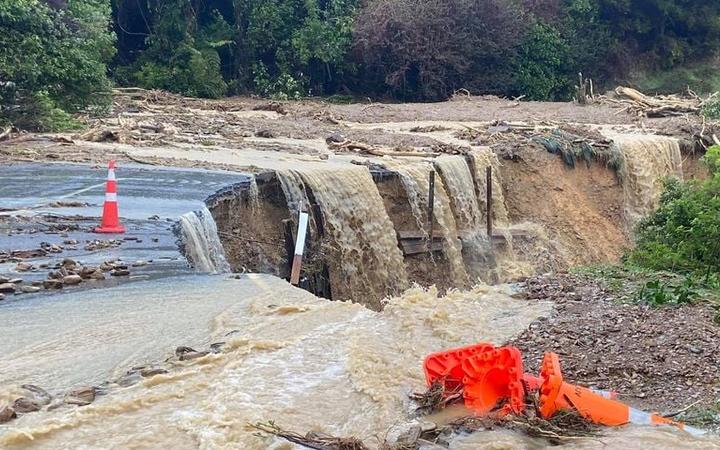 Another section of Queen Charlotte Drive at the height of the weekend downpour. Photo: Facebook / Marlborough District Council

Further up in the head of the Kenepuru Sound, the road to Ian Hamlin and Kate Betteley's home was also cut off.

They were out of communication for two days while cellphone towers were out.

"This road is susceptible to slips and washouts, so it is something that we live with and probably once a year we have a big event like this ... and that takes it out. So, you know, usually not for too long," Hamlin said.

Hamlin said the Marlborough Sounds is a large network of hard to reach places.

"All our rates go on the road, there's nothing else we pay for really. The council are great, they keep it open in pretty adverse conditions because there's quite high rainfall, it's unstable and steep."

The couple provide accommodation for those walking the Queen Charlotte Track and with no road access they have already had to change several bookings.

"We've got other people coming in and they won't be able to, we'll have to reschedule because the track's closed and the road's closed and we're stuck here."

Marlborough Civil Defence controller Richard McNamara said about 1100 people typically live in the Sounds, with about 800 in the worst affected areas in the Queen Charlotte and Kenepuru Sounds.

"This flood event is unprecedented in living memory. I think the devastation that it's caused is only now coming to light with the clearance of the clouds and the rain." 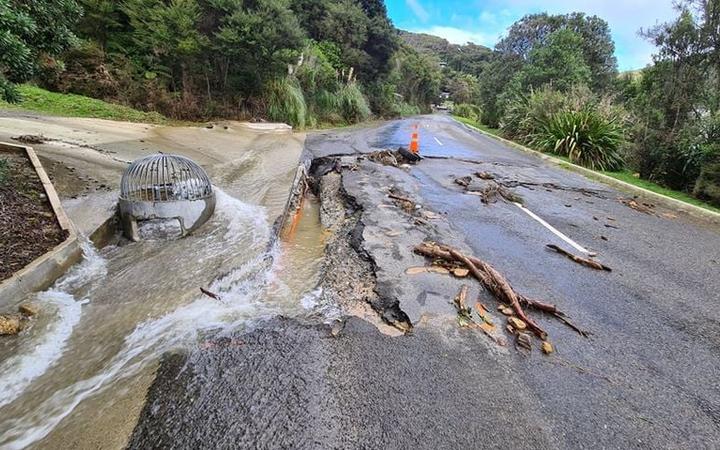 A section of road near Portage in the Marlborough Sounds. Photo: Facebook / Marlborough District Council

Dozens may be homeless - mayor

Buller Mayor Jamie Cleine estimates up to 100 people could be left without a home following the weekend's flooding on the West Coast.

While over 2000 people have been cleared to return home, more than 100 people are still staying at the evacuation centres.

Cleine told Checkpoint the government might need to help provide temporary accommodation such as campervans, motorhomes or portable houses.

"It's difficult to quantify until you know exactly what numbers you're dealing with."

He said they now need to start thinking about whether to red-zone some parts of flood-prone Westport but that was "a discussion for another day".

Some houses had flooded for the first time while some homeowners had experienced water in their properties several times.

Recent retiree Stephen Switalla only moved to Westport last year to be closer to his father-in-law.

Switalla's house on the northern end of Romilly Street, which is among the worst affected areas, had water about 30 centimetres high during the peak of the flood.

He never expected to be in this situation.

This afternoon, he was allowed back inside his home.

"They say it's gonna be quite a while [before I can return] because even the doors - you can't even close the doors - they are warped in there as well. They will have to be all redone. It is complete devastation ... it's disheartening really," he said.

Stuck at the local Salvation Army centre for the past few nights has been Pete Lusk, whose house on Derby Street is also damaged by the flood.

He said authorities needed to be more upfront about the flood risk in the town.

"When you move to Westport and the river is in flood, you are on an island and the bridges can be closed, which they were [this time].

"So if the water kept rising, virtually everyone in this town of 6000 [sic] would be flooded out. Luckily the river didn't keep rising," he said.

Lusk believes the entire town of Westport should be shifted due to the danger posed by floods.

"This town will have to be moved. There's no doubt in my mind because all along the Coast and Buller they are building rock walls to keep the sea back, because the sea's rising.

"And I believe that the storms will become more frequent," Lusk said. 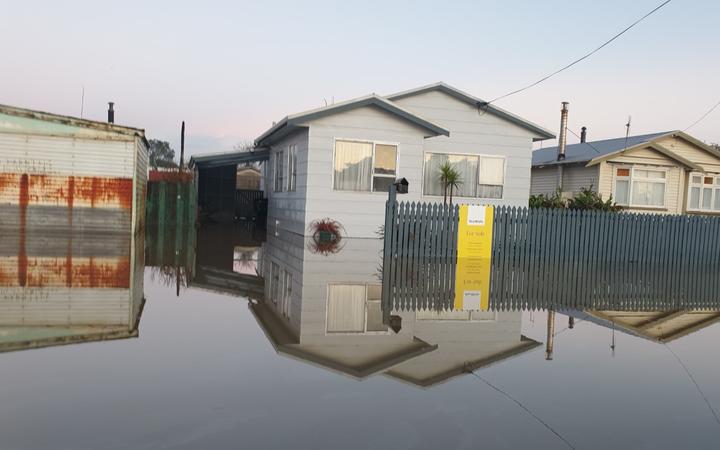 Westport needs to be moved to a new location because of its flooding risk, a resident says. Photo: RNZ / Anan Zaki

Seventy-four-year-old Lorraine Williams was also spending another night in a welfare centre.

But she wished she was told more about the danger floods pose to her house before she bought it a few years ago.

"When we bought ours the land agent never told us and if she had, we might not have bought that house," Williams said.

Some hospital patients in temporary ward

A makeshift hospital ward has been set up in a Buller community club after flooding triggered evacuations.

Seventeen patients were evacuated from Buller Hospital on Saturday as the floodwaters raged through the region.

West Coast District Health Board incident controller Philip Wheble said some patients were discharged, while others were taken to the hospital in Greymouth.

Three patients were now in the makeshift ward set up at Club Buller.

Wheble said extra staff have arrived from Greymouth to relieve the locals, so they can check on how their homes have fared.