The Department of Conservation is investigating a pod of orca sighted in the Marlborough Sounds in an effort to reunite a stranded calf with its family. 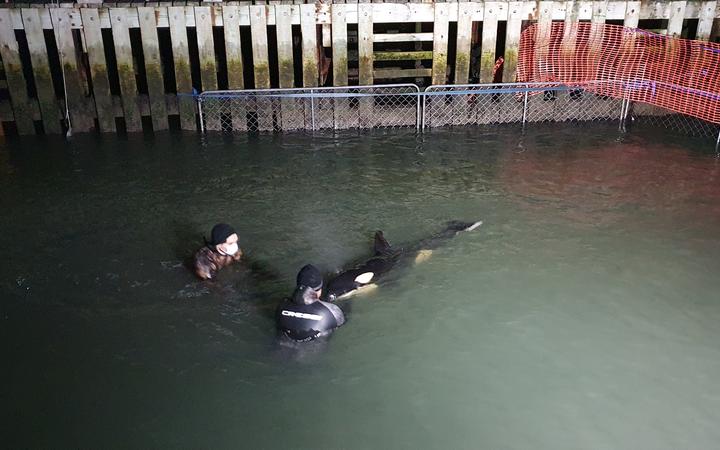 Toa is staying in the temporary holding pool for now. Photo: Department of Conservation

The orca calf which has been named Toa is believed to be between four and six months old and stranded on rocks north of Wellington last Sunday.

Department of Conservation (DOC) Marine Species Manager Ian Angus said in a statement "We have still to confirm whether or not this is the orca's pod, and there are currently people in the Sounds trying to get photographs to confirm".

DOC welcomed any photos from people who spotted the pod but asked them to keep a 50m distance.

Experts have decided against moving the stranded orca calf from a temporary portable pool back to its sea pen.

Ahead of the weekend's bad weather, the orca was shifted into the pool and it had been thought it would be moved back into the sea pen today.

However, a health warning was issued for the harbour, meaning it was unsafe for swimming.

More bad weather was forecast for Wednesday and DOC wanted to minimise the number of times the orca had to be shifted, Angus said.

"Although the calf is still in a stable condition, it has been in our care for more than a week now. We are conscious this is a long time for the calf to be away from its pod and mother, and to be kept in temporary enclosures.

"To help reduce the stress as much as possible, we will continue to restrict access to the site and appreciate the ongoing respect and support from the public."

Anyone who sights orca pods off the lower North Island's west coast or in Marlborough Sounds is urged to provide as much information as possible to DOC, via marinemammals@doc.govt.nz or by calling 0800 DOC HOT.

Essential information includes the location of the pod, the the animals are travelling in, and photographs or videos which clearly show the saddle/back markings of the animals and their dorsal fins.