A pod of orca may have been sighted near where a baby orca stranded last Sunday. 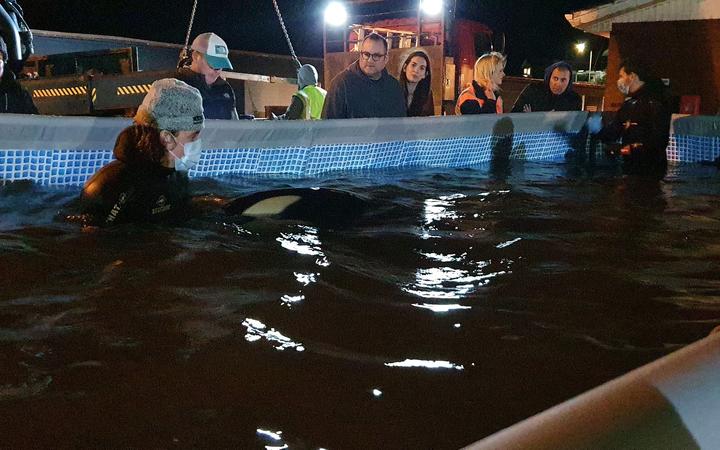 Toa is in his new pool while efforts continue to find his pod Photo: SUPPLIED/ Department of Conservation

Department of Conservation (DOC) said it is a credible sighting off the Kāpiti Coast, but weather conditions currently make it unsafe for further investigation.

Toa was stranded from his pod last Sunday near Plimmerton, north of Wellington.

DOC's marine species manager Ian Angus said at the moment any reunion attempt would be too dangerous for both the people involved and the orca calf, which has been named Toa.

"Once conditions improve we will be in a better position to investigate the sighting further, and make a plan from there."

Toa is in a stable condition and remains in the temporary pool it was transferred to on Thursday evening due to concerns about the incoming storm.

People should not travel out searching for the pod during the storm, Angus said.

An ongoing operation to care for the orca calf is being led by DOC with support from Orca Research Trust/Whale Rescue Trust, local iwi Ngāti Toa Rangatira, and the local community.