Two orca sightings have been reported today in what's now an international effort to keep a lost calf alive.

The Department of Conservation has been working with veterinarians to gather advice from scientists overseas while they monitor the 6-month-old calf's health in a fenced off a section of Plimmerton harbour, north of Wellington

"This has gone from a community event, into a nation-wide event, and now it's gone global because we're in consultation with people all across the country and also around the globe", said Ingrid Visser, founder of Orca Research Trust today.

The orca calf has been unofficially named Toa - a Māori name which can translate as courage.

It was still weaning from his mother before being separated, so overnight he was given fluids from the veterinary team. Visser said it had made a big difference to his health, and would allow a wider window to find his family.

A cycle of volunteers have been the water with the baby orca at all times.

"He's been using all of the space, which is really exciting - last night he was even diving down to the bottom of the sea pen and checking it out", Vissor said.

Two sightings of orca pods have been reported by the public, one as far up as Marsden Point and the other closer to home in the Marlborough Sounds.

And a sighting of a pod earlier today near Raumati on the Kāpiti Coast saw the Department of Conservation (DOC) dispatch a boat to confirm if it was the family of the stranded calf. The description of the pod matched eyewitnesses reports from when the calf stranded on Sunday. 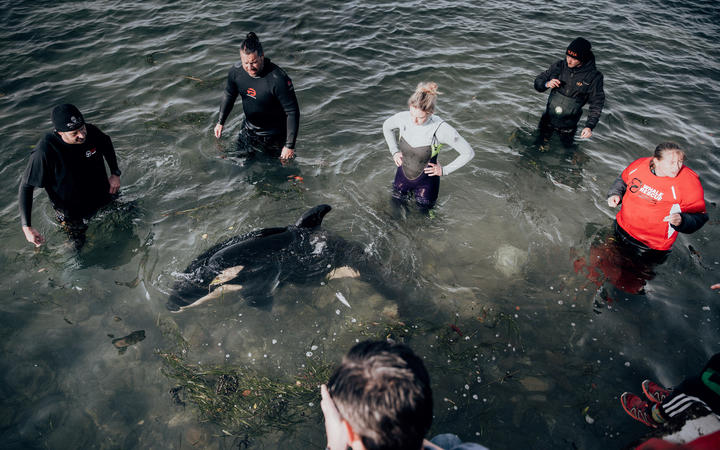 Volunteer pilots in private aircraft from the Kāpiti Districts Aero Club searched the wider north and south of the area, from Malborough Sounds to Whanganui. The private aircraft were donated for use by members of the club.

"The pilots, the aircraft, the fuel, the time is purely being funded by the members at their own expense," said Josh Hay, an instructor at the Aero Club.

The aircrafts fly lower than a commercial flight so crew inside can scan the sea with their eyes.

"If there's anything down there to be spotted, we can see it a lot easier than someone sitting on a boat. So it's just a small way to give back", he said.

Volunteers said the wider community had banded together over the last two nights, when temperatures had gone below zero degrees.

Wetsuits, weather gear and plenty of kai have been sent to the large pool of volunteers working around the clock.

DOC marine species manager Ian Angus said this morning that further plans depended on the health of the orca.

"That's something we're monitoring carefully, But past experience has taught us that the calves can survive for a while."

DOC are still urging the public to report orca sightings, particularly between Malborough Sounds and Whanganui.

They were especially interested in location details, the direction the pod are travelling, and encourage clear photos of the pods to be taken.