When flood waters swept away a caravan from Rick Whaitiri's property in Tokomaru Bay on Sunday morning, he thought the house might be next. 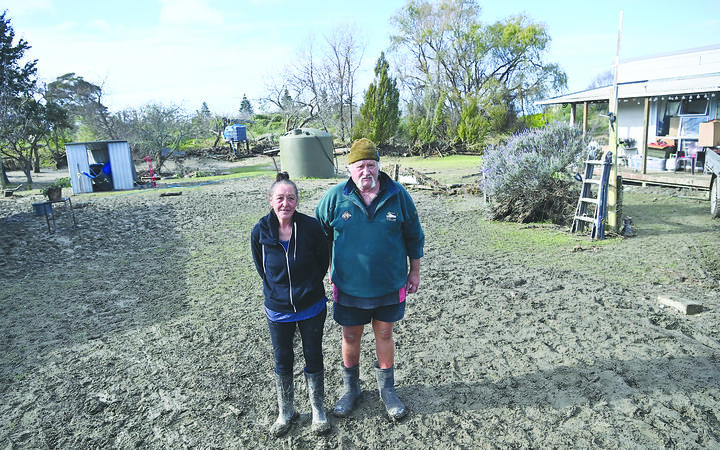 Tokomaru Bay residents Jan and Rick Whaitiri standing in the deluge of mud and silt left behind by severe rain over the weekend. Photo: Paul Rickard/ The Gisborne Herald/ LDR

Jan Whaitiri lives in the caravan that washed off her brother's East Coast property after heavy rain caused a deluge that flooded the remote Tairāwhiti settlement on the weekend.

"Something just gave way big time and it was all here instantly, and that whole road was just a river," Rick said of the moment he realised rushing water had surrounded his home.

He watched as the caravan parked in his garden was lifted up on the fast-running flood waters and swept away, followed by a shipping container.

"We were looking at that window to get out, but it was too high, too fast, too swift," he said, pointing to a window in his house.

"We waited until it went down because it was too dangerous to get out. If we got out, we would have got swept away."

They lost two caravans in the flood, but found the shipping container lodged in a tree about 500m away.

Jan said the caravan contained everything she owned.

"My clothes, my bits and pieces, everything." 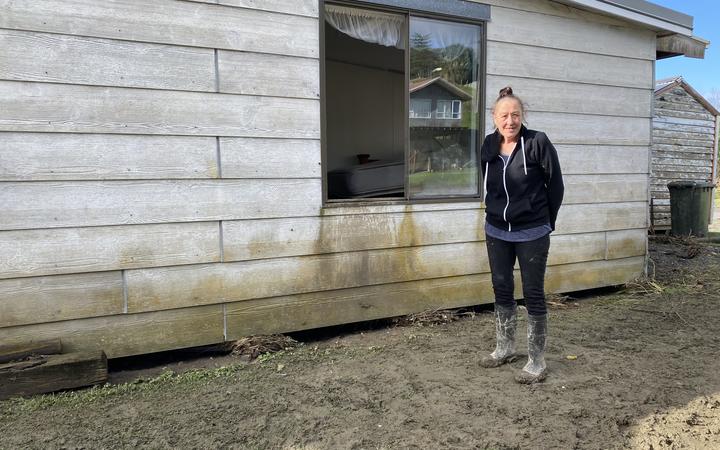 Jan Whaitiri at the window of her brother's house, where floodwater was rushing through. Photo: Alice Angeloni/ LDR

Despite the loss of her home, Jan was thankful. At 5.40am on Sunday, she was on her way to work at Te Puia Hospital. By 8am, her caravan was gone.

"Had I been asleep in my caravan, I probably would have been out to Chile or something, or down in the deep blue sea," Jan said.

From here, it was just "pick up and carry on", she said.

"I'm lucky, I've got a job. A lot of friends have given me clothes. I'm staying at a mate's place for a while. It's all good."

Rick said he knew something was wrong when he woke up on Sunday and could not see water flowing in the creek behind his house.

It had been raining heavily since about 7pm the night before and that meant the creek should have been full.

After warning his partner that they might have a problem, Rick heard a gurgling noise and realised water had surrounded his house. 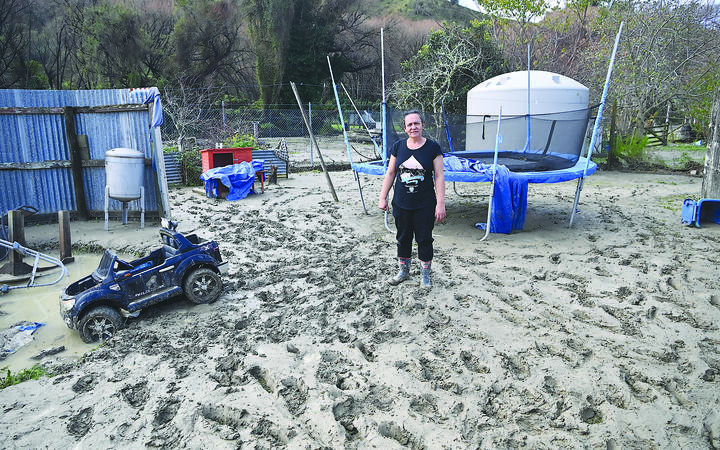 Megan Williams in front of the trampoline where her cat and the neighbour's chickens took refuge. Photo: Paul Rickard/ The Gisborne Herald/ LDR

Another resident, Megan Williams, said she was emotional.

She and her whānau thought the rain would never stop.

Chickens and a cat were perched on her trampoline trying to escape the water.

She motioned her hands showing the struggle of two guinea pigs furiously paddling to keep their heads above water. Her whānau managed to save all the animals.

They evacuated the property on Sunday and went to sleep at her mother's house. They could not use the toilets or showers at their own whare, she said.

Williams lives down the road from the township's transfer station, which is perched precariously on the bank of the Mangahauini River.

Rubbish is strewn around the transfer station. Its walls look like they have burst at the seams and river debris hangs on the fences. 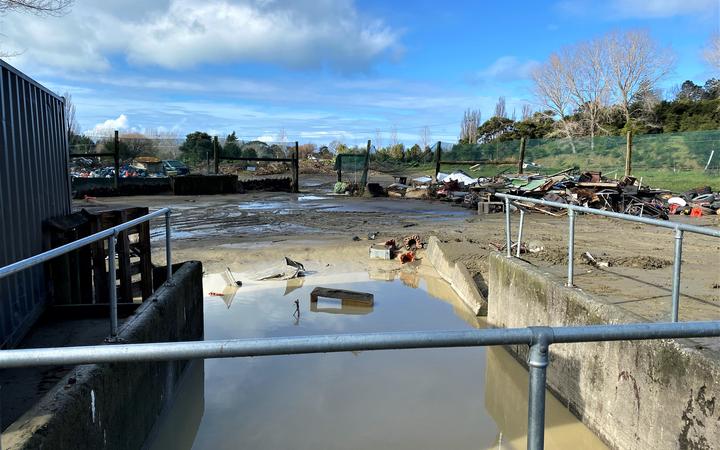 Rubbish is strewn around at the transfer station in Tokomaru Bay, which sits on the edge of the Mangahauini River. Photo: Alice Angeloni/LDR

When Local Democracy Reporting visited on Monday, the sun was shining, the sea near calm, and the Tokomaru community was out on the streets with shovels in hand.

Tamariki and kuia worked side by side shovelling silt left by the storm. Chainsaws whirred as trees were chopped and moved, carpets were stripped from homes and driveways cleared of thick mud.

There were still some jokes to be made, laughs about a beer fridge being swept away, and a tired "ka pai" uttered, with a smile.

There were kind words spoken of MP Kiritapu Allan, who had been out in their rohe, assessing the storm's damage despite being on leave with stage 3 cervical cancer.

Gisborne District Council said the full extent of the damage caused by the weekend's heavy rains was not yet known.

Up to 200mm of rain was recorded north of Ruatōria, as rivers reached capacity and surface flooding threatened houses and businesses along the East Coast this weekend.

Tokomaru Bay was one of the worst affected areas, with severe flooding in some parts.

The council reported that four homes were flooded and families were forced to self-evacuate, however no other evacuations were necessary. 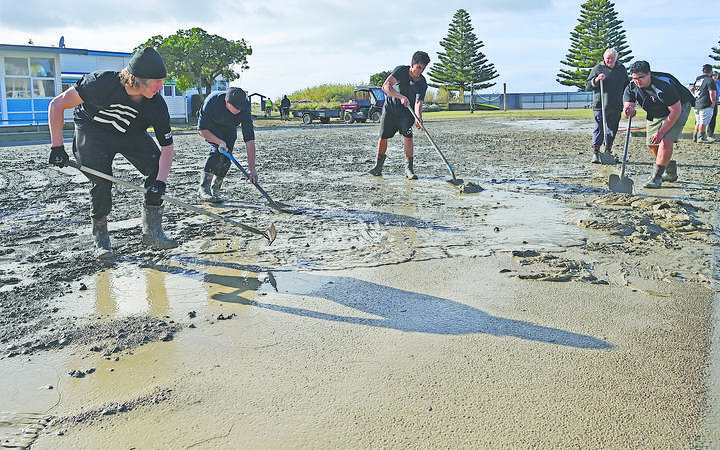 A team at work on the mud at Hatea a Rangi School, from left, Fergus Knight, Whetu Beale, Turoa Kohatu and Hauiti Kohatu. Photo: Paul Rickard / The Gisborne Herald / LDR

Kura was closed on Monday as a team of teachers, staff and volunteers cleared the mess left behind by a torrent of water that washed through their classrooms and administration block.

Only one classroom of three had not been affected.

"Just really overwhelmed by the kindness of our whānau to come and help clean up today," she said.

When they were able to set up a hub at one end of the kura, they would start distance learning for tamariki, she said.

"Today and yesterday was definitely a day to tidy up your own backyard and strengthen your own whānau place first."

Tamariki were at home enjoying squelching their feet through the mud.

"Chocolate milk," yelled one boy as he stomped in the mud.