Farmers on the East Coast, north of Gisborne, are in clean-up mode after a huge deluge over the weekend caused flooding and washed away roads. 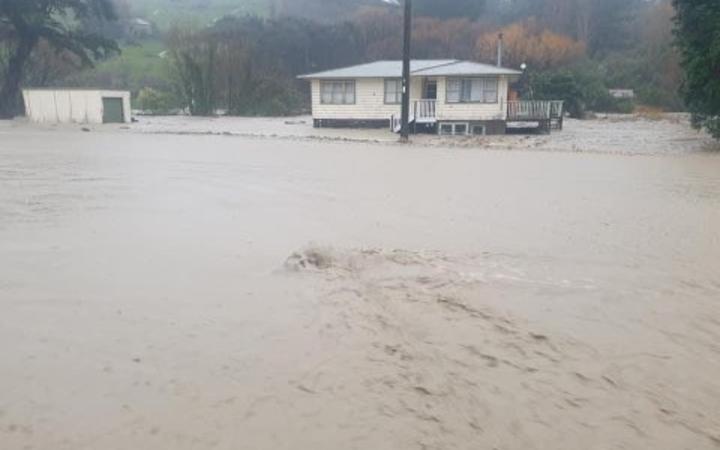 Homes in Tokomaru Bay were severely damaged by the flooding this weekend. Photo: Supplied / Colin Skudder

Tokomaru Bay sheep and beef farmer Colin Skudder said it started pouring down about 10pm on Saturday and did not stop for 10 hours.

Skudder said the water had receded but left a trail of destruction through his property.

"So far, we've got nine flood gates that go from my house down to the Tokomauru Bay township, and that's all boundaries to the main road, so all of those are just wiped out."

Skudder said reinstating the flood gates would cost about $70,000 alone.

He said all the culverts, used to divert water underneath roads, had also been washed out.

"Tokomaru Bay itself, the township, got closed as well. The river ended up going down the main road.

"This is probably the worst I've ever seen it."

It had been a hard year already - repairs after a large flood in July last year blew away the farm's budget with machine hire and fencing costs, Skudder said.

"We haven't really spent on contractors since then and then this came in, so this is going to do it even more before the end of the financial year," he said.

"It was a very quick event ... we know that there is damage to fences. We are still assessing the losses with farmers and we encourage people to get in touch with us so we know exactly where the need is across the district," Wilson said.

North Canterbury also experienced some heavy rain at the weekend, making it challenging for farmers who were feeding out.

The region experienced drought this year but Cheviot farmer Greg Chamberlain said it had gone from one extreme to another.

"It's been dry here for quite a long period with the drought and most people in the district are pretty short for feed and been feeding out to stock and the wet just compounds that really.

"Trying to feed out when it's wet, and utilise feed without wasting it ... we're pretty limited and the stock are probably lighter than some people would like."

Chamberlain said he had moved his animals off winter crop pastures on Sunday morning to avoid them damaging the soil while grazing.

Hurunui District councillor and cattle farmer Vincent Daly said the intensity of the rain falling on what was already saturated ground was the worst part.

"We've had about 60, 70 [millimetres] but it was so intense that we actually got quite a bit of surface flooding because yesterday afternoon we would've got, in a couple of hours, about 35 mils.

"It sort of just ran everywhere, I think because we had a couple of hundred [millimetres] in the rain when Ashburton got flooded."

Daly said he was also worried about waste as stock could trample or ruin feed in wet conditions.