The tornado that swept through South Auckland this morning killed one worker, injured another and left a trail of wreckage behind. 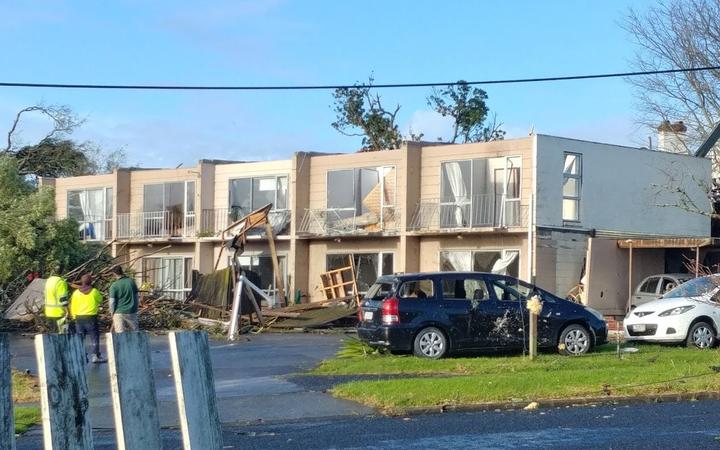 About 1200 homes in Papatoetoe were affected - most are without power, while 60 are uninhabitable.

Auckland Emergency Management Controller Parul Sood said those who have chosen to stay in their homes overnight should have an evacuation plan with more bad weather forecast overnight.

Anyone affected can go to the Civil Defence welfare centre at the Ōtara Pool and Leisure Centre which has been opened in Newbury St.

Sood said the welfare centre will be open all through the night.

She said accommodation has so far been arranged for a small number of people.

The storm lifted roofs, toppled trees, shattered windows, downed powerlines and sent trampolines flying in the suburb of Papatoetoe at around 8:30am.

A worker was killed when the tornado struck a freight container hub in Wiri Station Road.

Two others were taken to Middlemore Hospital - one is in a moderate condition and the other has minor injuries.

Several containers were toppled by the strong wind.

Ports of Auckland says it operates the site with several other businesses but none of the injured people worked for the company.

It said it is shocked by the freak event and its thoughts are with the people affected.

WorkSafe is investigating the death.

One Papatoetoe street, Freyberg Avenue, has borne the brunt of the damage with branches of trees strewn across the street, shards of glass cover the footpath, and pieces of corrugated iron hang from drooping powerlines.

A resident of the street said the tornado felt like a washing machine on full spin.

"Our windows smashed and after that it all kind of calmed down," she said. "Walked out into the street and there was like all our neighbours assessing all the damage, there was a trampoline in the power pole and trees were dug up from the ground."

Auckland Mayor Phil Goff, who visited the scene this afternoon, said the centre was helping people whose homes were no longer habitable and supporting others with whatever was needed.

"I'm standing where the tornado went through and the devastation is pretty remarkable," Goff said.

"House after house with damage to their roofs, their fences blown over.

"Just across the road from me, a truck was blown off the road, right through the fence and into a house."

Many homes were no longer weather proof, as windows had been smashed by flying debris or roofs damaged, he said.

"People are working flat out here to get tarpaulins over the roofs before the weather breaks again.

"The power is off until such time as all the power lines can be repaired. The damage to power lines is quite extensive - there are lines down everywhere."

The death of one man in the freak weather event was tragic, but Goff said many others had been lucky to survive.

"There are so many stories of good luck here - people have said if we had been out on the street, we would have been cut in half by flying corrugated iron or power poles coming down or power lines across the road".

Goff urged people to take caution while cleaning up, as one person had already fallen from a roof.

Goff is also sending his condolences to the family of the worker, who died when he was swept up by the freak wind and thrown against a container.

Despite the devastation, Goff said the tornado had brought out the best in people, with one building company helping people weather proof their homes for free.

OMG! The roof of my Aunty’s house came off in this morning’s Papatoetoe tornado! Also parts of the fence that used to go around the whole front. Sending love to the whānau of the Ports of Auckland worker that died. https://t.co/cI8OIGx7g4 pic.twitter.com/FSPVqRszs8

More than 20 fire crews from across Auckland are helping with the cleanup and a Fire and Emergency command unit is at the scene. 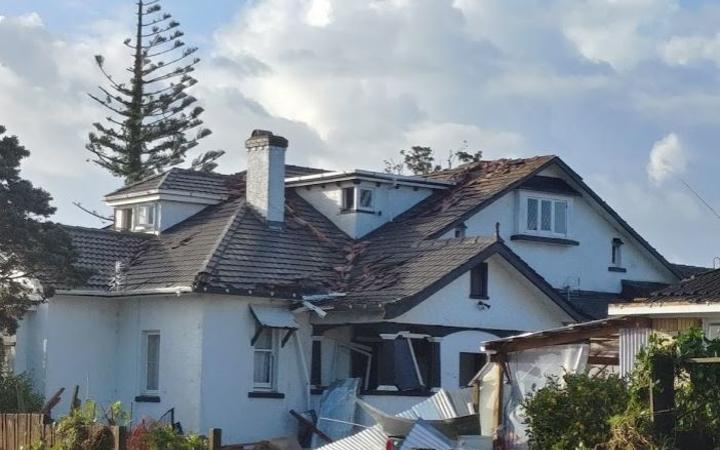 RNZ reporter Katie Doyle, who was at the fire service cordon at Freyburg Avenue in Papatoetoe this morning, described it as carnage saying there had been a lot of damage.

She said the street was strewn with branches and one tree had been completely uprooted. There were pieces of corrugated iron ripped away, power lines down and roof tiles ripped off by the tornado, she said. 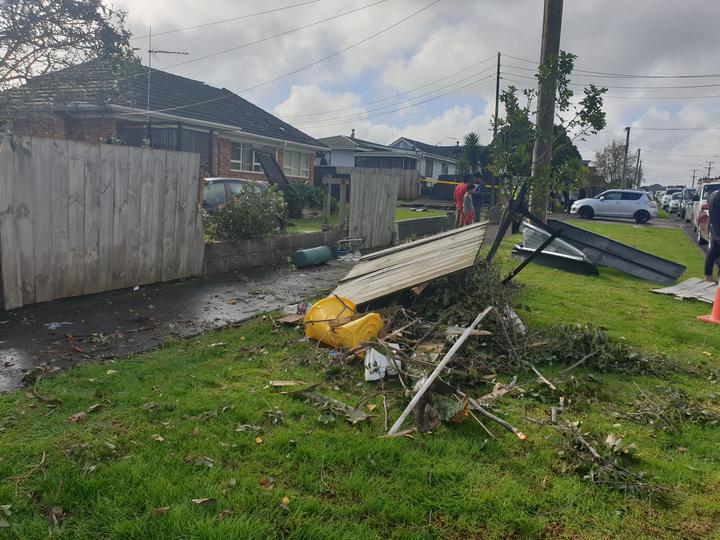 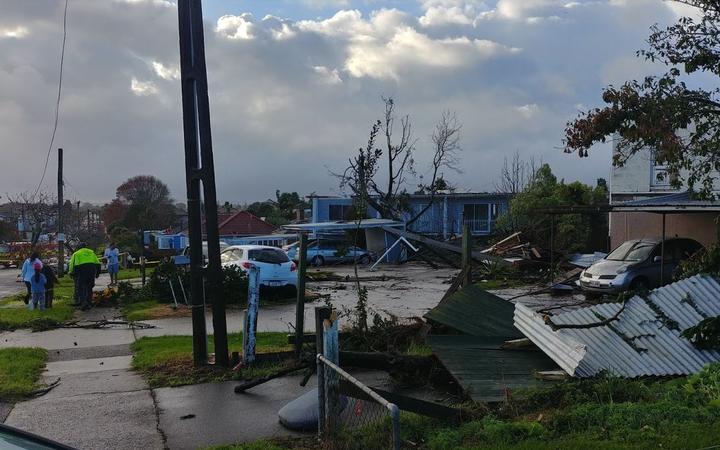 Binpin Thakkar who lives on Hayworth Road, said his whole house shook in the tornado and he feared it would be blown away.

He said he could see roof tiles flying down his street and there is broken glass from shattered windows everywhere.

Thakkar said it was a frightening experience, as the tornado struck with force.

He said at the time trees were flying about and all the fences on his property have been damaged.

"It was very scary, everything inside the house, the whole house was shaking actually, we were thinking the whole house will go away. The outside property damage like glass damage and roof damage and our neighbour's house tiles were actually flying."

He said neighbours are rallying to help to clean up the damage.

Oh was this from this mornings tornado In Papatoetoe?

This is my sisters street! pic.twitter.com/Usq2d5X1bA

There is a heavy police presence in the areas most affected by the tornado.

MetService meteorologist Andrew James said the tornado was due to a front that moved towards Auckland overnight.

James said the bad weather has now moved away from Auckland. 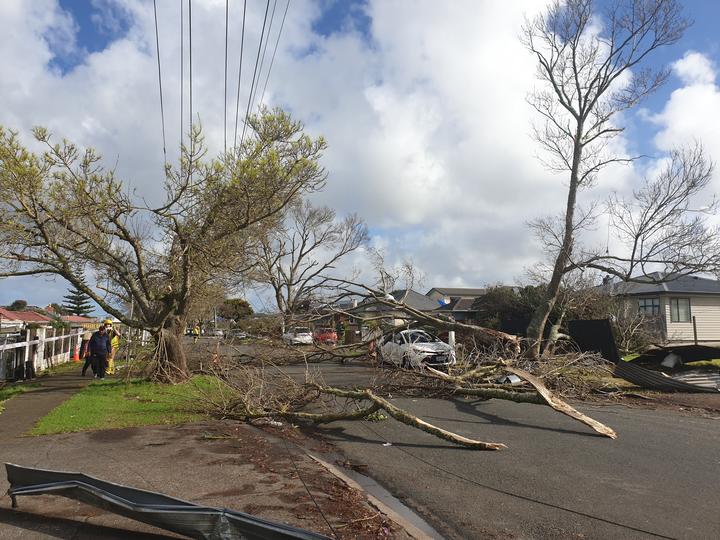 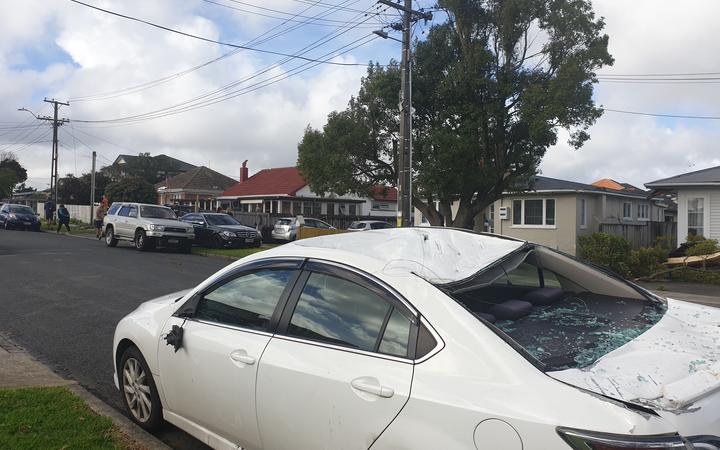