A Dairy Flat resident says a tornado last night sounded like a plane crashing into her house, while another this morning hit industrial buildings in East Tamaki.

MetService has confirmed the damage was likely to have been caused by tornadoes and has warned there may be more in coastal Auckland, Bay of Plenty, Coromandel and Rotorua.

Another tornado in East Tamaki this morning caused structural damage to industrial buildings in that area, with one witness describing the tornado's path through a building like seeing 'a knife cut through cake', while another tornado was reported in Papamoa in the Bay of Plenty. 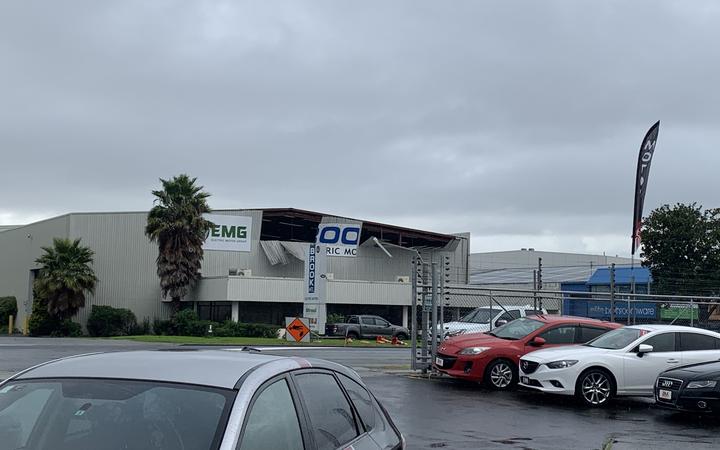 In Dairy Flat, Paterson's house escaped serious damage, but she said the tornado wreaked havoc in her garden, dented her roof with debris and popped manhole covers open.

She said she first woke up to a huge downpour of rain, and decided to check her 3-year-old was okay.

"As I was walking down the hallway there was a massive flash of light outside and then the power all went out," she said.

"I went back to tell my husband about the lightning and we noticed there was no thunder. All of a sudden, we were like 'what is that sound?' It just got louder and louder.. then all of a sudden our tramp just went smash into the side of the house. Then it just flew up onto the roof, smashed on our roof, took out our massive commercial playground."

Paterson said her family spent about two minutes inside yelling "what do we do?", before an abrupt silence.

"It was over. The devastation was left behind. But if you look outside our property.. just the trail. All these big, beautiful, old trees, they've just been cut in half, or just demolished."

Contractors were at her house this morning restoring the power and water, and Ms Paterson and her family were out for breakfast before tackling dirt that blew into the house last night.

MetService meteorologist Alwyn Bakker said 49 millimetres of rain fell in some areas of Auckland from midnight to1am and the Skytower recorded a base wind speed of about 75 kilometres-an-hour, in the same hour.

Fire and Emergency said it sent crews to 24 weather-related callouts in Auckland and Northland overnight.

Bakker said 49ml is an intense burst of rainfall in a short space of time.

"So that is in the downpour territory. There would almost certainly have been some flooding.

"That is an awful lot of water to come out of the sky in just an hour."

MetService said most of the wet weather has passed through Auckland.

However, the NZ Transport Agency advised earlier this morning that due to flooding, a detour is in place on the SH1 northern motorway. The Oteha Valley Rd southbound on-ramp is closed.

The wild weather in the Auckland region overnight has given a boost to the city's depleted water supply.

The water levels in the Hunua and Waitakere dams have risen just over two percent to 51.3 percent.

The normal water level at this time of the year would be 78.53 percent.

In the past seven days, water levels in the dams have risen by more than 100 millimetres.

However, Watercare says significantly more rainfall is needed and Aucklanders should continue with conservation efforts.