The Department of Conservation is predicting the critically endangered kākāpō will breed this summer. 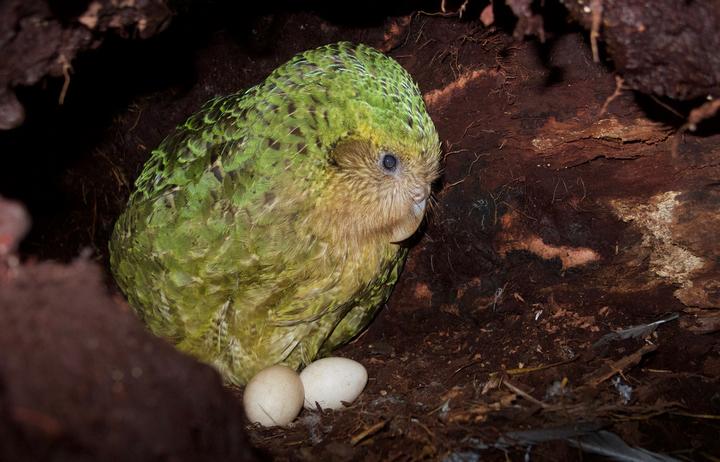 Kākāpō last bred in early 2019 when a record 73 chicks hatched.

Department of Conservation kākāpō operations manager Deidre Vercoe said the flightless parrot only breed when the rimu trees put out masses of fruit.

This typically takes place every two to four years.

Kākāpō only breed if more than eight percent of rimu tips bear fruit, with the higher percentage suggesting the more likely females were to breed, she said.

"Fruiting tips can be lost over winter, so we will recount in the spring to give us a clearer number of nests we're likely to expect," Vercoe said.

Ngāi Tahu representative to the Kākāpō Recovery Group, Tane Davis, said the signs for a 2022 kākāpō breeding season were promising.

"Ngāi Tahu Whānui take great interest in participating and supporting the recovery of kākāpō by sharing their matauranga Māori knowledge, and managing the Mauri Ora Kākāpō Trust on behalf of Kākāpō Recovery.

"All donations go directly to supporting the Mauri Ora - the vitality and health - of this critically endangered taonga species."

But Vercoe said kākāpō still faced many challenges, including infertility, diseases, and predators.

The current kākāpō population is 204

"Soon we'll run out of space on these offshore havens," she said.

"That's why initiatives such as Predator Free 2050 are so important. It will be fantastic to one day return them to the mainland.

"As the population continues to grow, it highlights the need for more predator-free homes so we can secure the future of kākāpō."