A Covid-19 modeller says it is likely the case numbers in Melbourne will climb. The cluster has grown to nine cases across three households. 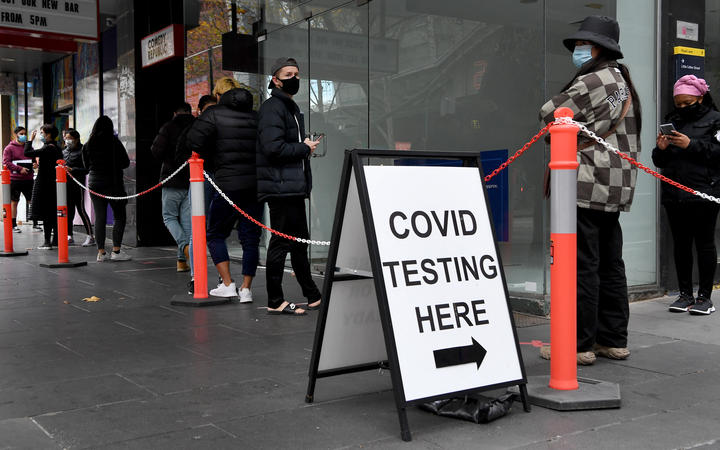 One person who tested positive attended a football match at the Melbourne Cricket Ground where more than 20,000 fans were present.

University of Canterbury mathematician Mike Plank told Morning Report that testing over the next three or four days would give a better picture of the situation.

He said the presence of the Indian variant was a concern because it was highly infectious.

"This cluster has grown very quickly to nine cases now and several of those have been infectious in the community for up to a week so it's likely they will have passed the virus on to other people.

"The other big worry is the missing link: the fact that we don't know yet where the outbreak originated from, and anytime there's a missing link there's a possibility there's a whole lot of cases you haven't found yet."

Finding the link would help understand the possible extent of this cluster, he said. It came down to testing and contact tracing.

A picture of how many cases might be in the public would become clearer over the next few days, he said.

"It may be that it's not too bad that there aren't too many cases, but it may be that ... it is the tip of the iceberg and we start to see a lot more in which case it's going to take a longer time to really find that out.

The Indian variant of the virus being involved was "concerning".

He said there were several variants in India and it was not clear which one Australia was dealing with.

"It could well be the one that's threatening to derail the reopening in the UK at the moment and it's got people quite worried over there. Recent data that actually just came out over the weekend showing that this is very highly infectious, more infectious even than the new variants that came out at the end of last year.

"So this is definitely a reason to be extra cautious because this has the potential to spread really really quickly."

New Zealand's travel bubble with Melbourne had been open the whole time, but it was paused yesterday.

"Given that we acted quickly, the risk of that at the moment is quite low for New Zealand. It's good that we did that pause."

University of Melbourne epidemiologist Tony Blakely told Morning Report it was worrying that a family of five who tested positive for Covid-19 had been infectious for up to eight days and have been out about.

Previously, an infected person would pass the Covid-19 virus on average to about 2.5 people. The Indian variant is probably north of four or five people.

"This is a potentially serious situation. It's not panic stations yet."

He said it was paramount to look closely at those five cases and where they had been.

"The best-case scenario here is those five cases have stuck together, not been to many places."

Both Blakely and Plank said Melbourne could expect tougher restrictions.

"What happened here is a lesson for Australia and New Zealand. This comes from somebody coming out of quarantine in South Australia where they pick up the infection in quarantine - that's because we don't do quarantine well so there's the lesson: we need more Howard Springs or those types of facilities.

"Then somehow it's got through to this family of five. What is currently the index case, the 60-year-old gentleman, has no obvious links back to that previous case from South Australia maybe it's one of the other four members in the family but until we find that link and we can be confident that we've tested all the way around that we do have a bit of a mystery on their hands."